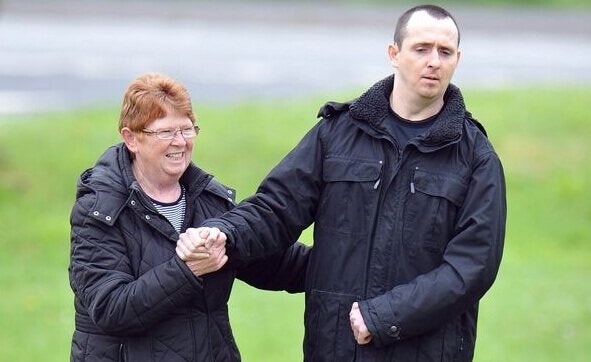 Paul Pugh is a Welsh man who was brutally attacked by strangers one day. One of them hit him very hard in the head. After a while, Paul developed an awkward symptom: pathological laughter, a kind of brain dysfunction.

Pathological laughter is laughter you can’t contain and that has nothing to do with the situation it happens in. On paper it might sound hilarious, but it’s actually a very serious condition. The condition has a few different names, and the most technical one is “gelastic epilepsy.” Some of its other names are “pseudobulbar affect” and “emotional incontinence.” It was actually Paul Pugh’s case that popularized the term pathological laughter.

“Perhaps I know best why it is man alone who laughs; he alone suffers so deeply that he had to invent laughter.”
-Friedrich Nietzsche-

Paul Pugh’s case is one of the best known ones. His tragic story started one night in 2007 when he was out drinking with friends. On his way home, he ran into four men who started to beat him for no reason at all.

The beating was so severe that they fractured his skill. Paul, who was 27 years old at the time, was put into a coma for two months. He had to re-learn how to do even the most simple tasks: walking, eating, talking, etc. But when it seemed like he’d finally recovered from everything, that’s when something strange happened.

He went to a meeting with his doctors where they started to tell him about consequences of his beating. This meeting had a terrible effect on Paul. He felt a very strong urge to cry, and he actually did in his mind and heart. But on the outside, all he could do was laugh. He had pathological laughter. He was crying on the inside, but laughing on the outside.

At first all it meant for him was social rejection. After some time went by, the doctors finally realized what was happening to him. They called it “pseudobulbar affect” (PBA), which meant there was a disconnect in his brain.

Pathological laughter and what causes it

Pathological laughter can be very distressing for the people who have it. They also tend to isolate themselves because of their “inappropriate” behavior. Many speak of how awful it is to feel one emotion intensely but express another emotion that has nothing to do with it.

Pathological laughter and crying appears for a lot of different reasons. It usually comes after some kind of trauma, like in Paul’s case. But there are some abnormal neurological conditions that can cause it too.

Brain tumors are another possible cause. As far as we can tell, this happens because of a disconnection between the brain, cerebellum, and medulla oblongata. We also know that the hypothalamus plays a part in the condition.

Other kinds of pathological laughter

There are also psychiatric cases of psychological laughter with different causes. This is where the general term “emotional incontinence” applies. It has to do with mental conditions where someone’s emotions are expressed in an exaggerated way. They can’t hold in their laughter, tears, or any other emotion. Dementia from vascular problems is associated too.

Even some kinds of schizophrenia can cause pathological laughter episodes. It can also happen as a result of taking psychoactive drugs: it’s common knowledge that marijuana use makes a lot of people laugh uncontrollably. Even some conditions on the autism spectrum include it as a symptom.

The saddest part of it all is that people with this problem usually have other side effects too. According to a study done by the psychology department at the University of Freiburg (Germany), more than half of people with this condition demonstrate other symptoms on top of the ones we’ve talked about. They generally suffer from a decrease in IQ along with other cognitive problems.

There are not many treatment options for pathological laughter. In short, there is no cure. But people like Paul Pugh are inspiring examples; he’s managed to detect the moment right before a pathological laughter episode. He immediately thinks of unpleasant images, which stops him from laughing. Unfortunately, however, his condition is still affecting his life.

Using Humor as a Go-To Mechanism for the Bad Times
We've all seen someone talk about something serious with a smile on their face. It can be necessary, but using humor as a defense mechanism can go too far. Read more »
Link copied!
Interesting Articles
Culture
Stephen Hawking Quotes: 21 Reflections on Life

Culture
Eduardo Galeano: The Biography of a Libertarian

The name Eduardo Galeano is synonymous with good literature, social commitment, and ethics. His book Open Veins of Latin America is…

Culture
Learning to Say No at Work (Workplace Assertiveness)

Culture
5 Keys to Happiness at Work

No matter how much you love your job, it's not uncommon for you to feel overwhelmed or drained once in a while. The commitments, responsibilities, and limitations it imposes on…