Paul Auster: A Writer of Fate, Love, and New York

Paul Auster often writes in the second-person singular. This unusual style makes the reader feel more involved in every every word of his stories. 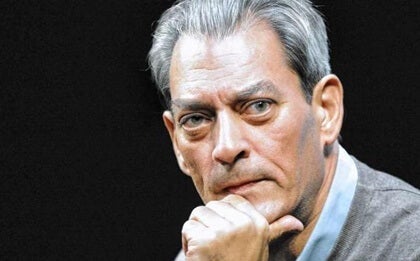 Many people define Paul Auster as an illusionist, a true wordsmith. He’s the writer of chance, of destiny, of love, and above all, of that city that defines and inspires him: New York. Auster has the unique ability to transform the banal into the extraordinary and capture us in his bewitching narrative.

People often say that, after one line of a Paul Auster book, you either love him or hate him. Some writers simply don’t fall into a middle ground, and Paul Auster is one of them. While he has his fair share of critics, plenty of people (and publishers) adore him. His trilogy City of Glass made him famous all over the world and introduced readers to what would become a household name.

Auster is primarily a novelist, but he has also written scripts and worked as a movie director. With his signature black clothing and his devotion to French poetry and Samuel Beckett, Auster has never had any qualms about taking a stance on social and political issues. He did so during the Iraq war, and even now, in his 70s, in the Donald Trump era.

We’re talking about one of the greatest contemporary North American authors. He skillfully combines existentialist issues and even touches on magic realism. His is a unique voice that very recently gave us his most epic novel, 4321. This is a splendid book that was seven years in the making.

“The world is so unpredictable. Things happen suddenly, unexpectedly. We want to feel we are in control of our own existence. In some ways we are, in some we’re not. We are ruled by the forces of chance and coincidence.”

Paul Benjamin Auster was born in 1948 and grew up in South Orange, New Jersey, in a family of Jewish and Polish heritage. His father, a businessman, supported the family. Auster appeared to have mixed feelings about his father. In his novels, he often described him as a man who was bored with books, who fell asleep in movies, and who his mother tried to leave after their honeymoon.

When he was little, books were a respite for Auster. He took refuge in a local public library, which gave him a whole universe to discover. His uncle, Allen Mandelbaum, was a great translator who also passed on his love for reading. He encouraged the young Auster to read the classics and immerse himself in the world of literature. That world started to shape him, from an early age, into the great writer he became.

When Auster was six years old, he skipped a few grades because his reading and writing abilities were ahead of his class. As he explains it, in those years he was convinced that the alphabet was composed of more letters: a backward L and an upside-down A.

When he reached university, it was inevitable that Auster would continue along the same path, guided by literature and philology. So, he decided to study French, Italian, and English literature at Colombia University in New York. He worked as a translator until the Vietnam War began. It was then that he decided to go to France.

His first books and City of Glass

Paul Auster’s life has always moved between the two cities that shaped his life: New York and Paris. When he was young and before the success of his books, he held multiple jobs in both cities. He made his first attempts at working in film. Auster worked at a gas station, and later he decided to work as a translator in France. He focused on important authors such as Mallarmé, Jean-Paul Sartre, or Simenon.

He published his first novel Squeeze Play (1984), using the pseudonym Paul Benjamin. It wasn’t very successful, but he didn’t give up. It wasn’t until his father passed away that Auster was able to dedicate himself fully to writing. He inherited a modest sum of money that allowed him to write about that sense of loss in his memoir, The Invention of Solitude.

In 1981, he met novelist Siri Hustvedt, and they later married. This fruitful and creative time in Auster’s life produced the City of Glass trilogy (later renamed the New York trilogy). The books were a resounding success, and the name Paul Auster started to mean something to publishers all over the country. Later, he wrote Mr. Vertigo and Moon Palace.

In 1993, Paul Auster received the French Prix Medicis for his novel Leviathan. The 90s were a particularly fruitful time for the author who, as we mentioned above, loved movies as much as he loved literature. His short story, Auggie Wren’s Christmas Story was adapted for film. Later, he wrote Smoke and Blue in the Face, which premiered in theaters in 1996. Critics haven’t always been supportive of his attempts at filmmaking, however.

Between 1999 and 2005, he wrote Timbuktu, The Book of Illusions, Oracle Night, and The Brooklyn Follies. These novels show his maturity and sensitivity but always maintain a strong narrative structure. In 2006, he won the Prince of Asturias Award for literature.

Paul Auster writes about fate, love, destiny, and the most humdrum day-to-day things that lead to fascinating events. His style seems simple at first, but the interlacing stories, the types of narrators he uses, the way the narrative splits at times, etc., gives his books a complex and ultimately perfectly magical structure.

These enigmatic touches are fascinating and charming. To read Auster is to share his love for books. As he says, reading is a way to touch people’s lives and feed our empathy. His novels reveal human complexity, which helps the reader learn more about themselves, and survive in their own way.

An admirer of Kafka, lover of France and New York, Auster is a literary reference that deserves a place in your personal collection. About two years ago, he gifted the world his new novel, 4321, which he started writing when he was 66, which is how old his father was when he died. We hope that these 866 exceptional pages aren’t the last we’ll see from this brilliant author.

Haruki Murakami: Biography of a Best-Selling Japanese Writer
Haruki Murakami has captivated the world with his puzzling characters, surreal worlds, and the delicacy of the emotions he transmits through his books. Read more »
Link copied!
Interesting Articles
Biographies
Ruth Benedict and Her Search for Cultural Models