Pablo Pineda has Down's Syndrome, but that didn't stop him from going to college and overcoming the challenges that people with this condition face. Pineda is the first European with Down's Syndrome to get a college degree. 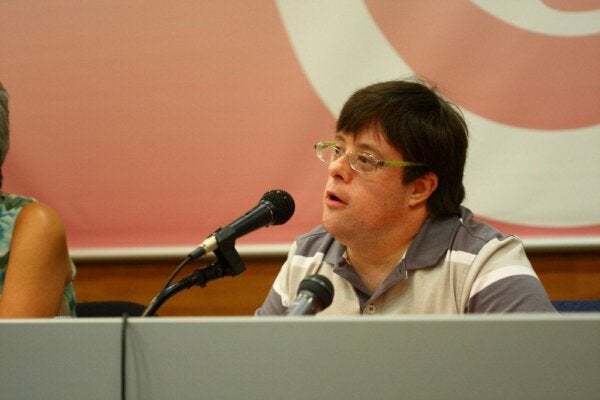 Pablo Pineda Ferrer, from Málaga, Spain, is the first European with Down’s syndrome to get his college degree. Down’s syndrome is named after the British doctor John Langdon H. Down, who was the first to describe the clinical traits pertaining to this condition in 1866. Dr. Down wasn’t able to determine the cause of the syndrome, however.

The stigma surrounding Down’s syndrome has endured for many years. Children born with this abnormality used to be hidden from the public.

Over time and thanks to the work of activists who raise awareness about these issues, people don’t see these differences as such a bad thing anymore. There are still plenty of limitations, of course, especially for people with Down’s syndrome. To understand better what life is like for those with this genetic abnormality, we’re going to share the story of someone who’s living it and overcoming practically every obstacle in his way. That man, of course, is Pablo Pineda.

As we mentioned above, Down’s syndrome is a genetic abnormality caused by the presence of an extra chromosome. Human cells have 46 chromosomes divided into 23 pairs. One of those pairs determines the individual’s sex, and the other two are numbered from 1 to 22 based on their size.

People with Down’s syndrome have an extra full or partial copy of chromosome 21. Today, trisomy 21 is the main cause of intellectual disability and the most common genetic abnormality.

Down’s syndrome occurs spontaneously, with no apparent cause or way to prevent it. It exists in all ethnicities and countries. Approximately 1 in 700 babies are born with Down’s syndrome.

Maternal age is the only factor that’s been shown to possibly increase the risk of giving birth to a baby with this condition. Mothers over 35 seem to have a slightly higher risk. Inheriting the syndrome from a parent is rare, occurring in less that one percent of cases.

The story of Pablo Pineda

Pablo Pineda was born in 1974, the youngest of three siblings. He successfully completed elementary school in spite of the difficulties he faced along the way.

Pineda went to a public school and he always remembers it fondly. He believes that the chance to interact with a diverse group of people is a great learning opportunity. Pablo Pineda also thinks that schools for students with special needs are a product of another time, when Down’s syndrome was something that had to be hidden away.

Among other things, the support and help that his family has given him has been the most important factor for his success. That’s why he so strongly emphasizes the importance of avoiding helicopter parenting. In Pineda’s opinion, you should let children learn from bad experiences and always motivate them.

Pineda studied teaching at the university and is currently getting his degree in Psychopedagogy. Through an interesting twist of fate, he’s also worked as a film actor in the movie Yo, también [Me, too] (Alvaro Pastor y Antonio Naharro, 2009). Thanks to this role, he won Best Actor at the prestigious San Sebastian International Film Festival.

In his speeches, Pineda always talks about the need for inclusion of people with disabilities at the university level, since a college degree is usually a requirement for future employment. He reminds his audiences that only six percent of people with special needs attend college, which is a huge barrier to entering the workforce, since companies are looking for employees with a university education.

Access to higher education should be a personal choice, not something determined at birth. During his talks, Pineda emphasizes social awareness and access to education for everyone who wants to study, especially those with special needs.

In 2013, Pablo Pineda published his first book, El Reto de Aprender [The Challenge to Learn]. In it, he reflects on education, teaching, and learning. He also talks about his educational experiences as a person with a disability. In 2015, he published a second book called Niños Con Capacidades Especiales: Manual Para Padres [Children with Special Needs: A Guide for Parents]. In this second book, he offers advice for parents of differently-abled children. The basic premise is that they aren’t sick and they don’t need pity or overprotectiveness.

Pineda believes that there are no “disabled” people, just people with different abilities. He argues that society needs to evolve and be more diverse and open and incentivize people to stop treating those with Down’s syndrome like children. Instead, we should be fostering their skills and independence from an early age.

His story is a tale of grit and determination, of waking up every day ready to keep learning and struggling. Hopefully, his example will help get rid of the stigma of Down’s syndrome and create a fairer and more egalitarian society in which everyone has the same opportunities. In conclusion, we can all learn from Pablo Pineda’s example.

Niccolò Machiavelli was an important philosopher who people tend to associate with the Italian Enlightenment. However, he was also a…

Art and Psychology
Giotto di Bondone, An Encounter Between Art and Faith

Giotto di Bondone was born between 1266 and 1276, in Vespignano, near Florence, Italy. He was a rather influential 13th-century…

Culture
Sexting and Online Grooming: Risks of the Digital Age

This digital transformation era is also changing our society as a whole. ICTs, or information and communication technologies, offer many…

Culture
Want to Fall in Love? Ask and Answer These 35 Questions

According to an investigation, two people can fall in love after giving sincere and authentic answers to 35 questions. The meeting…