Although it might seem contradictory, most overprotective parents aren't very affectionate with their children. Read on to learn more! 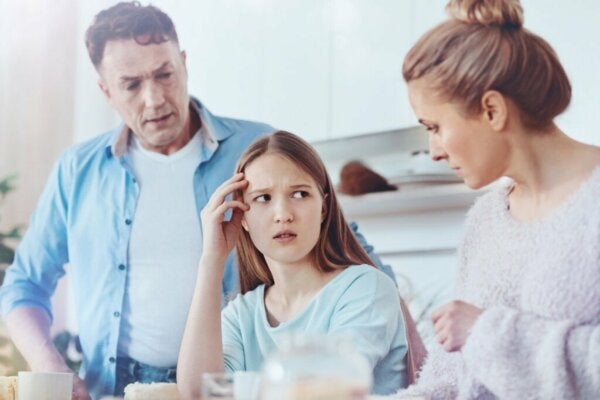 Overprotective and unaffectionate parents can harm their children. Some people believe that a good strategy for raising children involves a mixture of authority and “small doses” of affection. This way of understanding shows of affection and emotion has had a negative impact on many families. In fact, it’s directly opposed to transformative, dynamic child-rearing, where emotions play a fundamental role.

Overprotective and unaffectionate families are another version of a strange kind of emotional repression that has existed for generations.

Someone who suffers abuse in their family reflects it in their behavior. Experiential avoidance is a behavioral escape from the reality the individual finds themselves in. Their environment doesn’t offer any positive reinforcement and their behavior is a response to that. Experiential avoidance is an escape from pain and, consequently, life itself.

Overprotective and unaffectionate parents aren’t necessarily negligent or physically abusive. Although they love their children, they don’t show it.

When parents are highly overprotective but don’t express love or affection in any way, it’s easy for a child to become trapped in that family dynamic. The behavioral cues are contradictory, claiming to protect the child but not providing a safe refuge at home. From the outside looking it, it seems like the parents are doing a great job. However, the lack of positive reinforcement or displays of affection are hurtful to the child. Not to mention the absence of any encouragement for the child to develop their independence.

An example of an overprotective and unaffectionate family

To understand this dynamic in a better way, let’s look at an example. Imagine a 40-year-old man going to see a psychologist. He doesn’t know what’s been happening to him for years. He has set values, especially in terms of what he won’t tolerate. Nevertheless, the logic that he learned in his family was defined by what he wasn’t supposed to do. This conditioned him to be highly sensitive to criticism but practically impervious to reinforcement.

His mother almost never kissed or hugged him. The few times she did were after a “scare” or “when he was sick”. She picked him up from school, he was always well-dressed, and she was a great cook. His mom took care of everything.

This patient talks about feeling incapable of completely enjoying certain experiences. He worries a lot about bad things happening to his children and barely enjoys their achievements. He closely associates feeling emotions with tension and anxiety. In addition, he often gets negative feedback at work due to his depression. No matter what he does, he never feels qualified.

The man in the previous example is the result of a helicopter mom and an absent father. When one parent is absent, the other parent often overcompensates. The result is excessive attention that ends up being a barrier to developing autonomy and independence.

Psychologist Holly Schriffin and her colleagues at the University of Mary Washington noticed how helicopter parenting affects college students’ self-determination and well-being. They discovered that this type of parenting is associated with anxiety and depression. The long term-effects are general dissatisfaction with life.

Some parents constantly supervise their children, but they don’t love them unconditionally.

I’m not hurting or helping you

Some children lack love and affection in their lives. That’s true even with parents who aren’t explicitly cold, aggressive, or negligent.

Many parents use expressions of love and affection as a child-rearing tool. This is also known as symbolic rejection, often expressed verbally as implicit forms of punishment. For example, “I don’t love you when you act like that” or “I love you, especially when you behave as well as you did tonight”.

Children and teens interpret these kinds of statements as evidence that their parents don’t love them for who they are. Love should go beyond success and good behavior. From a child’s point of view, this kind of attitude teaches them that love is transitory and merit-based, meaning it’s something you have to earn.

Consequences of overprotective and helicopter parents

Imbalanced parenting can produce brilliant children. However, that academic advantage comes at a cost. This parenting style doesn’t fully prepare children for the real world. They develop a codependent personality because they grow up in a place where they have no opportunity to take on responsibilities and make their own decisions.

Psychological studies repeatedly show that teens and adults with anxiety disorders, particularly those centered on social interaction, are more likely to have had overprotective parents.

In addition, studies show that anxious parents tend to have anxious children. That’s because they teach them that the correct reaction to what life throws at them is fear, worry, and emotional abstinence.

Helicopter Parents and Agenda Moms: Parents Who Manage Their Children’s Lives
We use the term helicopter parents and agenda moms to refer to those parents who expect to control and organize their children’s lives completely. Read more »
Link copied!
Interesting Articles
Family
Perinatal Grief and Mourning: Phases and Protocol