Olive Oatman, the Twice-Captured Woman with the Blue Tattoo 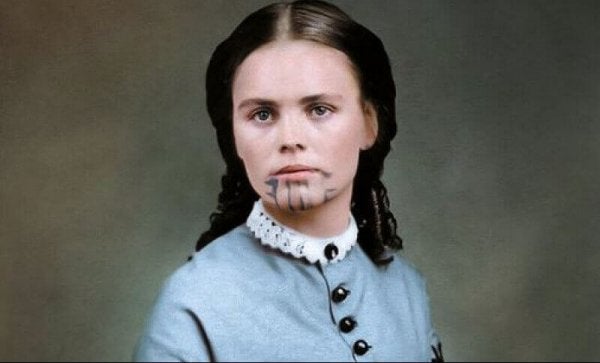 Olive Oatman is known as the mysterious woman with the blue tattoo on her chin. Kidnapped as a child by the Yavapai Indians, later taken by the Mohave Indians, she was finally rescued by her brother. She dedicated part of her life to talking about survival and the strength of human beings.

Maybe you’ve come across this story. The protagonist’s serene face draws us in. But then her eyes, and most of all, her wild, tribal tattoo contradict her overall appearance. She is clearly more than a nice, well-educated 19th century lady.

Olive Oatman went through two tragedies that marked her for life. First she lost her family to an attack by the Yavapais. Then, she was taken from her second family, the Mohaves.

Olive Oatman was not just an average woman of her time. She was a woman who went through some big trauma in her life. Someone who tried to survive and adapt to every setback fate had in store for her. And she survived, that’s for sure. Her admirable life is collected in the books Captivity of the Oatman Girls (1856) and The Blue Tattoo: The Life of Olive Oatman, by Margot Miffin.

However, there is something about Olive’s life that we often don’t talk about. Olive Oatman never felt as free as when she lived with the Mohave. In fact, almost 100 years later, a small city was named after her. It was where this young girl lived with Native Americans and where, interestingly, she was happier than ever.

We’re in the year 1850, in the arid but majestic landscape of Colorado. In the distance, on a lonely, stony road, we see a caravan of settlers making their way with their animals, carts, and high hopes of settling in the “new world.” However, the new world was already inhabited by legitimate owners who were not going to just give their land to these conquering foreigners with their airs of greatness.

Among these “conquering foreigners” was the Oatman family. They were Mormons led by the fanaticism of spiritual leader Pastor James C. Brewster. It was his brazen “charge forward” attitude that would inevitably lead them to disaster.

After all, they knew nothing of these lands, and they refused to listen to the warnings either. Their purpose was so firm and their faith so blind that they didn’t realize the land already had owners. The owners were a wild and quite violent tribe: the Yavapai.

The Indians killed practically all of the pioneers in the expedition. Afterwards, they decided to take two pioneer girls as slaves: Olive Oatman, 14, and her sister Mary Ann, 8.

After the trauma they went through, the two little girls didn’t see much improvement. They went through almost a year of abuse, hunger, and continuous humiliation by the natives who despised the white man so much. However, the girls’ luck changed thanks to a neighboring tribe.

Life with the Mojave

This tribe was the Mojave. It was they who decided to rescue the girls by making an exchange. They traded several horses for the two captured girls. When the deal was sealed, Olive and her younger sister started a new life. A life completely different than the indigence they had been subjected to.

They were adopted by the Espanesay and the Aespaneo families. Welcomed by a land full of beauty, wheat fields, and poplar forests. A place where they could sleep every night in the company of a friendly people.

Quite a few years passed, where Olive mourned the loss of her parents and got close to her new family. However, there were also hard times. Years of drought where people went hungry and many children died, including Olive’s sister, Mary Anne. Olive was allowed to bury her according to her own religion. She was given a piece of land where Olive planted a garden of wild flowers.

The invisible tattoo of Olive Oatman

Olive Oatman was almost 20 when a messenger from Fort Yuma arrived at the town of Mojave. They had learned of the presence of a white woman and demanded her return.

However, it must be said that the young girl was never held captive by the Mojave. They always told her she was free to leave whenever she wished. But Olive never had any special interest in returning to what the white man called civilization. Her life was good. She was happy.

Still, she changed her mind when she found out that the one asking for her return was Laurence. Laurence was her little brother, who she had believed was killed in the brutal attack by the Yavapai. She decided to leave the Mojave to go back with her brother. It was a hard decision, and one she would regret years later.

The woman with the blue tattoo

And so she became the “woman with the blue tattoo.” The Victorian dress they immediately tried to cover her with couldn’t hide the tattoo on her chin. However, what not everyone knew was that her arms and legs also had striking tattoos. But they never saw the light of the Colorado sun again.

After her return to civilization, everything moved very fast for Olive Oatman. A book was written about her story. She was offered part of the royalties, which she took advantage of. The money helped her study at a university and pay for her brother’s training. Later, she began lecturing throughout the United States, talking about her experience with the Yavapai and Mojave.

What the book contained and what people expected to hear in her lectures were anecdotes about the savagery of the Indians, their ignorance and inhumanity. Under pressure, Olive had to lie to survive in the town that had welcomed her into her new life.

In 1865 she married a rich rancher. He only asked of her one thing: to forget her past. To leave the lectures behind and put on a veil to cover the tattoo. She did so, letting time go by like that, drop by drop. Year after year.

Submitting to what was perhaps the worst bondage of her life. She ended up with a new tattoo: the pain and the memory of those years with the Mojave. When she was free and happy…

Olive Oatman spent much of her life with bad headaches and depression, and she even spent time in Canadian clinics. They tried to cure her of her longing for her other family, the Mojave. She died at 65.

Today, I invite you to read 33 of the best positive thoughts that can be found in our collective human…

Culture
50 Little Ways to Be Brave

When you were a kid, surely you identified with some superhero or character who fought against the bad guys using a cape, sword or a special power. Or maybe you thought…

Literature and Psychology
Flowers in the Desert: A Lesson in Recognizing Love