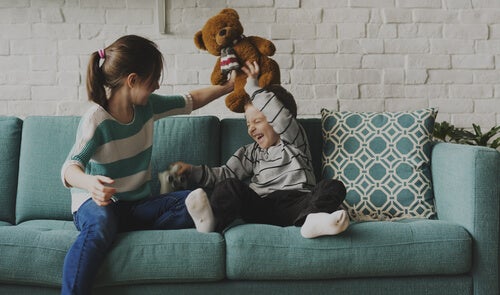 Changes in family dynamics are a big deal. Schedules, meals, fun. And what about how parents change their focus and distribute chores and responsibilities? Those who have been older siblings will know what we’re talking about here. It’s important to think about all of this from the perspective of a child somewhere between eight and ten years old.

It’s in that time from eight to ten years old when children become aware that you can feel two emotions at once. Feeling angry because someone just came and displaced them, but joy too because the same event has some positives.

Their emotional ambivalence should be respected by the adults in their lives. The secret is to explain these contradictory feelings and make them know that you understand them.

Between fun and role model

For parents, the challenge seems to lie in raising another member of the family. However, there’s another challenge: readjusting the expectations and responsibilities of the firstborn.

It’s a tricky balance that often makes the older sibling’s life harder. The feeling of not being an only child can lead them down two different paths — indifference or hyperresponsibility — each with equally ominous consequences.

For example, older siblings might over-immerse themselves in caring for their little sibling. They may even start to play the role of father or mother in their absence, possibly competing with the parents when they’re there.

But it could turn into too much pressure and and make them feel like they can’t make mistakes. Older siblings should adjust to their new role and be given responsibility in line with their age. It’s the parent’s job to be fair.

The bond between siblings

“How did their sibling take it?” we ask when a new baby joins the family. Older siblings may throw tantrums, be nervous, jealous, angry… Routines and customs that are so important for structure and the emotional and academic development of children take a sharp turn and must be rebuilt.

“As we grew up, my brothers acted like they didn’t care, but I always knew they looked out for me and were there!”.
– Catherine Pulsifer –

All of the responsibility of being an older sibling also has a positive side: fun, fulfillment, happiness. There is nothing like being a partner in crime. It’s an indescribable bond. Sharing secrets, venting to one another, experiencing new things together… it’s all a part of what it means to have a little sibling.

Sowing the seeds of trust and affection is important. A brotherly or sisterly feeling will grow out of it, going further than just blood ties. And the relationship might undergo transformations throughout the years. As they grow, their bond will change.

The important thing is that little by little the age difference gets less important, siblings become friends too.

“To the outside world we all grow old. But not to brothers and sisters. We know each other as we always were. We know each other’s hearts. We share private family jokes. We remember family feuds and secrets, family griefs and joys. We live outside the touch of time”.
-Clara Ortega-

7 Things That Happen When You’re An Older Sibling
Having a younger sibling is something that only older brothers and sisters can understand. It is one of the best relationships that we can experience within our family. Read more »
Link copied!
Interesting Articles
Wellness
Eduardo Galeano in 20 Memorable Quotes

Eduardo Galeano was an exceptional man, and one who, without a doubt, did not leave anyone feeling indifferent. The Uruguayan writer, author…

Wellness
No One Heals Himself by Hurting Others

Sometimes, our way of expressing our thoughts and our behaviors leave a lot to be desired. We are brusque, rude…

Sometimes quitting is not an act of cowardice, but an act of bravery. Quitting doesn't imply a lack of courage, but the complete opposite:…

Certain friends in our lives help keep us from falling during our most complicated moments. Friends that offer us their time and affection…