Neighbor Harassment Can Do Serious Damage

Neighbor harassment can have serious psychological impacts on its victims. Read all about it here! 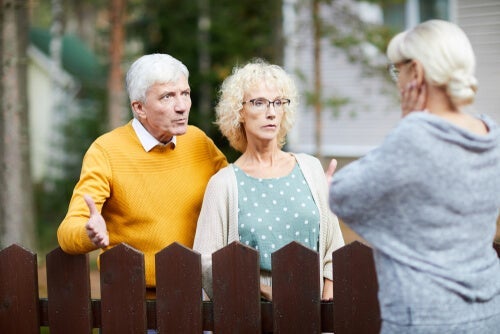 The concept of “harassment” is relatively common in our daily lives. For example, we all know that many kids in school suffer from bullying at some point. It can even happen within the home. Then there’s the concept of “mobbing“, when a group of people gangs up on you in any environment. But what about neighbor harassment?

What we were trying to get at is that hostility, aggressiveness, and even violence are sadly common in this world. Neighborhoods and apartment buildings aren’t always free from this, either, as much as we like to get along with our neighbors.

In this case, neighbor harassment basically means one or more neighbors harassing another, in a sustained, frequent way. It goes beyond simple arguments over living conditions and, if anything, it looks more like bullying.

This is a big reason why victims of it tend to experience psychological consequences similar to victims of bullying and abuse. Among the many symptoms are things such as low self-esteem, constant fear and anxiety, desperation, depression, and even suicidal thoughts.

In fact, this can be such a serious issue that there are actually laws about it and, in some cases, it’s truly a criminal offense you can take someone to court over.

Some stages of neighbor harassment

Neighbor harassment can take several forms and has multiple stages. It’s best not to wait for all of them to show up before you take action. You should report it as soon as the harassment begins.

What can you do about it on a psychological level?

It’s really important to start doing some psychological work here, whether for the victim, the harasser, or both. Another really good thing to do is to train in clear communication and assertiveness.

Ideally, that work would start as the harassment is just beginning, during the early stages of the conflict. The issue here is still the conflict itself, and it’s a good time to learn how to communicate well from a place of respect and empathy.

Back to the earlier example, if someone has a dog that barks all day and a neighbor complains, they both need to be able to find a middle ground where they can reach an understanding.

The neighbor with the dog should start by apologizing and saying that they’ll try to keep it from happening, or learn how to keep it from barking (trainers, not leaving it alone, giving it toys to entertain itself with, etc.).

As for the neighbor who complained, who will probably end up being the harasser if the problem isn’t solved, needs to be more flexible and understand that some people have pets and can’t just abandon them because their barking bothers the neighbor. So as long as it’s not ridiculously loud, it should be bearable.

What if you can’t reach an understanding?

If they can reach an understanding, where one person tries to be flexible and tolerant, and the other tries to find a solution, then it’ll probably never get to the point of harassment. But if either person starts to get defensive, the stages will probably progress and the whole thing will be way worse than it started off.

Once the harassment has begun, the victim absolutely needs to turn to a therapist who can help them with their confidence and self-esteem. They’ll probably recommend things such as using extinction for the neighbor’s behavior, not getting into arguments, and not reacting to insults or humiliation.

But that goes only if the harassment is verbal. If there starts to be any kind of physical aggression, you need to report it right away. Extinction, if it works, can lead the harasser to simply get tired of doing it.

If none of that works, and the harassment has been going on a long time, it might really be time to consider moving. We don’t say that lightly–this should be your last resort. If you move, it’s important not to fall into the same situation, and the best way to start is by introducing yourself to all your neighbors.

You can casually mention having a dog, playing piano in the afternoons, having a baby that cries at night, or whatever your situation is so that your new neighbors know what to expect.

What is Mobbing or Workplace Harassment?
The concept of mobbing or workplace harassment (psychological harassment or bullying in the workplace) has an essential ethical substrate that refers to... Read more »
Link copied!
Interesting Articles
Conflicts
Keys to Managing Passive-Aggressive Behavior

Conflicts
How to Speak Out Against Bullying