The Myth of Plato's Cave: The Duality of Reality 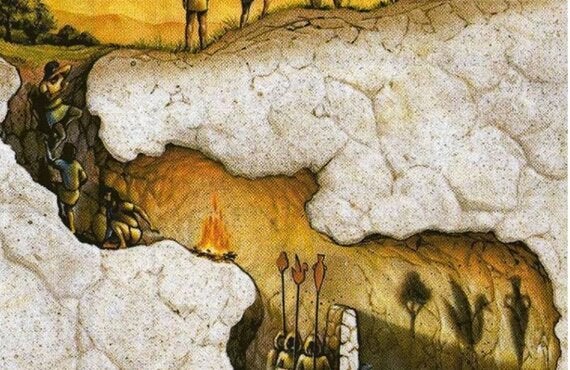 The myth of Plato’s cave allowed us to understand the way in which this philosopher perceived the world. A relationship between physical things and the world of ideas, which gives way to a reality full of lights and shadows. On one hand, we have reality just as it is. On the other, we can find a fictional reality where our beliefs and illusions take on a main role. But, before we delve into this even further, what exactly is the myth of Plato’s cave?

In this tale, there are men who have been chained in a cave throughout their entire lives. The only thing they can see is a the cave’s wall. They have never been able to exit the cave. They also have never been able to turn around and see the origin of the chains which bind them. However, behind them there is a wall and a little farther still there is a bonfire. Between the wall and the bonfire there are men who carry objects. Thanks to the bonfire, the shadows of the objects are projected onto the wall. Thus, the chained men can view them.

I could see images that were lies and false realities. But, how could I consider it as such? If, from the time I was a young boy, it was the only thing I had seen that was real.

The men had only seen the same images since they were born. Hence, they didn’t have the need nor feel curiosity to turn around and prove what was being reflected. But this was a deceitful reality, it was artificial. These shadows distracted them from the truth. However, one of them, dared to turn around and see beyond these images.

At first he felt confused and everything bothered him, especially that light he could see in the back (the bonfire). Then he started to feel distrust. Had he believed that the shadows were the only things that existed in this world when this wasn’t true? Each time he moved forward, his doubts tempted him with the possibility of going back to the shadows.

Nevertheless, with patience and effort, he continued forward. Little by little, he became accustomed to what now seemed so unknown. But, when he ran back to tell his partners, they received his news with mockery. Contempt that reflected the disbelief these cave inhabitants felt about what the adventurer was telling them.

Applying the myth to real life

It’s funny how this vision offered to us by the myth of the cave can translate over into reality. Keep in mind that we have accepted many absolute truths as our own without stopping to question them, without questioning whether the world is actually very similar or very far from this “truth”.

For example, thinking that a mistake is a failure can influence whether we abandon a project at the first setback. However, if we don’t let ourselves be influenced by this idea, we can cultivate our curiosity and the mistake will stop being a demon completely charged with negativity. Thus, this change in perspective will manage to make us stop fearing it. Plus, it will also make us be willing to learn from it when it happens.

Leaving the cave is a difficult process

The man in the myth who decides to break free of the chains which imprison him makes a very difficult decision. Far from being appreciated by his partners, this decision is seen by them as an act of rebellion. When he makes up his mind, he sets out on a lonely journey, overcoming that wall, climbing towards the bonfire, which causes him so much distrust and awe. Doubts plague him. He no longer knows what’s real and what isn’t.

He has to break away from beliefs that have accompanied him his entire life. Ideas which make up the foundation of the rest of his beliefs. But, as he moves forward towards the exit of the cave, he starts realizing that what he believed wasn’t all that true. Now…what can he do? He must convince those who mocked him that liberty is a reality they can aspire to if they decide to break away from the apparent commodity they live in.

Ignorance is no longer an acceptable reality

The myth of the cave presents ignorance to us as a reality which becomes uncomfortable when we start becoming aware of its presence. Faced with the slightest possibility that there might be another possible version of the world, the story tells us that our inertia pushes us to break it down because we now consider it a threat to the established order.

The shadows are no longer being projected, the light has stopped being artificial and the air now caresses my face.

Maybe, due to our human condition, we can’t put aside that shadow world. But, what we can do is make an effort to make those shadows become more and more clear and acute. Maybe the perfect and iconic world of ideas is a utopia for our human nature. However, that doesn’t mean that renouncing our curiosity is better than surrendering to the commodity of settling for what we already know (or think we know).

As we grow, doubts, incoherences, and questions help us take the blindfold off our eyes which, at times, made our lives much harder than they really are.

You Create Your Own Reality
Do you know what is real, what is truth, and what is a lie in this world of experiences? Read more »
Link copied!
Interesting Articles
Experiments
Harlow's Experiments on Attachment Theory