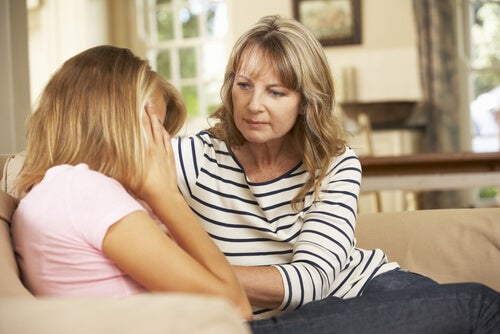 Being a mother is one of the most beautiful things in life. It sounds cliche, but it’s true. The process of creating life and giving birth is more than just biological. Feeling that warmth and that protective, loving instinct is hard to avoid.

It’s like embarking down an unknown road. We know we won’t just come across beauty, but also uncertainty, huge changes in routine, pressure to make the “right” decision. And then depending on when we were born, we may get conflicting parenting advice.

“The heart of the mother is the only capital of feeling that never breaks down, and with which you can always and at all times count on with all security”.
-Paolo Mantegazza-

In today’s world, mothers have to deal with a mess of outside opinions about what a mother should be like. Practically every week we run across articles and books about how to parent. How strict we should be, whether to breastfeed or not, if it’s ok to sleep in the same room… And these debates just scratch the surface.

There is only one mother, but many different kinds

And these are just a few examples. Although we could catalog and label the types of relationships mothers have, the fact is that there are as many mothers as there are women with children. Plus, people change. Mothers may go through times of doubt or go from controllers to perfectionists as their children grow up.

“There’s no way to be a perfect mother and a million ways to be a good one”.
-Jill Churchill-

So many mothers want to be friends with their daughters. The function of a friend is to listen, entertain, support, be an accomplice, punish, advise or accompany. Granted, all of this at first glance sounds like something a mother would do.

However, there’s a difference. A mother figure must be an example, a role model and a guide. She is who her children primarily develop an attachment to. The relationship between parents and children comes from love, protection and support in the early stages of life — when we’re the most vulnerable.

Mother or friend? Why your children needs a mother first

Normally, mothers start desiring to be friends with their children once they become teens. Adolescence is when our children start becoming more independent and looking for their place in the world.

Afraid of losing control, or wanting to show they trust their kids, many mothers start acting like their friends. It’s true, there comes a time when children have to make their own mistakes. We can’t always control them.

“My mother was very imaginative and with a certain vision of the world. She was not a very high-class person, but she was incurably romantic and it got me started on travel novels. (…) My mother read bad literature, it was not cultured, but her imagination opened other doors for me. We had a game: ‘Look at the sky and look for the shape of the clouds and invent great stories.’ This happened in Banfield. My friends did not have that luck. They did not have mothers who looked at the clouds.”
-Julio Cortázar-

Children need to have secrets, they need to argue, they need to hear “no.” They must be told what to do and have limits set for them. So when we wonder if we should be their mother or friend, we have to remember that a friend doesn’t do that. That’s why we choose our friends and are able to leave them when we want. A crucial part of friendship is disinterested affection.

But a mother does have interest, a personal, pure interest in instilling values, teaching and guiding her children. At the same time, she has to give her kids space when they need it. Knowing how to leave the door open so they know they can count on you and you’ll be there for them if they fail, instead of breaking the door down and interrogating them. No one said it was easy! Hence the beautiful challenge of raising children.

3 Behavioral Techniques for Parenting: Reinforcement, Punishment, and Extinction
When it comes to parenting, sometimes we don't really know how to stop inappropriate behavior. But behavioral techniques can help us to control these and other behaviors. Read more »
Link copied!
Interesting Articles
Psychology
Destiny Is the Wisdom of Knowing How to Choose