Most Frequent Linguistic Errors in Children Aged 3 to 6 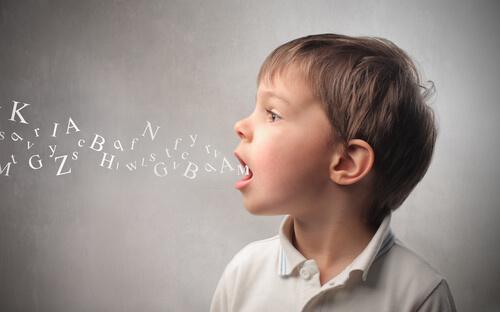 When children begin to talk, they make a series of linguistic errors. These are a result of their learning process. Sometimes you become alarmed when you hear your child saying three-word sentences or barely talking. However, this is not necessarily a problem. It’s important to know when to worry. You should also know when to see those errors as part of a phase in your child’s development.

You should also keep in mind that some of these linguistic errors are frequently made by adults too. These are the famous “slips of the tongue”. They are involuntary errors that you make when you want to say a word. Instead, you may pronounce an unintended word or interchange ideas involuntarily.

This is due to the fact that your thoughts sometimes don’t appear in a grammatically correct form in your mind. As such, you have to go through a selection process to find the most appropriate word. Let’s take a look at the most common linguistic errors in children between 3 and 6 years old in terms of category.

“We think through words. These thoughts come to our mind in a grammatical form of subject, verb, objects, and compliments without us knowing how we produced the sentence.”

“Learning implies making mistakes and learning from them.”

When children begin to use a new word, they don’t know its true meaning. Little by little, they start to learn and reduce the semantic difference thanks to their errors (attempt-error) and environment. That is to say, they begin to refine the meaning of the concepts. Even so, in this learning process, two types of linguistic errors may be produced:

Phonological errors are linguistic errors produced in the phonemes. Phonemes are the smallest units of language. Sometimes, these faults affect the whole word. Otherwise, they can affect syllables of a word or just some phonemes. Children with these problems sometimes don’t produce unstressed syllables. They may “swallow” some letters or not pronounce final consonants in words.

These may be of various types:

There are children who pronounce a very limited number of phonemes but so do very well. More intrepid children choose to try to pronounce words outside of the limit of their abilities. In general, every child has his own preferences for pronunciation.

“We learn language through innumerable experiments”.

Morphology and syntax are two basic components of language. Children, in the development of the morphosyntactic component, tend to use certain acquisition mechanisms.

Children are like parrots! They repeat everything they hear, even what they shouldn’t. That is why, when their parents use catchphrases, sayings, or linguistic formulas, they try to copy them. But they remember them in bunches as a whole. They don’t remember them word-for-word.

Because of that, when they try to imitate and reproduce them out loud, they can only use them in the context in which they learned them. They are not even aware of how they had been constructed. For example, if a child hears his mother say “how handsome you look today!” to her husband, the child will repeat that phrase in that context. They do not generalize the formula.

At the same time, when they are learning three-year olds don’t know how the language system is structured. They don’t know the rules of grammar. They don’t know that words are constructed on the basis of some criteria. Because of that, they learn syntactic forms independently of each other.

As time goes on, they come to realize that there are rules and they have to submit to them. At that point, they take them to extremes. This is known as hyper-regulation. Examples of this are “I broked” > “I broke” and “I knowed” > “I knew”

When to worry about linguistic errors

There are certain type of linguistic behaviors that can be inadequate for the developmental age of the child. These can indicate some sort of delay in the acquisition and development of language. Some of these are:

Nevertheless, the child’s linguistic errors are not symptoms of a delay in development or in their linguistic abilities. The opposite is true. These are signs that the child is progressing and beginning to learn the system of the language (Borregón, 2008).

Culture
The Effects of Benzodiazepines

Culture
Being an Authentic Person: When What I See in the Mirror is My True Self

We're used to living in a world of fake images, futile attempts to be someone we're not, and intense pressure…