There's more information at your disposal these days. You can find answers to any question with just a click. Unfortunately, there's a lot of junk in the mix that makes you less intelligent and more vulnerable to manipulation in many cases. This is mainly due to the controversy that surrounds it. 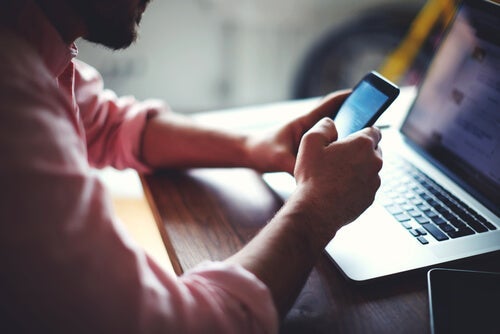 Access to more information is one of the greatest transformations that the technological revolution brought about. This is because it introduced the concept of an “information society“. The unfortunate thing about this phenomenon is that a large part of society didn’t enrich by such technological advances. Quite the contrary, in fact, humans are seriously displaying mental process deterioration.

Being a part of the information and knowledge era isn’t just about knowing how to operate a computer or a smartphone. When there’s no intelligence behind the handling of such devices, then the devices end up directing a person’s intelligence. Unfortunately, this is just what’s happened to many people.

The most serious thing of all is that there’s a lot of information available and many people truly believe they’re better informed. They think they really know about various subjects just because they can read a little bit of it on the Internet and parrot what they find. Unfortunately for the world, not many people care about truthfulness.

“True genius resides in the capacity for evaluation of uncertain, hazardous, and conflicting information.”

The Internet isn’t only a network full of information and communication, but a massive culture. Thus, it’s full of irrelevant information constantly bombarded to users. The volume of data is so high that discriminating it seems nearly impossible. Thus, you take it as it comes.

Virtually, you can back up anything outrageous with information from the Internet. If you’re trying to prove that “the devil exists”, there’ll be at least 15,000 entries that “support” it. There’s an investigation, testimony, or evidence, for almost everything even though a lot of it lacks validity.

For all of the Internet’s glory, what’s happened is that it’s progressively become a space of distraction, rather than information. Thus, information no longer has the truth filter that existed before. Yes, there’s more information now but the worrying thing is that much of it is fake and designed to distract you.

Good information is data that constitutes the foundation from which you can truly build real knowledge. However, when there’s more low-quality information, this process either truncates or people misrepresent it. Thus, fake data leads to fake knowledge and, for obvious reasons, a fake conscience. This is precisely what’s been happening with large segments of society.

It’s for this reason that wisdom is increasingly scarce in today’s world. This is because it needs awareness and ethics as a foundation built on relevant knowledge and information. Wisdom isn’t present where there’s more information but when you filter the good from the bad. Good information leads to deeper knowledge and allows you to understand the essence of things.

What’s out there today is a superficial approach to the different realities. For instance, the mind goes over it quickly and neither analyses or criticizes it. People multitask and forget what they learn so they let others analyze information for them. Thus, telling you what your values and priorities are.

As per all of the above, one can say there’s more information out there today. Somehow, it’s creating less intelligent humans. This is largely due to the attitude that feeds the virtual world. For instance, patience is now an exotic virtue and people seldom reflect and elucidate because it takes too much of the time they spend looking at cute cat pictures. Thus, rushed learning can’t lead to wisdom.

Wise people focus their eyes on the riddles and don’t seek answers in Wikipedia. They enjoy observing, analyzing, and reflecting. Most people don’t want to enter the labyrinths of the great mysteries and formulate great questions. They mainly want to find the recipe, the applicable formula, the numbered list, and the timely data.

Raising awareness is no longer important to many. This is because most people are too busy all the time, even when they sleep. Finally, people no longer think they need to think, only say and act. Even when what they say or do hasn’t the slightest importance and is only a way to waste their time. In other words, to spend their lives.

Noam Chomsky on Fake News and Post-Truth
Post-truth have always been around, but now they've come in full force again with fake news. Chomsky advices that not all that's viral is good. Read more »