Mark Twain: Biography of the "Father" of American Literature

Mark Twain illustrated with genius and truth the social differences that characterized the United States toward the end of the 19th century. 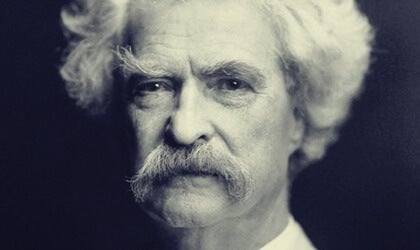 William Faulkner was the one to first call Mark Twain the “father” of American literature. In his own time, however, newspapers considered Samuel Langhorne Clemens a philosopher. They considered him an intellectual with pretensions of adventure and a genius and sharp writer. Mark Twain was capable of putting forth unforgettable characters such as Tom Sawyer and his best friend, Huckleberry Finn.

While the United Kingdom had Dickens, Twain was the one to illuminate literature and journalism in a similar way in the United States. Mark Twain had in his pen the same mastery and literary originality. He was also a great orator and humorist and helped carry American culture to a golden age.

Ernest Hemingway said that American literature began and ended with him. That’s obviously an exaggerated opinion since authors such as Edgar Allan Poe, Nathaniel Hawthorne, and Herman Melville also made great contributions. That being said, there was something that exquisitely differentiated Mark Twain.

Nobody described the social character and inequality of that time period in the United States better than him. His language wasn’t refined and didn’t emanate the essence of east coast writers. Twain was an adventurer from Missouri and his personality gave off the purity and simplicity of humble people from the south. He was from a place of guile, slavery, need, and necessary genius.

“A man cannot be comfortable without his own approval.”

Samuel, an adventurer of the Mississippi

Samuel Langhorne Clemens was born on November 30, 1835, in Missouri. He used his pseudonym, Mark Twain, from 1862 on to write his books after several years working as a steamboat pilot. His childhood, along with all the complex life experiences of his youth, would show up in his characters. They were alert, adventurous, and notably critical.

One of the most notable anecdotes from his life is the fact that he was born just as Halley’s Comet was approaching Earth. That being said, the thing that most determined his first years was his family’s economic needs. He couldn’t finish school and had to work. He first worked in a print shop and then as a steamboat pilot.

After the outbreak of the Civil War (1861-1865), Samuel left his job and decided to go to Nevada looking for gold. His brother was secretary to the governor there. Thus, he got to know the place.

He tried getting rich (unsuccessfully), he spent time with Mormons, and he worked as a journalist with Territorial Enterprise. Later, he set out on new journeys. This time, he went all the way to Europe and the East.

The birth of Mark Twain

Samuel Langhorne Clemens became Mark Twain through the publication of a short story: “The Celebrated Jumping Frog of Calaveras County”. This story was so successful that it marked a before and after in his life. After that first literary success, he wrote:

All of these titles are simply examples of his great creative capacity and originality. Mark Twain was a figure who truly carved out a space for himself in the American culture of the era. By then, he had already married Olivia Langdon. Sadly, they lost their first daughter, Susy, from diphtheria at the age of two.

That loss provoked a special feeling in him to the world of childhood. In 1876, he wrote one of his most famous books: The Adventures of Tom Sawyer. He followed it with Adventures of Huckleberry Finn. These are two literary treasures that contain much more than the adventures of children during the days before the Civil War.

Mark Twain dissected in great detail (in his classic sharp and humorous way) the essence of the United States during a time of racism, hunger, marked social differences, and human cruelty. He set the stories in places that were very familiar to Samuel: on the banks of the Mississippi with the most diverse, ingenious creatures.

Mark Twain was one of the people of his era who was most committed to human rights. He was a firm supporter of abolition and defended the necessity of justice and respect. This included other ethnicities and the emancipation of women, as well. He made several speeches during that time in favor of votes for women. Hellen Keller, the blind and deaf political activist, was a fan of his and reportedly always cared about his well-being. She even helped him financially.

Mark Twain never abandoned the adventurous and carefree character of the old Samuel L. Clemens. This actually made things financially difficult toward the end of his life; he was a bad investor and barely made ends meet by giving conferences.

His last years were marked by sorrow. He lost his wife and his children. Saying goodbye to those he loved took some of the exuberance from his books. Even so, the University of Oxford awarded him an honorary doctorate for his talent. Many years have passed, but the world still admires and continues to enjoy his legendary literary talent.

Zelda Fitzgerald: Biography of a Broken Muse
Zelda Fitzgerald is known as the imbalanced or "crazy" wife of the writer F. Scott Fitzgerald. She was also one of the first flappers in the United States. Read more »
Link copied!
Interesting Articles
Biographies
Carl Jung: Biography of the Analytical Psychology Pioneer