Marasmus: The Importance of Affection in Early Childhood

Can lack of affection in childhood cause serious psychological consequences? Yes, it can. Continue reading to learn more! 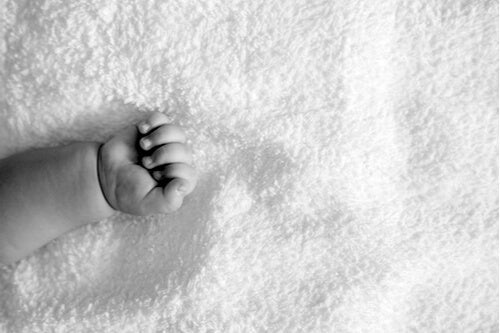 Affection and attachment bonds are necessary for the proper development of any baby. For this reason, the separation of attachment figures (depending on time and duration) can be quite devastating.

René Spitz studied psychological disturbances in institutionalized or hospitalized children who were separated from their mothers. He found that, in severe cases, death could result from marasmus.

Now, the ties a child establishes with their family and environment during their early years conditions the way they relate to the world and others.

John Bowlby analyzed the formation of this mother-baby bond. Likewise, Mary Ainsworth described the different attachment patterns. In this article, we’ll be reviewing their pieces of work, as well as Spitz’s discoveries.

Attachment is a strong affective bond established between the child and the attachment figure (usually the mother). This, as a consequence, drives them to stay together. This is especially important when looking to promote exploration of the environment and facilitate learning, as well as to promote proper physical and mental development.

John Bowlby studied the formation of the attachment bond and the stages of its development. It isn’t until stage 3, from 7 months, when the attachment itself is formed. This is when separation anxiety and anguish before strangers begin to appear. In the previous two stages, the child may have a preference for one caregiver or the other. However, they don’t protest the separation.

Moreover, Mary Ainsworth designed a laboratory situation that she called the strange situation. This allowed her to study the gaps between children and their attachment figures in a controlled way. She observed the children’s behavior in the face of separation and reunion. As a result, she was able to describe three attachment patterns:

These attachment patterns are considered to be universal and appear in different cultures. Subsequently, she identified a fourth type of attachment, which is the disorganized/disoriented attachment (Group D).

Separating a child from their attachment figures before 6 months doesn’t seem to cause many difficulties. The reason for this is that the attachment isn’t complete just yet. However, between the ages of 6 months and 2 years, children are especially vulnerable to separation anxiety.

Bowlby studied the effects of short-term separation and the evolution of anxiety-depressive symptoms. Consequently, he described three phases:

A child who fails to adapt to the loss may have to face serious consequences. For example, intellectual retardation, socialization problems, and even mortality.

In fact, Spitz studied that early separation from the mother could cause different psychogenic diseases.

He based his studies on direct observation of institutionalized children or children hospitalized for long periods of time. Additionally, he made a comparison between the development of two different children; those raised in institutions and those raised in women’s prisons with their mothers.

Now, partial emotional deprivation (between the 3rd and 5th month) is the cause for anaclitic depression. The symptoms may disappear a few months after resuming the affective relationship, whether it’s with the mother, with another attachment figure, or when they’re adopted and form new bonds.

Actually, many people know this as hospitalism syndrome. This is because it was observed in children who’d been abandoned at the doors of any institution that could take care of them (hospital, orphanage, or convent, among others).

The term hospitalism describes the profound physical and psychological disturbances in children abandoned or who’ve been hospitalized for a long period of time.

In this environment and under these conditions, the depressive symptoms are often chronic. As a result, there’s a high chance that cognitive and social problems will develop. Among the most important alterations described by Spitz, we have:

In the event that the affective deprivation is total, the picture can evolve until producing marasmus. Believe it or not, this may cause a child’s death. In fact, children with marasmus are extremely thin and have nutritional and emotional deficits.

Why can marasmus cause death?

Marasmus has a medical meaning; a type of extreme malnutrition that occurs before 18 months of age because the mother stops feeding the baby. Now, the nutritional deficit is so severe that it can lead to death if not treated in time and if there are other associated complications.

However, researchers observed that nutritional deficit wasn’t the only cause. In fact, they discovered that the total absence of affection in babies could also cause marasmus. More often than not, institutionalized children never had an opportunity to form a bond.

Interruption of crying, blank stares, lack of reactivity to the environment, long periods of sleep, and total loss of appetite are actions that follow crying, agitation, hopelessness, and other developmental delays. It’s as if the child gradually disappears.

Thanks to Spitz’s studies, there was a reform in the conditions of hospitalization and institutionalization of children. His work showed that institutionalized children needed more than just to have their food needs covered. As a matter of fact, he proved that for these children, there were other equally important needs that could hinder their development if neglected.

Harlow’s Experiments on Attachment Theory
Children who have been separated from their parents seek attachment in their future relationships. Attachment theory explains this. Read more »
Link copied!
Interesting Articles
Clinical Psychology
Types of Speech Disorders and Their Characteristics

Having negative thoughts during the COVID-19 crisis is completely normal. It's important to know that, at this time, most people…