Madame de Staël was one of the most important intellectuals of the French Revolution. She was a woman who ignored the conventions of being female. In fact, she could've ruled the world. 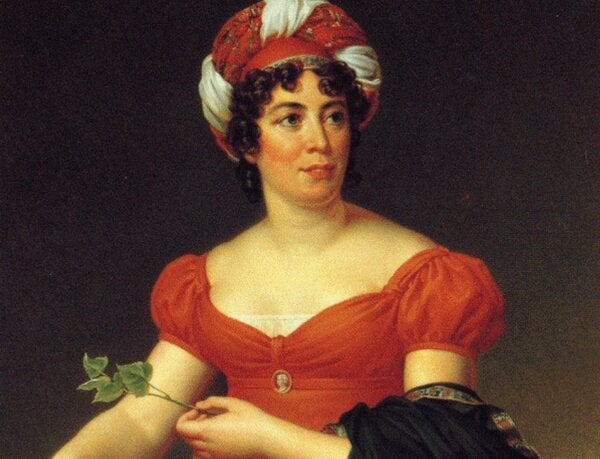 Anne Louise Germaine Necker, better known as Madame de Staël, remains a major figure in the history of modern Europe. She was a pioneer in comparative literature studies and was most certainly a woman ahead of her time. In fact, she was a distinguished woman of letters who was also socially influential.

Anne Louise Germain de Staël was one of the most important voices of the Enlightenment, and not just in literary terms. Indeed, in her writings, she gave very clear and forceful views on the extremely turbulent political and social landscape of the time.

Napoleon Bonaparte wanted to have her by his side and keep her under his control. However, Madame de Staël ended up being one of his greatest enemies. She was inspired by the decisive changes of revolutionary France. Furthermore, she developed and defended her own political and social ideas.

Anne Louise Germaine de Staël was born in Paris in 1766. She was the daughter of Suzanne Cuchord and Jacque Necker. Necker was the finance minister of the French monarch, Louis XVI. Her parents were both Swiss. Furthermore, they were fervent Protestants. In fact, this faith came to play a very important role in Anne Louise’s life. Indeed, she was educated by her mother, which gave her a Calvinist view of the world.

Her mother hosted a salon. These were very popular gatherings of the time, where people would meet to talk about politics and culture. It was at these particular events that Anna Louise, at a very young age, was first able to display her intelligence and skills. She possessed these abilities thanks to her rigorous education, which was a world away from the traditional educational standards of women at the time.

Her marriage was arranged by her parents when she was only 13 years old. However, she didn’t actually get married until several years later. Her parents chose a Swedish diplomat who was 17 years older than she was. Although he never made her happy, they had four children together.

Anne Louise rather brazenly stated that her husband left her to live her life and didn’t interfere in the several affairs she had. However, they eventually separated. Some years later, she ended up working in the business of arranging marriages. She herself married twice more, to husbands of her own choice.

The ideas of Madame de Staël

The gates of the intellectual circles of Paris were now open to Anne Louise. In fact, her political ideas and essays soon became very influential. She opened a salon similar to her mother’s where she could readily exchange her ideas with like-minded people. Indeed, she was passionate about both the Enlightenment and the French Revolution, which she initially supported.

However, when the Reign of Terror arrived, she was disappointed by both the Republicans and the absolutists. She reflected these feelings in her writings. In fact, she withdrew her support for both parties and supported the idea of a constitutional monarchy instead. This resulted in her being exiled.

When she returned to France after her first exile, she wrote one of her most important works. In this work, she denounced the miseries of the female condition. Furthermore, she declared her anti-misogynistic views. She wrote it in defense of her friend, Queen Marie Antoinette, who had just been sentenced to death.

Her relationship with Napoleon Bonaparte

By the time Napoleon appeared on the scene, Madame de Staël was a very influential character in French politics and society. Bonaparte thought she could be an instrument for his own propaganda as well as advising him.

After meeting him a few times, her opinion of Napoleon was pretty dire. She thought he had little intelligence. Furthermore, that he had the personality and vision of an absolutist. Indeed, this was far from the kind of revolutionary spirit she loved so much. Around the same time, Madame de Staël’s lover was Benjamin Constant. He was one of the main opponents of the Napoleonic regime.

Therefore, she was once again exiled. She settled in Coppet, in the Swiss canton of Vaud in the family home. There, despite the revolution, she published two books on political and social issues and discrimination against women.

An intellectual out of her time

Anne Louise lived through a difficult and unstable era. She had a strong personality and was passionate in every aspect of her life. Indeed, they said that she was “the woman most feared by Napoleon”. Furthermore, despite her many disappointments, she remained idealistic and revolutionary.

Anne Louise knew how to rise above the political and social corruption of a Europe of violent transformations. Furthermore, she managed to exert her considerable influence without becoming tainted herself. In fact, like the proverbial lotus flower, she emerged from out of the mud without a mark on her.

Biographies
Louisa May Alcott - Biography of a Non-Conformist