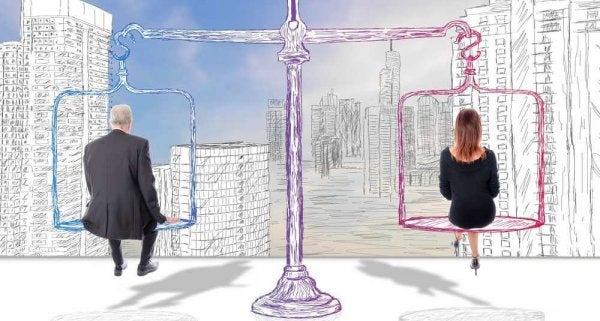 Machismo is an ideology that holds that men are different from women, and that this difference makes them superior to women. Although it may seem a very exaggerated form of thought, it is one of the most common beliefs today. In fact, it is so common that it is part of many institutions and traditions. But machismo can hurt men.

This way of thinking does not stop at thoughts. It is also the source of many macho or sexist behaviors.

People who have internalized this belief, even if they don’t realize it, act differently in front of women or men. They tend to be more protectionist or paternalistic towards women, but leave them out of tasks that involve traits they consider “masculine”. For example, they may not include them in activities that require strength or do not conform to typical or traditional feminine roles.

Machismo creates innumerable disadvantages for women and affects all facets of life. In the labor field, women have fewer opportunities to get jobs that do not fit what the “collective conscious and subconscious” expects of them. They have less opportunities to reach a position of great responsibility. Also, their salaries are often lower than those of men in equal positions. All this doesn’t even include workplace harassment. . .

On a more personal note, women have to meet a large number of “requirements” when it comes to their physical appearance. They should be thin, but not flat or without curves. They have to wear makeup, but not too much. Women should wear stylish clothing that is well matched; daring, but not extravagant. They should also have smooth skin.

On the sexual side, women are asked to be submissive. The classic image of the princess awaiting her prince, or the submissive and applied student who falls in love with the rebellious boy he tries to change. These are the romanticized images that make up the collective imagination. Girls have to wait to be pursued by men and, however much they may wish, they cannot accept their first advances. Otherwise, they may seem “easy”.

Although it may seem contradictory, machismo hurts men as well. this way of thinking and the associated actions tend to have negative consequences for men. These consequences can easily go unnoticed because of their counter-intuitive or masked appearance. We will discuss them below.

In the workplace, although men usually earn more and are more readily hired for some positions, there are also jobs for which they are not considered. Jobs that are typically associated with women (nursing, flight attendant, secretary) are more difficult for men to get, and they can be ridiculed by their peers for having a “woman’s” job. Men also end up doing the jobs that involve more physical strength (mining), which takes a toll on their health. This is a way machismo hurts men.

In the personal field, men also face many demands. Although the standard is not as high as the one demanded of women, men also must worry about their social and public image. Men have to inspire safety – often through a strong body and many hours at the gym. Men should avoid having “dad bods”.

With regard to sex, the role of the man is traditionally to dominate and initiate. They are the prince charming or the rebel without a cause. Men are the ones who have to take the initiative and go after the women they love. Of course, they must defend their lady’s honor and protect them at all times. Furthermore, men should stand out among their peers and be leaders. Another way machismo hurts men.

As has been said, men should be leaders. However, the most “macho” behaviors are often the riskiest. By taking a leadership role they may have to fight, or do things that endanger their well-being to prove that they are in control or are worthy based on the standards machismo sets. Other types of risk behaviors include drug use and gambling. Men experience more peer pressure to do drugs and are required to have more endurance than women. In fact, those that do not have their own derogatory label – “wuss”.

One of the most compelling contexts in which we see the danger of these risk behaviors is war. When a country declares war, the majority of the soldiers who come to the front are men. Military service tends to be unfavorable to men in that they are often asked to do the most dangerous or demanding tasks.

All the situations described give rise to the last and most tragic consequence of machismo, death. Men die, on average, at least six years before women. Machismo hurts men. That which in theory puts men in a privileged situation, kills both men and women. Many risky behaviors that sexism encourages wear on the health of men. They will suffer the consequences as they age, even if they do not realize why.

A Father Who Cares For His Baby Is Not Just “Helping”
A father who attends to the cries of his baby, rocks him, changes his diapers and teaches him his first words, he isn't "helping" the mother. Read more »
Link copied!
Interesting Articles
Psychology
How Do Children Make Moral Judgments?

Psychology
Can We Fall in Love with Anyone?

We fall in love in ways that are completely subconscious and intuitive. It is not necessary for us to do complicated mathematical…

Psychology
Do You Know How Perverse Communication Works?

In order to destabilize an individual, you don't need to create a direct conflict or exert physical violence. The use…