Ludwig van Beethoven had a life mixed with tragedy and glory. His unhappy childhood left a permanent mark on him, and his many disappointments in love gave his compositions a very particular tone. 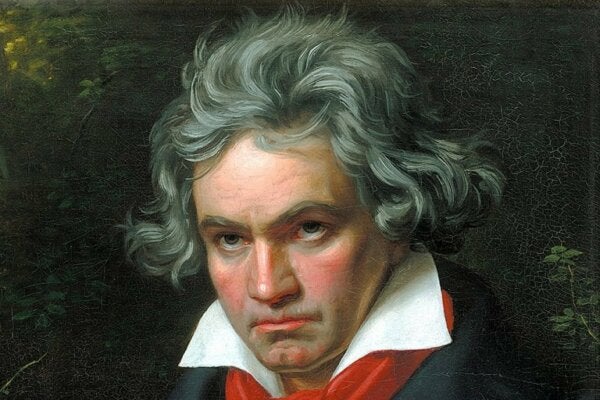 Ludwig van Beethoven was one of those tormented souls who struggled with his creativity and suffering. Although he’s considered the greatest musical genius of all time, he didn’t have a happy life, nor was he able to enjoy his successes to the fullest. From a very young age, he was at odds with the world.

Beethoven’s repertoire was enormous. More than 32 piano sonatas, 17 quartets, eight trios, five piano concertos, and much more. However, what countless generations have truly admired are his symphonies, especially the Fifth, which brought him great fame.

“Music should strike fire from the heart of man, and bring tears from the eyes of a woman.”

Despite the glory he received from his music, Beethoven was never truly wealthy. Nor did he have a rewarding family or love life. Perhaps that’s why his work attained such a depth to it, an evocative combination of somberness and splendor. His music, just like his character, is surprisingly complex.

Ludwig van Beethoven came from a family of musicians. Both his father and grandfather were musicians by profession. His paternal grandparents, Ludwig and Maria Josepha Poll, had a strong influence on him. In fact, his grandfather was practically the only person with who he had a good relationship bond during his childhood, while his grandmother was an alcoholic.

Beethoven had four brothers; he was the second to be born. His mother, Mary Magdalene Kewerich, was sickly and weak in character. His father, Johann, was an alcoholic who spent his time drinking and did little for his family. Grandpa Ludwig, on the other hand, identified the boy’s talent and gave him his first piano lessons.

Ludwig van Beethoven never experienced the warmth of a healthy family home. When the genius was five years old, he began to show his aptitude for music. It’s said that his father wanted to take advantage of this to alleviate his poverty, but he didn’t completely succeed. People also say that, at the age of 12, Beethoven was already a sullen boy who claimed to hate the world.

Beethoven and his impressive creations

In spite of everything, Beethoven still managed to build great friendships. In fact, he always considered friendship to be an important part of his life. The first of these great friendships was with a young man named Wegeler, who took him to live with a family by the name of Breuning.

There, he took piano lessons, met a stable family, and experienced love for the first time. He fell in love with Leonore, who was studying music with him. She, however, rejected him. As a result, this increased his discomfort with the world.

He traveled to Vienna in 1787 and completed his training. At this point in this life, he started becoming quite a musical celebrity. He stayed there permanently from 1792 onwards. It was then that he had his most fruitful period as a composer. However, he also lived many disappointments in his love life.

In 1794, he wanted to marry the singer Magdalena Will, but she labeled him as “ugly and crazy” and rejected him. Later, he met Julieta Guicciadi, who played around with him for a while. It was for her that he composed the famous Moonlight Sonata.

Between 1806 and 1810, he had a tender and passionate relationship with Theresa of Brunswick. In the same period, he composed the Fifth and Sixth Symphonies, as well as the Apassionata. The relationship ended and this was followed by a series of disappointments. In addition to this, two of his brothers went to live with him… at his expense. Because of this, his finances were always in the red.

From the age of 30, Beethoven began to notice the first symptoms of his deafness. For some reason, this embarrassed him more than it worried him. He wasn’t dependent on his hearing to compose, as his talent went far beyond that. Thus, he never forgave Johann Wolfgang von Goethe for making a public comment about his deafness.

Ludwig van Beethoven had no problem with his deafness in terms of his work. He continued to compose as if nothing had happened. However, over time, his social relationships eroded even further. His brothers squandered almost all the money he made. His sisters-in-law hated him. He was asked to be the guardian of one of his nephews and this was a huge burden for him, as the boy was extremely difficult to control.

His health began to weaken. Overcome by his financial situation, he decided to ask his friends and acquaintances for help. The Royal Philharmonic Society gave him £100 (120$) in advance for a concert to be held for his benefit. He cried when he received that help and promised to perform the Tenth Symphony in gratitude for their gesture. However, he was never able to fulfill that promise, as he died unexpectedly in 1824, at the age of 56.

Richard Wagner: The Life of a Tormented Musician
In this article, we're going to tell you about Richard Wagner, one of the most famous and important composers of all time. Learn more about his life here! Read more »
Link copied!
Interesting Articles
Biographies
Fernando Pessoa, a Most Prolific Writer