Louisa May Alcott - Biography of a Non-Conformist

Louisa May Alcott wasn't only the author of one of the most famous youth literature works. She also stood out as an independent woman, the daughter of a man who was ahead of his time, and who passed on to her a love of art and knowledge. 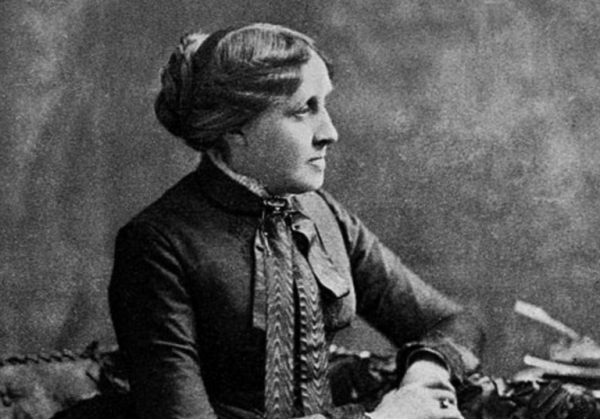 Louisa May Alcott was the author of the famous novel Little Women, a literary work that left its mark on a whole era and that still arouses interest today. The book has been translated into more than 50 languages and its success can be measured by its countless film adaptations.

Little Women became a benchmark in literature. Not only because it’s beautifully written but also due to the realism of its content.

When this book was published, the feminine presence in literature was quite overshadowed by male writers. Moreover, Little Women moved away from romanticism and immersed itself in realism, in real women’s daily lives. That’s why Louisa May Alcott’s novel was an immediate success; it was unlike anything that was circulating at that time.

“Persuasive influences are much better than any amount of moralizing.”

In addition to this, Alcott’s book reflects well-founded ideas and values. She writes about women who are thinkers and build their own destiny. This was something completely revolutionary for the time. The author’s abolitionist and radically democratic ideas can also be seen in the background.

Louisa May Alcott and a special family

Louisa May Alcott was born on November 29th, 1832, in Germantown, Pennsylvania. She was the second of four sisters, all of them women, since her only brother died at a very young age.

It wasn’t a surprise that she became an enlightened and independent woman, as her father was a famous teacher well ahead of his time. His name was Amos Bronson Alcott, a teacher, writer, and transcendentalist philosopher. Her mother, Abigail, was a determined and inquisitive woman. Therefore, as you can see, Louisa grew up in a very stimulating intellectual and artistic environment.

Her own father devoted himself fully to his daughter’s education in their own home. He was a man who considered education a liberating process, whose function was mainly to teach people how to think. This perspective was very revolutionary for a time when the emphasis was on instruction based on memory and discipline.

Louisa’s father belonged to the transcendentalist movement, a philosophy strongly imbued with religion. One of its most fundamental areas was to reflect on the deepest aspects of humankind. He stood out as a pedagogue, especially due to a school that he founded, and he was inspired by progressive pedagogy.

In his school, there were microscopes, rulers, and other items, whose goal was to offer an education based on evidence instead of memory. However, due to his radical decision (at the time) to accept African-American students, his school was shut down.

Amos Alcott also strongly believed in women’s equality and was convinced that women should be given the right to vote. Therefore, he encouraged his young daughter to dedicate herself to what would become her great passion: writing.

He also made decisions that probably influenced the imagination of the future writer. He created a utopian community at Harvard, which he called Fruitland. It was a group of people that lived in a remote place and ate only vegetable products out of respect for animals.

However, they were hit by poverty, and the experiment didn’t last long. Thus, they were forced to seek new horizons.

Louisa May Alcott held different jobs, such as a governess, seamstress, and nurse, during the Civil War. She also began writing and publishing in women’s magazines in her youth.

Her goal was to help with the household finances, although her father always insisted that she do what she loved rather than think about money.

She wrote her novel Little Women reluctantly. By that time, she had already written several novels, almost all of them thrillers. That was the genre she was really passionate about. However, publisher Thomas Nile spoke to her about his interest in a novel aimed at the young women of the time. Thus, Louisa set out to write it, albeit unwillingly.

The book was a success from the start. She wrote it in just two months, and, in the first two weeks after its publication, it sold more than 2,000 copies. From then on, sales continued to grow right to the present day. Louisa May Alcott became a famous and wealthy woman and was able to lift her family out of poverty.

The writer never married. When her mother died, she became the head of the family until her death on March 6, 1888. People say that Little Women was, above all, an autobiographical work. It went down in history as one of those novels that are able to capture the truly essential and, for that very reason, it has never gone out of fashion.