Labeling a Child as Lazy is Dangerous

Labeling means simplifying. Labeling a child reduces them to a word. This can be both harmful and dangerous. This article explains why. 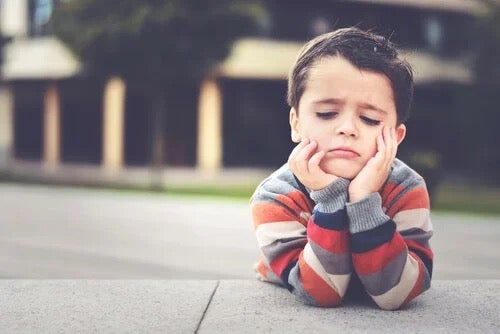 We often ignore the dangers of labeling a child. Indeed, how many times have we said things like, “He’s such a troublemaker”, “She’s lazy”, “My son is shy”, or “He’s so hyper, he just never stops”.

Labeling usually occurs when parents see certain unwanted behaviors in their children. This leads them to speak without really thinking, not realizing what dangers they might cause. As a matter of fact, saddling a child with a specific label often means they start to comply with them.

If a child starts to be disruptive, they aren’t intrinsically “bad”, they’re just behaving badly. If a child doesn’t pass math, it doesn’t mean they’re “lazy”. Maybe they’re a late developer. Alternatively, perhaps the learning method being used isn’t suitable for them. In fact, we could mention numerous other examples. However, this article centers on the more specific instances of when children are labeled lazy.

Labeling a child can cause the Pygmalion effect

The way you relate to the world and the way your attachment figures view you, particularly at an early age, greatly influences your self-concept. Therefore, when parents label a child, they impose qualities on them that might be completely wrong. However, they have an unfortunate tendency to become self-fulfilling prophecies.

In 1965, Robert Rosenthal introduced the term Pygmalion effect. This refers to the phenomenon whereby beliefs and expectations placed on a person influence their performance. For example, if a child has difficulty studying and he’s labeled lazy, he’ll ultimately assume that role and become lazy.

“A self-fulfilling prophecy is an assumption or prediction that, purely as a result of having been made, causes the expected or predicted event to occur and thus confirms its own accuracy.”

The dangers of labeling a child as lazy

Motivations drive and maintain a person’s behavior towards specific goals or purposes. Since motivation gives energy and direction to behavior, it’s considered the cause of the behavior. Therefore, motivation greatly influences children’s learning and growth and will determine their development.

What can you do if your child lacks motivation?

Here are a few pointers:

As you can see, you can take many steps to make a child work harder. However, calling them or treating them as lazy most definitely won’t help them improve in any way. In fact, it’ll only decrease their motivation. Consequently, they’ll show less initiative and willingness to take on any challenges.

The Burden of Other Peoples’ Projections: Labels
Labels can make you take on traits you don't have, which can be unhealthy. How can you shake off the labels others have given you? Read about it here. Read more »
Link copied!
Interesting Articles
Family
21 Strategies for Earning Your Child's Respect

Family
Why Do Parents Abandon Their Children?

Family
When You Wish Your Parents Had Been Different