How to Know If You're in an Overly Demanding Relationship 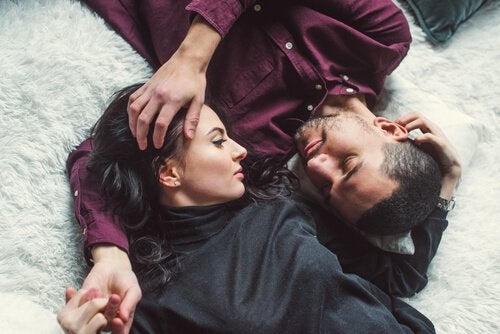 Influential journalist Walter Winchell said: “Never above you. Never below you. Always beside you”. Although that seems logical, it’s not what happens in every relationship. In fact, in an overly demanding relationship, there is a clear imbalance in the relational dynamics.

It’s quite normal for both partners to spend a lot of time together or think about each other a lot. However, it’s not healthy when we invade our partner’s personal space to such an extent that we hardly have a life of our own. This is what happens on a frequent basis in these types of relationships.

However, there are people who don’t realize that they’re completely immersed in an overly demanding relationship. This happens because they accept certain behavior patterns as normal. For them, the loss of intimacy and individuality is tied to the love they feel for the other person.

In this article, we share some signs that may indicate you’re in an overly demanding relationship.

Loss of autonomy in an overly demanding relationship

Eliana Heresi, a professor at the Diego Portales University, studied this. She says that the first sign that indicates you’re in an overly demanding relationship is the loss of autonomy. During the initial ‘falling in love’ stage, losing your identity a bit may seem normal, but once this stage is over, isolation starts to set in.

Thus, they can start isolating themselves from everyone else. Both partners usually don’t even realize this is happening at first, but sooner or later they become aware of a certain social isolation.

On the other hand, Heresi believes that a person needs a certain degree of individuality in a relationship. By that, she means that both partners should have their own social relationships and social circles.

If they lose all contact with others, they become more prone to abuse. Also, this could lead to jealousy, conflict in their relationships with third parties, and the deterioration of social relationships.

Another of the most striking aspects we identify in overly demanding relationships is asymmetry. Whenever one of the partners, or even both, show domineering tendencies, it prevents personal development and can lead to over-dependence, manipulation, or abuse. An example of an asymmetric relationship is when one of the partners needs the other’s approval all the time.

A healthy relationship is symmetric, where both partners are considered equals. If one of them were to rise above the other, then this symmetry would be lost. However, this can be difficult to recognize as it can be confused with love, instead of control or jealousy.

Another sign that can show someone they’re in an overly demanding relationship is when they try to recover their independence but their partner denies them that possibility. Although it’s not easy to see that this is happening, it is possible.

However, once one of the partners becomes aware, they may not be willing to face the problems that may arise from trying to get out of this situation.

In this context, finding new friendships and social relationships can be a positive thing for them. It can be as simple as having a coffee with a co-worker or family member.

“When someone shows you who they are, believe them the first time.”

Another thing we can find in an overly demanding relationship is the fear of being left alone if our partner leaves us.

Generally, these fears come from past experiences that may have occurred within the same relationship or in previous relationships. These experiences generate insecurity and can affect the bond with the other person.

In these cases, communication is necessary, but you have to be very careful and choose the right moment, words, and tone of voice. However, sometimes the reasons for this behavior are so deeply rooted that the couple will need to seek professional help.

Emotional Intelligence to Heal the Wounds of Our Relationships
We know that relationships, like bones, also break. Hence, emotional intelligence to heal those wounds is a good resource to close those internal scars. Read more »

Recognition is a very important part of our make-up, especially because of the contribution it makes to our well-being. By living as part of society, we expect recognition from other…

Aristotle said that anyone can get angry. However, getting angry with the right person, to the right degree, at the…

Wellness
7 Reasons Being Highly Sensitive Is a Gift

Surely you already know, as I do, that being a highly sensitive person (or a HSP) has its pros and…

Wellness
Don't Expect to Understand My Journey, You Have Not Walked In My Shoes

Don't expect anyone to understand your personal journey if they have not had to follow the same path. They have not…

Wellness
Enjoy The World Without Limits

You are born and before you know it, you find yourself in a world that is there for you. For…