Do You Know About the Uncanny Valley Concept? 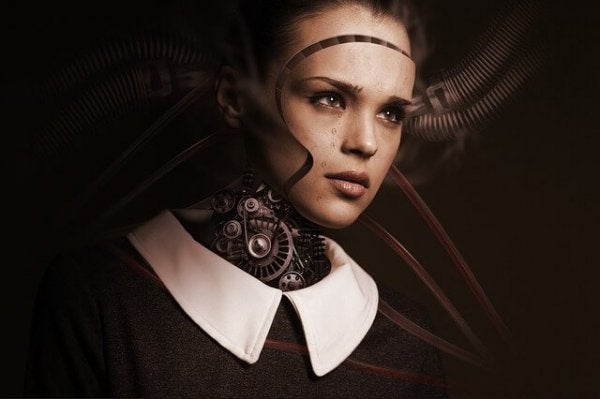 “When computers take over, we may lose control. We’ll survive according to their whim.” What do you think when you read this quote from Marvin Minksy, father of artificial intelligence? Does it concern yo? If the answer is yes, that feeling is justified, and according to the uncanny valley concept, it can be justified psychologically.

The current world is developing at a raging speed. Any smartphone that we carry in our pockets is more powerful than the computers that took men to the moon. As is evident, all this creates important advances, but it also causes certain concern. The speed at which technology is advancing is amazing.

What is the uncanny valley concept?

New technologies allow us to act in ways that we could never have dreamed of years ago. In fact, there are already totally artificial animated robots and beings that have a truly human appearance. If this type of ‘being’ concerns you, this isn’t strange. It’s a sensation that explains the uncanny valley theory.

According to professor Masahiro Mori, who identified this concept in 1970, the more a robot looks like us, the more we’ll reject them if we’re aware they’re a robot. However, if we’re not able to distinguish a robot from a human, our response will be more positive. So there’s a kind of ‘bump’ or ‘space’ in which we respond to those beings with a very strong rejection.

Mori created this concept in 1970 while he studied human reactions to robots. The idea of artificial intelligence and robots elicited the same response in men and women. Robots provoked a great rejection in both men and women, as shown in Pixar’s 1988 short film “Tin Toy”. The baby in the story was too similar to the real one, but not so much so as to provoke a positive reaction.

“Will robots inherit the Earth? Yes, but they will be our children.”

Theories about the uncanny valley

To this day, nobody has been able to definitively explain why this rejection occurs. However, several researchers have proposed theories to try and answer this.

The most accepted theory belongs to Thalia Wheatley, a psychologist at Dartmouth College. According to her, our brain has a stimulation evaluation system whose programming prevents us from selecting partners with health problems. This means that, if we see someone or ‘something’ that isn’t suitable for reproduction, our brain interprets it as a danger for the preservation of our species.

According to Wheatley’s research, the human’s evolutionary history is so refined that we can detect very small distortions. Once detected, these distortions create uneasiness around that being which may have physical or mental problems. This concern could explain the existence of the disturbing valley in the form of a natural response to perpetuate the species.

Criticism of the theory

This means that our brain can associate the appearance of an almost human, but not perfectly human droid, to a being with a serious illness. That’s why we have a negative reaction to it.

However, this logical theory also has its detractors. Many robotic specialists such as Ayse Saygin, a cognitive scientist at the University of California, pointed out that android technology isn’t sufficiently developed yet.

That means that this theory has no scientific basis to affirm the disturbing valley. Therefore, that disgusted feeling could be caused by simple cognitive dissonance. By observing characteristics similar to those of humans, such as facial expressions and behaviors, our brain creates certain expectations. When we’re not satisfied, there’s dissonance. This concept, regardless of whether it’s true or not, introduces the possibility that we can learn more about how human empathy works.

“The “laws of thought” depend not only on the property of brain cells, but also on how they are connected.”

Now, what do you think? Do you feel that restlessness when you see a machine that’s too similar to a human? If so, you may agree with Mori and his disturbing valley concept. It’s disturbing, isn’t it?

Hypochondria: When the Fear of Being Ill Becomes Real
Hypochondria or Illness Anxiety Disorder is one of the most common reasons for consultation among psychotherapy patients. Visit our page to learn more! Read more »
Link copied!
Interesting Articles
Stories and Reflections
Three Stories that Will Make You Think

Culture
The Fours Laws of Spirituality

They say there's a brief moment in life, when you feel more lost than ever, when an encounter occurs. An encounter…