JMW Turner, a Painter Tormented by the Sea

JMW Turner was a long-standing English painter who changed the artistic scene in his country. Find out why he's still one of the most important artists from that country! 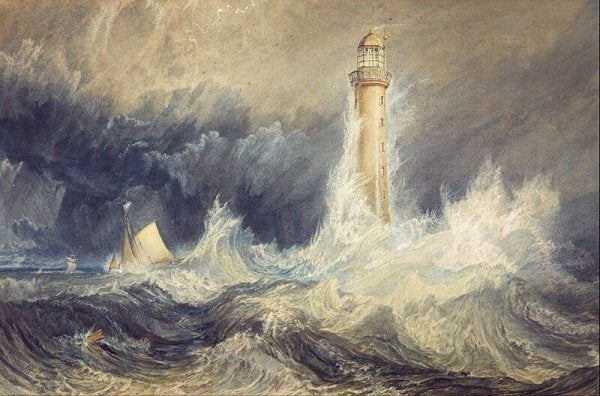 JMW Turner was an English painter who specialized in landscapes and narrative representations. In addition, he’s one of the most important precursors of French Impressionism. His paintings, highly prized today, stand out due to their bright colors and atmospheres.

Joseph Mallord William Turner, known only by his surname, was a nineteenth-century British painter. His family sent him to live outside London, in Middlesex, at the age of 10, where he began to attend middle school. However, he soon abandoned this education. At the tender age of 14, Turner enrolled as a student at the Royal Academy of Fine Arts.

Joseph dedicated his time to the production of watercolors during his early years as an artist. He even sold some of his work to the clients of his father’s barbershop. Thus, they were his first clients.

From a young age, Joseph preferred to travel and see new places rather than stay in his hometown. Then, his fondness for landscapes and natural settings became stronger. However, his technique was still very similar to that of other English painters of the time; quite rigid, that is.

In 1794, just before he turned 20, JMW Turner came across the works of Scottish painters, such as John Robert Cozens. They helped broaden his perspective of landscape painting and inspired him to produce more imaginative pieces.

Joseph was an exceptional artist, even for the expectations of his era. From the age of 21, he began to exhibit his pieces annually at the Royal Academy, an honor bestowed to few. Despite this, Turner never acquired overly refined manners and bourgeois tastes.

He always kept his accent, the one typical of the poor areas of London, and didn’t like wearing the clothes that people considered elegant at the time. In addition, he was kind of rough from a young age. Many critics acclaimed him and yet some of his contemporaries mocked his stuttering.

Between fuzzy skies and blurred contours

Already in the first works of JMW Turner, around 1805, one can appreciate his original way to represent a landscape. He emphasized the light in the atmosphere in a rather dramatic and romantic way of presenting it.

He increasingly blurred the boundaries between heaven and Earth in his landscapes and sacrificed the topography to make way for color. The light effects are the undisputed protagonists of his works.

In 1815, the great Tambora volcano erupted in Indonesia and there was volcanic ash in the entire northern hemisphere of the planet. The sky seemed cloudy and the sunsets became brighter for about three years. According to research conducted by the Academy of Athens in Greece, the colors in Turner’s skies may be the result of the high level of volcanic ash in the atmosphere.

JMW Turner was a prolific painter and also an avid reader. He enjoyed the works of Lord Byron and William Shakespeare. Between 1815 and 1820, Joseph traveled around Europe visiting the most prominent art hubs of his era. His stay in Italy was definitely crucial to his style and way of painting. After visiting Rome, the color in Turner’s works became clearer and brighter.

Turner always preferred movement and action over a sedentary lifestyle. It was for this reason that he constantly searched for ways to travel. During the following years, Turner visited a large number of places in England and Scotland and came across beautiful landscapes. After his father’s death in 1829, he preferred to stay close to the English coast, with its misty colors, wind, and gardens.

The old age of the great JMW Turner

During his later years, Joseph became richer and even more famous but also grimmer. He increasingly withdrew and focused mainly on painting as a form of expression. Also, he didn’t cultivate too many friendships.

In 1846, Turner lived in a small riverbank house in Chelsea with a widowed woman. However, he never stopped traveling. After many years of staying in his country, Turner began to explore Europe again. He produced around 19,000 drawings and paintings during the last 15 years of his life.

Joseph Turner died in Chelsea in 1851, and as stipulated by his will, all his works became the property of the National Gallery in London. His works survived over the years thanks to the efforts of the Tate Galleries in London.

The evolution of colors and light in Joseph’s paintings served as the foundations for various researchers to suggest that the painter had dementia. Experts indicate that one can psychologically interpret the abstraction of his paintings. However, colors and diffuse light may simply indicate a vision disorder.

Finally, JMW Turner was a pioneer in the study of light, color, and atmosphere. His works served as inspiration for many French impressionists. However, unlike them, Joseph always believed it was the duty of art to express a story. For this reason, Turner’s landscapes aren’t just landscapes, they’re mythological, historical, and literary narratives.

Ferdinand Magellan: Biography of an Epic Traveler
Ferdinand Magellan was the navigator and sailor who led the first voyage all the way around the world. Learn more about his life in this article! Read more »

Link copied!
Interesting Articles
Biographies
Greta Thunberg: The Activist Who Wants to Shake Up the World