Jack London: Biography of the Master of Adventures

Jack London was a master of the adventure genre. He wrote the same way he lived, with passion and curiosity and exploring the wild side of nature. 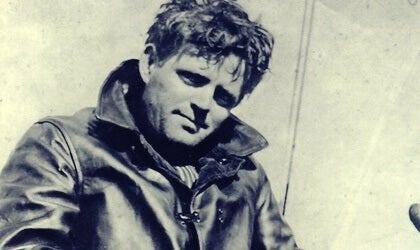 Jack London represented a literary essence where the wild became physical and inspiring. Never has the genre of adventure and books like White Fang or The Sea-Wolf marked so many generations with a unique and unmistakable style. This journalist, activist, and adventurer wrote as he lived: always on the edge, with tenacity, challenge, and intricately joined to nature.

Jack London started in the writing profession to make money and to flee poverty. Thus, with little or no training, he put all his effort into two basic tasks while he was still a teenager: reading and writing. However, it was clear to him that, in order to succeed in literature, he had to be able to offer something new, something never before seen.

The winds of adventure

He got an old typewriter that only typed with capital letters and began to travel. He wanted to follow the winds of adventure, and tell previously unknown stories. That he did as he roamed the Orient, went to Alaska, met smugglers, and even went to jail.

Jack London didn’t only give us classic adventure novels. This committed writer also spoke to us about important social issues such as sexual exploitation, alcoholism, and mental illness. They said that, inside him, there was always a wolf hungry for adventure and stories to tell.

Unfortunately, that overly hasty, passionate, and dangerous lifestyle took him out of this world early, as he died at the age of 40.

Jack London, the boy who aspired to be a writer

Jack London was born on January 12th, 1876, in San Francisco, California. His mother was Flora Wellman, a young woman with great musical ability who fell in love with an astrologer, William Chaney. Some say that London’s father was one of the most authoritative and renowned figures in this field. However, he never acknowledged he was London’s father.

Flora ended up marrying John London, an American Civil War veteran that gave her son his name. Their financial resources were minimal, so much so that they could barely provide an education for little Jack. However, from an early age, he knew what he wanted to become: a writer.

With that purpose in mind, he spent all his childhood and adolescence working. He worked in the railway industry, cleaning oysters and loading coal and in canning factories. He combined all these tasks with his constant visits to libraries, feeding on all the novels and travel books that fell into his hands.

The first adventures and the first books

In 1892, Jack London joined the California Fish Patrol of the California Natural Resources Agency. This allowed him to travel by schooner to Japan, get to know these lands and experience the effects of a typhoon first hand. That first experience left him wanting more and he’d always be hungry for adventure.

Only a year later, he became a member of Kelly’s Army, fighting for the social rights of the country’s unemployed. He was imprisoned for it, but he used those months to write his first novel, The Way of War. That small book won him a prize in a literary contest and made him think that it would be good to enroll in the University of California to improve his education.

However, economic problems and the “call” of the wild prompted him once again to flee far away and embark on new adventures. He’d travel to Canada, specifically to Klondike, where the gold rush began. This experience didn’t bring him any material benefit; he found no gold. However, it was the best experience he had, and one that inspired a good part of his books.

A committed journalist and writer

Jack London returned home in 1898. From then on, he had only one goal in mind: to have his stories published. He achieved this with To the Man on the Trail. Later, he published his work in The Overland Monthly, but he was offered little more than $10 for both. For A Thousand Deaths, he got $40.

However, his literary career really took off when magazines began to publish his travel stories, experiences, and adventures. In 1900, he earned almost $2,500 and was able to support his parents and enjoy a good life.

He became famous worldwide when he turned 27 thanks to The Call of the Wild (1903). In it, he told the story of a dog that finds its place in the world by pulling a sled in the Yukon. This was made into a movie with Harrison Ford in 2020.

Later would come The Sea Wolf, White Fang (1906), and John Barleycorn (1913), a book by way of reflection in which he detailed his battle against alcohol.

We should also highlight his work as a social journalist, covering, for example, events such as the Russo-Japanese war, the life of the Hawaiian population, social exploitation in the world, or the struggle of workers to obtain social rights.

Jack London married twice and had two daughters. He left an inheritance of 50 books and 200 stories, and gave lectures talking about capitalism, nature, and animals. Unfortunately, he couldn’t expand his work because his health did allow him to do so. He died at the age of 40, due to alcoholism and kidney problems.

Many historians think that he may have taken his own life, as many of his literary characters did. His remains are located in the Jack London State Historic Park in California.

Marcel Proust: Biography of the Nostalgic Writer
Marcel Proust sought the refuge of his room to write and express every living moment of his past, which he reflected in his work "In Search of Lost Time". Read more »
Link copied!
Interesting Articles
Culture
My Partner Doesn’t “Help Me” at Home: We Collaborate

Culture
The Key to a Long Life

We tend to understand a single life as an emotional failure, and therefore a disaster. As harsh as it sounds, our society punishes people who are single. We can see this very clearly when we can't…

Culture
Why Don't I Get Angry?