J.R.R. Tolkien: A Life in Books

J.R.R. Tolkien's life is as inspiring as his work. The creator of the marvelous Middle Earth experienced many hardships that partly inspired his creations. Read more about him here! 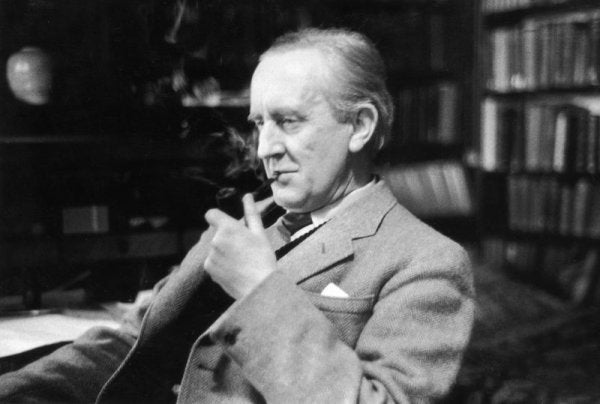 Known for his great literary works that shaped modern fantasy, Tolkien’s life could have made for a great read. In fact, some of his most notable poems were inspired by his relationship with his future wife. J.R.R. Tolkien was marked by his childhood as an orphan, war, love, his deep religious beliefs, and his incredible literary mind.

We know through his letters that Tolkien didn’t draw inspiration from the historical or political events he lived through or that directly affected him. However, his work was marked by the melancholy of his life. His sense of love, faith, or his love of nature were the basis for many of his characters.

Tolkien was born in 1892, in Orange Free State, in what’s known today as South Africa. His father was a British banker, who later died in South Africa. He traveled to Great Britain with his mother and brother and lived with them until he was 12-years-old. They had no support from the rest of their family because Mabel had converted to Catholicism. At the time, the Catholic Church wasn’t in good standing and it was considered shameful to be a part of it.

In 1904, Mabel died and left her children under the care of a Catholic priest. His name was Francis Xavier Morgan, Hispanic-British descent, who played an important role during the brothers’ youth. The priest paid for their education and found them places to live. That care and love made John Ronald really respect the priest.

Precisely there, in one of those rented houses, John Ronald met Edith Bratt, when he was 16-years-old. An orphan and three years his senior, they soon professed their everlasting love to each other. To Father Francis, this was an inconvenience, because he believed she might distract John Ronald from his studies and from getting a scholarship. Above all, she wasn’t a Catholic.

Through his letters, we now know how painful all this was to Tolkien, but he decided Father Francis was right. Thus, after a few getaways together, they split for three years.

The Birth of a Genius

After a failed attempt, when he was 18, Tolkien got a scholarship to Oxford, while Edith worked in Birmingham. While in Oxford, he met three great friends and formed the TCBS club, where they shared a love for literature and languages.

From an early age, he had toyed with the idea of creating languages, thus finding inspiration in Germanic dialects. Along with his friends, he had an idea about creating a mythology for England, like the Greek or Romans, and Tolkien’s languages would become a part of it.

The day he turned 21, he wrote Edith to rekindle their love, but she had got engaged. Tolkien, never the quitter, traveled to Birmingham to convince her, and it worked because soon after the two got engaged.

In 1916, after convincing Edith to convert to Catholicism, they married. That same year, he left for France to fight in the Great War. There, he lost two of his great friends and became ill. He was never the same after that.

“For even the very wise can’t see all ends.”

J.R.R. Tolkien and His Literary Works

His hard work and discipline earned him a teaching position as an English professor. Nonetheless, he continued writing, drawing inspiration from his time as a soldier and the loss of his great friends. Little by little, he created a magical universe he shared with some of his colleagues, such as C.S. Lewis, and formed the Inklings. Many of his ideas came from stories he read to his children or from family gatherings.

Due to his incredible perfectionism, he rewrote many things, even more than what he published. The first work he did on Middle Earth was The Hobbit, and in his lifetime he’d only publish Lord of the Rings. All the other published texts regarding this universe we owe to his son Christopher.

In short, all the hardships in his life proved to be decisive in many of his creations. That idyllic view on traditional life comes from his experiences as a young orphan in an industrial city. Likewise, the Ring’s tragedy comes from his Catholic interpretation of the world. The impossible love stories are a reflection of his own romantic life. His characters’ camaraderie is most like what Tolkien experienced himself. Reading about Middle Earth is reading a little about him.

How to Write Like Stephen King
Through interviews, Stephen King says that the key to be a better a writer is to challenge yourself and never stop. Let's dive into Mr King's mind! Read more »
Link copied!
Interesting Articles
Literature and Psychology
George Orwell: Biography, Manipulation of Language, and Totalitarianism

George Orwell was a British novelist, essayist, and journalist whose novels Animal Farm and 1984 made him a household name.…

Literature and Psychology
Emotionary: A Wonderful Book About Emotional Education