Do you know the four existential worries we all face throughout our lives? You can find out what they are in this article about Irvin Yalom, one of the pioneers of existential psychotherapy. 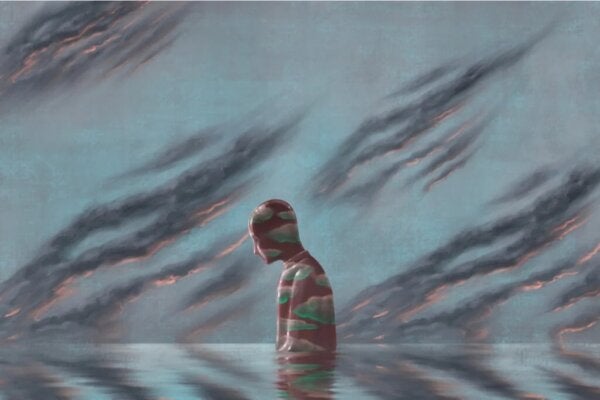 One of the most important figures in the field of existential psychotherapy is psychiatry and psychotherapist teacher, Irvin Yalom. In fact, he’s written many essays and novels. Among them are The Spinoza Problem and When Nietzsche Wept. Yalom usually manages to quite subtly include in his works his four existential concerns of humans. These are death, freedom, isolation, and meaninglessness.

It’s difficult to define existential psychotherapy. To do it, you need to take a philosophical approach. An approach that considers the difficulties of people as agents in the process of evolution and change.

People are confronted with certain aspects of their existence. These concerns are what Yalom refers to with his four existential concerns. Such experiences often lead to existential anxiety or “angst”. This anxiety is a feeling that motivates people’s personal growth.

Existential concerns, according to Irvin Yalom

When you come face to face with your own existence, you feel discomfort and suffering. In fact, Yalom claims that his four existential worries are inherent in the lives of us all.

However, sometimes, these issues become disguised within other distractions in your life. They’re always there though, even if you don’t notice them.

In his group and individual therapy, Yalom encompasses these four basic and universal concerns. Let’s find out what they are:

Yalom’s first concern is death. Indeed, death brings you face to face with your own existence. Yalom claims that this is a major source of anxiety.

In fact, worry about death can cause the development of psychopathologies. However, accepting death can also allow you to live an authentic life.

In other words, confronting death isn’t just about realizing the finiteness of life. It’s also about understanding that the passage of time is uncontrollable. However, it’s what you do with your time that matters, knowing that life will always come to an end.  A novel that highlights this existential concern is Leo Tolstoy’s The Death of Ivan Ilyich.

Freedom is another of Yalom’s existential concerns. Here, he mentions your sense of will, your freedom in decision-making, and your management of responsibility in existential isolation. It concerns the fact that, even though you might listen to other’s opinions, you ultimately make most decisions entirely on your own,

Consequently, freedom has its drawbacks, because sometimes taking charge of your own existence can weigh you down. In fact, it often paralyzes you and you end up doing nothing. This is exhibited in the tale of Buridan’s ass. In this story, a hungry donkey is placed at an equal distance between two identical bales of hay. However, it eventually dies of hunger because it can’t rationally choose between the two.

Now you’ve accepted that life isn’t infinite and that it can end at any moment. Furthermore, that you can’t escape the connotations (positive and negative) of freedom, you come to Yalom’s third existential concern. This is isolation. Yalom identifies three types of isolation. These are interpersonal, intrapersonal, and existential.

“Every man is born as many men and dies as a single one.”

Meaninglessness is Yalom’s final existential concern. The meaning of life is important for everyone. Meanings give rise to your values, which give you a meaningful life.

Your values give you relief from these four existential concerns. They provide you with the answer to what life’s all about. Furthermore, they give meaning and significance to your other concerns. In fact, they give you your personal action and belief system.

Along with Viktor Frankl and Rollo May, Irvin Yalom remains one of the most influential figures in existential psychotherapy. This article has only briefly touched on Yalom’s four existential concerns. It’s impossible to describe his work in so few words.

Rollo May: The Father of Existential Psychology
In the world of psychology, Rollo May was a complete innovator. Above all, he allowed people to understand the adverse experiences of the human being. Read more »

Link copied!
Interesting Articles
Philosophy and Psychology
Some of Goethe's Most Powerful Quotes