Positive thoughts can be irrational thoughts and as counterproductive as negative thoughts. This article explains the relevance of well-crafted cognitive restructuring and the dangers of positive mismatched thinking. 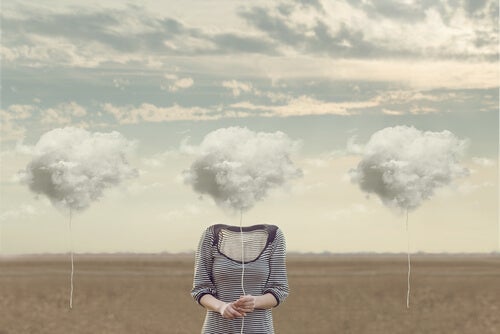 The Socratic debate about irrational thoughts and their adjustment stands as a clear objective in most of the discussions that take place in the field of psychology. From disorders of social anxiety to violence in interpersonal relationships, even to post-traumatic stress.

Cognitive restructuring is an analogy of psychological treatment. It even seems to have passed the pronounced borders of the different models and psychological currents. Always trying to find out which is the most legitimate, the most useful, and the most effective.

Cognitive restructuring, which can be put into practice from the evaluation itself and be useful until the end of therapy, seeks to detect an individual’s irrational thoughts to raise alternative thoughts about that same idea. What’s more relevant, than a person who’s able to see the impact of those irrational thoughts on their mood. Also, to perceive their subsequent awareness and their behaviors.

The more cognitive restructuring becomes a common practice, the more we understand that the individual will be able to detect their own irrational thoughts. Furthermore, they’ll propose much more appropriate substitute thoughts.

However, developing that kind of unyielding thoughts often confuses people by proposing positive thoughts instead of rational thoughts.

Differences between Irrational and Rational Thoughts

Irrational thoughts elicit highly unpleasant emotional responses. These can range from anger to bitterness and even terror. They’re long-term and raised in absolutist terms –with the use of adverbs as “never” or “always”. This, in turn, has to do with that which one needs to be happy. Or, what one should be, do, or have. That is, with self-imposed demands.

In addition, these thoughts are usually non-verifiable. On the contrary, rational thoughts are posed as provable. They generate emotions of much lower intensity. For example, disgust, instead of anger; resignation, instead of bitterness; fear, instead of terror.

It’s important to emphasize that neither anger is replaced by happiness. Nor is bitterness by satisfaction nor terror by courage. Rational thoughts have to be realistic and adjusted. If it’s put in overly positive terms it will also become an irrational thought.

Furthermore, if an individual understands alternative and rational thoughts as positive thinking, they’ll almost certainly be unable to propose such thoughts. In turn, a diminished state of mind and tunneling towards the negative will turn such a task into something Herculean.

For example, imagine that a 40-year-old woman named Patricia loses her job as a clerk in a bank. The irrational thoughts that Patricia may have are: “I’ll never find a job again”, “I’m useless”, or “I should have worked more hours”. As we previously discussed, one can observe, among other things, absolutist terms that aren’t verifiable.

With practice, Patricia could raise alternative rational thoughts that are much more appropriate to the situation. For example: “I don’t know if I’ll find a job again, but I’ll do my best to get one”, “I’ve lost my job but that doesn’t mean I’m useless. They just didn’t need me anymore and it isn’t personal. I’m still a worthy person“, or “I could’ve worked more hours but I don’t even know if it had anything to do with me being fired”.

As you can see in the second set of thoughts, they have no absolute terms. The conclusions weren’t rushed into from inferences or pejorative labeling of oneself from external events.

It could be that Patricia doesn’t know how to substitute irrational thoughts appropriately. Or that the explanation or guidelines she received aren’t appropriate. That she truly believes that, in this situation, the alternative to irrational thoughts is something like: “Tomorrow I’ll find work and I’ll make the same money I made in the bank”, “I’m the best worker out there and my skills are superior to everyone else,” or ” I’m sure that working more hours has nothing to do with my dismissal and it only happened because the boss didn’t like me”.

Contrary to what we hear in popular culture, positive thinking doesn’t mean everything is going to go your way. Therefore, this kind of thinking is full of traps.

Authors such as Barbara Ehrenreich or Derren Brown already speak of the harm of over-the-top positive thinking. They explain how it’s deceptive and you may reach conclusions that may be quite inadequate and unreal. Conclusions based on attributions and inferences that have zero empirical validity.

It’s important to make judgments in a well-adjusted manner. Irrational thoughts can be negative. In fact, the vast majority are negative, and yet they can also be positive. While the former can lead to exacerbated emotional responses when considering them, the latter can also lead to emotional expressions that are too intense. Especially when you can’t fulfill them. Or when they lead to excessively high expectations because they aren’t based on facts and truthful information. Also, when considered in absolutist terms.

It’s also important to pay special attention to the conception of an individual. That they understand the parameters from which rational thought arises. To do this, you should begin practicing with examples or metaphors and then work on the irrational thoughts of a person.

Furthermore, you should previously train. So, that when it comes to automating the proposal of the daily alternative thoughts, there’s a certainty that it’s the most convenient, effective, and useful way there is for a given person.

Identifying Your Irrational Beliefs Can Improve Your Well-Being
In this article, you'll learn to identify irrational beliefs and take a look at how identifying them can improve your well-being. Read more »
Link copied!
Interesting Articles
Clinical Psychology
Do You Suffer From Anxiety-Induced Chest Pain?