Inca Garcilaso de la Vega is one of the fathers of Hispanic American literature. He was the first author to capture the soul of the mestizo people born in the Americas. 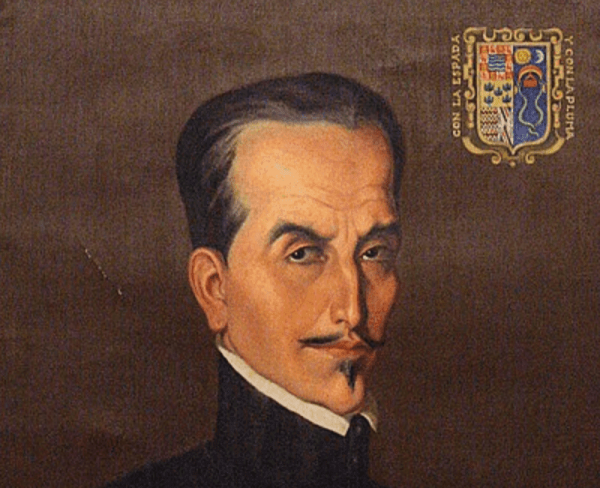 We celebrate World Book Day every year on April 23rd in honor of April 23rd, 1616. Most people think that this date is significant because it was the day both Miguel de Cervantes and William Shakespeare died. However, Miguel de Cervantes actually died a day before and was buried on the 23rd. Shakespeare did die on the 23rd, but according to the Julian calendar that the British used at the time, he actually died on May 3rd. However, one prominent author did die on April 23rd, 1616: Peruvian author Inca Garcilaso de la Vega.

The author was born to a Spanish conquistador and an Incan princess from the Huayna Capac and Topa Inca Yupanqui family.

Not only was he a descendant of royalty and warriors, but also great writers such as Jorge Manrique, the Marquis of Santillana, and Garcilaso de la Vega. Although he was baptized as Gómez Suárez de Figueroa, he later changed his name to honor his ancestors.

In spite of Garcilaso’s illustrious family history, he was born into a difficult time. His father was one of the first Spanish people in the Americas, along with famous men such as Pedro de Alvarado, Hernán Cortés, and the Pizarro brothers.

At that time, it was illegal to marry indigenous people from the New World, so Inca Garcilaso was an illegitimate child. Nevertheless, he still received an excellent education in Cuzco along with other illegitimate children from important families. Historians believe that his love for literature was born during his early school years.

In 1560, when Garcilaso was 21, he made a trip to his father’s homeland. He joined the military and saw combat in Italy as a captain. He also helped quash Moorish rebellion in Granada. When he was in Italy, he met neo-Platonic philosopher León Hebreo and translated his text Dialogues of Love from Italian to Spanish.

Perhaps this encounter with writing inspired him to become an author. Or perhaps the obstacles he faced in the military as a mestizo frustrated him, which is why he decided to write. Either way, Garcilaso’s decision changed his life completely.

After surviving his military adventures, Garcilaso settled in Montilla, Córdoba. During this time, he became one of the most unique voices who wrote in the Castillian language. Because of his father and his personal experience, Garcilaso knew about the things that happened in the early years of the Spanish conquest of the Incan Empire.

During his stay in Europe, he also received news of Hernando de Soto and his men in a new land they called “La Florida”. Garcilaso wrote about these events, along with many of his contemporaries. The thing that distinguished Garcilaso from the rest was his heritage.

He knew about the glorious history of Peru before the conquest from the stories his mother told him. The experience of growing up with this mix of cultures, stories, and languages made Garcilaso’s writing unique. Ironically, the very thing that had held him back in so many ways is the reason we still remember him today.

Few authors have been able to capture the romantic heroism that motivated Castillian explorers. There’s no doubt that these epic tales had their fair share of tragedy, and Inca Garcilaso’s vision of pre-Colombian American is certainly tragic and memorable.

The Father of Ibero-America

Luck made Inca Garcilaso a pioneer. Although he wasn’t the first American mestizo, experts consider him the first cultural mestizo.

At the heart of his writing is the contradictory but compatible soul of a new kind of nation being born in Spanish territories. It was the soul of Latin America, the soul of the mestizos.

Focusing solely on Garcilaso’s unique voice wouldn’t do his writing justice. Inca Garcilaso’s prose is on the same level as the best authors from the Golden Age. He knew Luis de Góngora and Miguel de Cervantes personally, which certainly made him love his mestizo roots even more.

Garcilaso wrote his most important texts later in life, which at least partially accounts for his conservative and reflective style. In addition, his love of philosophy gave his writing a transcendental quality.

For Garcilaso, being a mestizo was an obstacle he had to deal with for most of his life. In his old age, however, he writes that it was a source of pride. In the end, his life is an excellent metaphor for all of Latin America. Garcilaso was recognized for his work before he died, and it seems fitting that he shares the date April 23rd with two of his heroes.

Eduardo Galeano in 20 Memorable Quotes
An exceptional man, Eduardo Galeano, has left us. Without a doubt, he was a man who did not leave anyone feeling indifferent. Read more »
Link copied!
Interesting Articles
Authors
Wilhelm Reich and His Approach to Sexuality