How Unconscious Guilt Manifests Itself

Many times unconscious guilt manifests itself through depression and anxiety. In depression, there's a feeling of dissatisfaction with oneself and the world. In anxiety, through the expectation of harm or punishment. 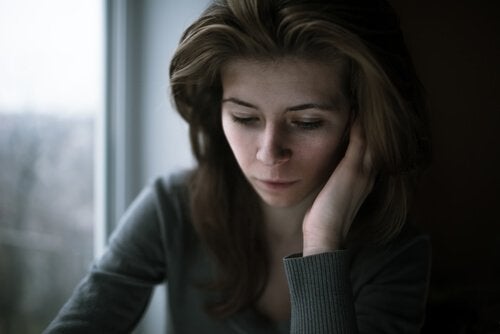 Guilt is a complex feeling, influenced by many factors. You experience it as remorse, self-blame, and a feeling of personal indignity. However, it’s not always a conscious feeling. Some experiences lead to unconscious guilt, which is a self-accusation that causes discomfort without you even realizing it.

Unconscious guilt is almost always related to taboo or unbearable events or situations. Sometimes, it stems from actions. However, other times it stems from thoughts or desires that you consciously reject.

“Every man is guilty of all the good he did not do.”

In some cases, unconscious guilt is related to aggression or sexuality. In other words, there are feelings of desire that a person experiences that become intolerable. For example, some aggressive behavior towards a person they love or incestuous desires.

What makes unconscious gift so harmful is the fact that a person doesn’t recognize it, but represses it. However, also unconsciously, that guilt reappears and manifests itself. For example, through self-sabotage, anxiety, melancholy, and even criminal behavior.

One of the usual ways unconscious guilt manifests itself is through constant discomfort with oneself. Psychoanalyst Franz Alexander points out that the basic mantra of a guilty person is: “I’m not good, therefore I deserve punishment”. Thus, this is more than just a self-esteem problem.

This type of guilt leads to persistent self-rejection. Nothing the person does satisfies them completely. Thus, they’re hypercritical of themselves and discredit their thoughts, feelings, and actions. Very often, this leads to states of depression and unremarkable lives.

Medical professionals tend to diagnose this as “depressive guilt”. In extreme cases, it can paralyze a person’s life. Feelings of unworthiness can even make a person feel that they don’t deserve to live. Additionally, they become excessively irritable and are constantly in a bad mood.

Some of the most frequent manifestations of unconscious guilt are anxiety and anguish. Specifically, anguish is an imprecise but intense feeling of concern. It’s as if you feel like something terrible could happen, but you don’t know where the threat comes from or why the catastrophic event will occur.

This type of guilt is called “persecutory guilt”. Sometimes, it can be very invasive and fill people’s minds with anxiety. Usually, there’s an object or idea that the person fears and this fear becomes the persecutor. For example, the object could be sickness, old age, or a god, among other things.

In these cases, a person begins to direct their behavior towards appeasing that object. Or sometimes they do everything to avoid or protect themselves from it. In extreme cases, these feelings can lead to criminal behavior because the person wants to get caught to be punished.

As we pointed out at the beginning, guilt is a complex feeling in which many factors intervene. For example, family, culture, religion, and values all have a great influence. Someone with a very conservative upbringing may come to think that experiencing sexual desires is a bad thing.

Many people also experience unconscious guilt for events that took place during their childhood. Of course, many times they had no control over these things. For example, arguments and fights between their parents. Or, as a child, they could’ve been the target of physical abuse, or, even worse, sexual abuse.

Sometimes, unconscious guilt can even arise simply for being alive. “If I hadn’t been born, my mom could have gotten her degree.” In some cases, guilt seems to be different. Several experiments prove it.

Feeling guilty and taking responsibility for your mistakes are two very different things. The first only leads to discomfort. It starts an endless self-torture that only ends in psychological deterioration. The second is a conscious and adult way of evaluating your behavior and, above all, accepting it.

Illness and Guilt: What’s the Connection?
Illness and guilt is a bad combination that affects a lot of people. Likewise, it makes us go through even more suffering. Read more »
Link copied!
Interesting Articles
Experiments
The Science of Evil