How much Time Can a Person Go without Sleep? 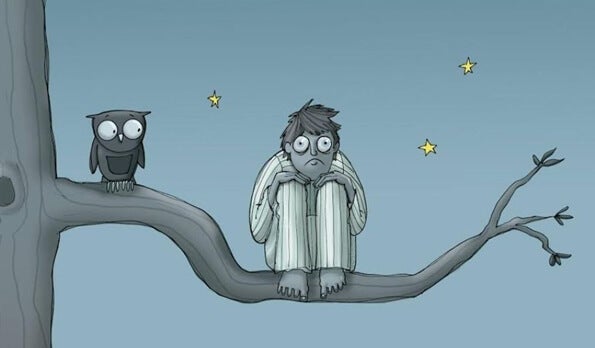 Sleeping is not only a pleasure, but also a necessity. Both the act of falling asleep and of dreaming have been mysteries for human beings for as long as we have existed. None of our functions stop sleeping, except our consciousness. The rest of the body is still active, as well as the mind.

Generally, we all know we should sleep eight hours during the night. However, it is also true that many people do not do this. There are those who only rest four hours or less and they feel like new when they wake up. There are also those who need more than 9 hours to feel like they really rested.

“Insomnia is a gross feeder. It will nourish itself on any kind of thinking, including thinking about not thinking”.

The number of hours we sleep changes with age, with our habits and with the characteristics of the person. When we are born, we need a lot of sleep. When we get older, we get used to short, intermittent sleep. There is no fixed pattern.

We still have questions for which there is no definitive answer. One is, how much time can a person go without sleep? The little information we have has come from voluntary experiences. It would not be ethical to subject someone to not sleeping for a long time, just to find out where our limits are.

What is sleeping for?

Most of us would never dream of asking why we need sleep. It is obvious to us that the body is fatigued during the day and therefore needs rest. The most natural way to get that rest is sleep.

However, if you think about it, this is not so obvious. Actually neither the body nor the brain is “deactivated”, so to speak, when we go to sleep. It is true that we only move slightly. Our muscles reach a state of relaxation. We stay in one place and only move a little to get into a better position. But, at the same time, all our organs are still functioning.

The brain also has a lot of activity while we sleep. On the one hand, we dream. Our mind constructs scenarios and situations that involve thoughts and emotions that are sometimes very intense. There are also those who talk or walk in their sleep. Also, a part of the brain is still awake. If there is a loud noise or there is a danger, an area of ​​our brain alerts us to wake up.

So, finally, when we go to bed, the only thing we rest is our movement and our attention. Science has not yet managed to determine exactly why we sleep. We know that sleep influences the production of myelin, the formation of new neuronal connections and the elimination of brain waste. However, until now there is no comprehensive and conclusive answer about its exact role.

What happens when you don’t sleep

We have all not slept enough some time in our lives. We know that feelings of fatigue, surreality and sometimes headaches, dizziness and nausea arise. Mental activity also slows down and we easily lose concentration.

When we stay awake too long, other symptoms appear. Among them are: blurred vision, muscle pain, weakening of the immune system, tremors in hands and legs, increase in cholesterol levels, anxiety, depression, migraines, increased blood pressure, irritability and memory problems. In even more severe cases, hallucinations and psychotic behavior are common.

There are some indications that not sleeping could cause brain damage. This conclusion, though not definitive, was reached in an investigation carried out in Sweden. 15 volunteer adult men, with an average weight, were asked to spend night without sleep. This group was monitored after the night with no sleep and after another night in which they slept eight hours. Researchers were looking for the changes that happened.

The researchers found a high concentration of two molecules associated with the brain in the blood of the individuals studied. This finding led them to believe that there had been a deterioration in brain tissue. After a night of sleep, the composition of the blood was normal. This was just a short-term experiment, so it couldn’t show long-term changes.

The maximum time to go without sleep

We don’t know exactly how long a person can go without sleep. Officially, the record for the most hours without sleep is held by a high school student named Randy Gardner. In 1965 he spent 264 hours awake, that is, 11 days. He was doing a science fair project. The case was documented by psychiatrist J. Christian Gillin, professor of psychiatry at the University of California.

The student was 17 years old and those who observed him said that during the time he was awake he developed several symptoms. He showed cognitive deficiencies, speech and vision problems and even hallucinations. There are also stories that there are people who have endured more time without sleep. People say, for example, there was a British woman who spent 18 days awake to win a competition. However, this cannot be corroborated.

It is also known that there are about 40 families in the world who suffer from a strange disease called “fatal familial insomnia”. It is a genetic defect that alters the nervous system and generates a kind of hole in the neuronal tissue. Those who suffer from this problem reach a point where they cannot sleep. After a few weeks they behave like sleepwalkers, weaken and finally die.

Can lack of sleep lead to death?

People who suffer from fatal familial insomnia die after a time of not sleeping, but not because of lack of sleep. What causes their death is generalized brain damage. Not being able to sleep is a symptom of the illness, but not the reason.

In the 1980s an experiment was carried out in the Allan Rachtschaffen Sleep Research Center at the University of Chicago. The study observed inability to sleep in a group of rats and its consequences. They prevented the rats from falling asleep by applying an electric current whenever they tried to sleep. The result was that after a period of time, between 11 and 32 days, most of the animals had died or were dying.

Scientists agree that lack of sleep causes people to become a little “crazy”. It is clear that the normal functions of the brain are altered. People are stressed, they are very irritable, they start to have erratic behavior and even hallucinate. Sometimes they end up talking about nonsense. All that happens. However, it is also clear that when the person returns to their normal sleep pattern, all these symptoms disappear and no visible consequences remain.

Despite this, it is not unreasonable to think that lack of extreme sleep could lead to death. Severe damage to the nervous system would be potentially harmful to different organs of the body. It would start a chain that could eventually have a fatal outcome. We also think that there is a point where no person would be able to stay awake. Even against their will, they would fall asleep.

5 Secrets to Sleeping Like a Baby
When you sleep like a baby, you think more clearly and have energy to face the day. You learn better and it protects long-term memory, too. Read more »
Link copied!
Interesting Articles
Culture
5 Advantages of Travelling Alone

Travelling alone is an unforgettable experience. All who have done it recommend it. It is a way of travelling unlike all…

Cinema, Television, and Psychology
The 5 Best Movies about Alzheimer's Disease