Houdini Syndrome: Not Being Emotionally Available 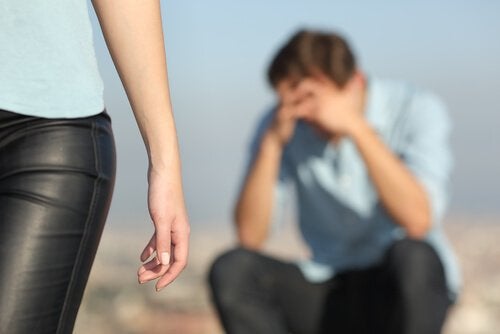 Houdini syndrome refers to the escapism acts from the mythical Hungarian-born American escapist, Harry Houdini. However, in this article, you’ll read about the psychological escapism triggered by avoidance. This is when people escape from family gatherings, jobs, and daily duties.

War of egos, indulgences, and even how difficult it is to express yourself without harming your partner are common in interpersonal relationships. However, the fact that many people escape from these relationships is a deeper symptom of the lack of commitment of modern societies.

In many cases, there’s a direct connection. The bigger the commitment, the bigger the need to escape. It comes naturally to many people, but what really causes this behavior? Why is it so complicated for these people to truly get emotionally involved?

Being emotionally involved has never been as questioned as it is today. Social ties have always been a very active part of our species’ evolution.

Involvement can also mean the opposite: detachment. Feelings and the ability to show them are essential to empathize with others.

Even Houdini would be surprised

The concepts of family and herd mentality have been distorted. You’re part of an individualistic society, where youth movements have become even more dispersed. This isn’t seen just in romantic relationships, but also in friendships, which can evolve into utilitarianism.

Usually, Houdini syndrome has several stages. These stages are part of a process that begins with an emotional commitment to total rejection. Let’s see what the main characteristics of these stages are:

A society that doesn’t want to help

You’re living in an individualist society that doesn’t necessarily undertake relationships. Technology has given society a complete grasp of communication.

Nowadays, you don’t need to be next to someone to actively relate to them. This makes it easier to break relationships off because you don’t have to justify yourself face to face. Bonds now go beyond those who are physically around you.

In this context, nowadays there are many devices that facilitate social relations. For example, Tinder or Facebook, where you can contact people from all other the world or find a partner in no time. People aren’t vitally needed anymore. There’s a people bank with many other people on hold.

Fast change social bonds make love’s ecstasy and friendships last too little. Once that bond’s finished, you go back to the social market to find the novelty’s ecstasy. This is how there’s now a sort of feelings’ supply and demand with novelty as a common denominator. In this market, superficiality reigns supreme. A striking social media profile is essential.

Houdini syndrome can stem from your youth. Many relationship experts believe that one possible cause is little to no emotional education in your teenage years. Teenagers are constantly bombarded with stereotypes of how relationships should be.

Even if there are certain people that identify with this syndrome, its effects and characteristics are a product of social phenomena. The syndrome can be shown in many ways, and depends on many factors, such as the person’s personality.

How can you detect Houdini syndrome?

To analyze Houdini syndrome, you need to analyze yourself. Many times, people find themselves complaining of this, but they see other people as a plan B.

The emotional involvement leads to selfishness. So, how can you detect an escape artist? By their inability to commit beyond their own interests.

Here’s the dilemma. Can you really involve yourself completely? If you commit yourself in a shallow manner, you can expect to form strong and everlasting bonds, if you see them as a risk. So, using people and running away from them repetitively is a clear symptom of emotional weakness. Weakness can be expressed in many ways.

People don’t have to be an escape artist to fit into the profile defined in this article. Analyze your behavior, and if you notice a characteristic similar to this, stop it before it turns systematic. Some cues for this are:

The saying “There’s a thin line between love and hate,” became “Love and hate are only a text away”. Although you might identify a sufferer of the Houdini syndrome in people from your past, you need to be objective. Individualism and the speed at what everything’s changing now is also a part of modern relationships. In a way, they’re more demanding of better social qualities.

Affection in Relationships
According to some research, affection in relationships is an important element that reinforces the bond between partners. Find out more! Read more »
Link copied! Next
Interesting Articles
Romantic Relationships
Philophobia: The Fear of Falling in Love