Hollywood is one of those series that critics can't agree on. In this re-imagining of well-known stories and people, its value lies in the poetic justice that blurs the stereotypical roles of the era. 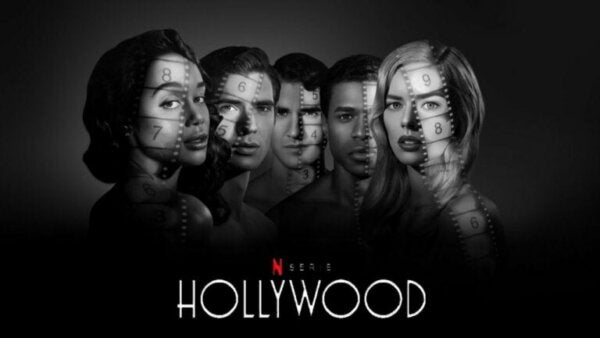 In just seven episodes, Hollywood managed to re-write history. The new Netflix series from Ian Brennan and Ryan Murphy has completely divided critics. They either love it or hate it. Many people believe that it’s a superficial and delusional re-write of an age defined by glamour and inequality.

Hollywood takes you back to the golden age of the city of stars, when cinema was the highest form of entertainment. It invites you to travel to Hollywood in the 1940s and 1950s, to the place where dreams seemed to come true on filmstrips and the stars were like gods.

However, behind all the glitter and glamour were some dark realities. The beginning of the series invites you into a cruel, ephemeral, and unfair world. It imagines what the Oscars would be like now if you really could re-write history. In the city of dreams, anyone can imagine a different world.

When we say that Hollywood is a re-write, we mean that it writes a new story over a true background. Therefore, perhaps the concept of palimpsest gives a more accurate description. A palimpsest is a manuscript that has been erased to be able to write more over it, though it keeps some traces of the original content.

When you think about it, any story based on real events has some element of palimpsest. After all, a true background doesn’t stop fiction or imagination from giving its own spin on things. In the case of Hollywood, you can clearly see the era that’s being re-told. It’s a time when a pretty face and good image matters much more than the quality of an actor or actress. There are also some well-known characters, such as Rock Husdon and Vivien Leigh. Most of what you see, however, is pure fiction.

Ryan Murphy fans know that the screenwriter is a huge fan of the golden age of Hollywood. He especially likes actress Bette Davis. In 2017, in fact, he brought one of the most famous Hollywood feuds to the small screen in his series Feud: Bette and Joan.

That might be why some viewers and critics were expecting a more biting criticism of the “golden age” and the film industry. In Feud: Bette and Joan, Murphy has fun with the setting and his actresses, but points directly to those responsible for the feud. The show is a harsh criticism of the industry.

Hollywood, however, isn’t like that. History can be re-written in countless ways. You can include a lot of what actually happened or you can completely reinvent it.

In that sense, Hollywood probably reminds a lot of people of the recent Tarantino film, Once Upon a Time in Hollywood. Not because they’re both about the film industry, but because they both start with a tragic, true story and give it a fairytale ending.

Hollywood is nothing more than that: a fairytale. The critique it does make of the past is subtle and indirect. The critique lies in the way that the story changes the past; in that poetic justice that would change our present forever. And while the series has caused a lot of controversy, critics and audiences tend to applaud its atmosphere and staging.

What if things had been different, homosexuality hadn’t been a problem, stars had been able to live their lives without consequences, and racism didn’t exist?

Maybe, for audiences today, being in a movie isn’t an unachievable goal, and the lives of the stars aren’t hyper-idealized. We live in a world where everything about people’s personal lives is pretty out in the open. We know that our idols aren’t perfect, and more and more are willing to talk about their imperfections. Stars use their influence to try to make a difference regarding issues such as mental health and eating disorders, etc. However, in the 50s, movies were the most popular form of entertainment and a platform used to reinforce the norms.

As a result, movie stars felt obligated to hide anything about themselves that diverged from social standards. Sexual orientation, for example. While it’s true that beauty standards are still quite limited, we’re witnessing a movement with the goal of dismantling imposed ideals.

Therefore, Hollywood happens in a past where everything was hidden. A world in which equal opportunity was nothing more than a dream that you didn’t even see on film.

The interesting thing is that it tells the story of a young man who, like so many others, feels like he has a chance in that factory of dreams. The young man’s name is Jack, a war veteran whose wife is pregnant with twins. However, far from idealizing his character, you see how his money problems contrast sharply with his dreams of being a big star.

Between harpies, agents who think they own their clients and their lives, and women who live in their husbands’ shadows, the show’s characters have to fight for a project that goes against all the industry standards.

A film made by dreamers

The project is called Peg, later Meg, a film written by an African American man. The story, like Hollywood, is a palimpsest based on the true story of Peg Entwistle, a failed young actress who committed suicide by jumping off the H of the Hollywood sign.

It’s a project that vindicates the industry standards and shows the darkest side of Hollywood. It’s important to mention that the lead actress, Camille, is black. Until this movie, the color of her skin meant that she always had to play the role of the maid or the servant.

This context is superbly portrayed in the series and makes the viewer think of Gone with the Wind, how the black actors and actresses were forced to play the roles of the servants. Worse still, that they had to play cartoonish versions of their roles.

Hollywood turns out to be a fairytale with a sense of poetic justice. It rewrites the story to punish evil and reward justice and equality. We see Rock Hudson, who’s able to live his life out in the open. A black actress getting an Oscar for her leading role, and a woman directing a prestigious studio.

Also, it addresses the issue of race with Raymond, a young filmmaker of Asian origin who barely “looks Asian”. As a result of his neutral appearance, Raymond enjoys certain privileges that other Asians don’t.

Thus, it might seem that Hollywood is flippant in treating the issue of male sex workers in a “nice” way, but remember that it’s avoiding the extremes of tragedy and comedy to present the subject without reservations. In other words, re-write the roles and recognize that, for many movie stars, the only way to get to the top was to sell their bodies for sex.

Hollywood is a fairy tale, but that doesn’t mean it avoids critiques. It touches on sex work and acting agents, for example. One standout is Jim Parsons, who moves away from the Sheldon Cooper that everyone knows to show a man who, in addition to having a historical background, in contemporary terms, reminds you of Harvey Weinstein.

The overarching message is that the only thing that’ll change the future is taking action. If 1950s Hollywood had been able to make a project like Meg a success, our present could have been very different.

Whether you love it or hate it, the fantasy of Hollywood reminds its viewers that the fight isn’t over. There’s so much to do, and it’s important to keep the struggle for equality at the forefront. It’s the only way for everyone to enjoy the same opportunities and well-being.