Hieronymus Bosch: Biography of an Enigma

Many people have tried and failed to explain the work of artist Hieronymus Bosch. Today, we'll talk about his life, his paintings, and some of the theories that attempt to explain the enigmatic and disconcerting life and work of this great master. 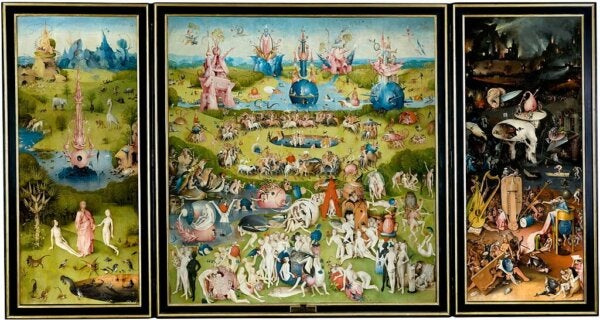 The official biographies of Hieronymus Bosch tell a fairly simple story of this exceptional artist’s life. The most orthodox stories claim that his art was of a purely religious character. However, history also tells us that King Phillip II, who was interested in the occult, was eager to obtain some of his paintings. That contrast is nothing if not ironic.

What we can say for sure is that something in the life and work of this master painter is very difficult to explain. Consequently, it seems as if we’ll never fully understand Hieronymus Bosch. This aura of mystery surrounding the artist has resulted in rumors that he painted in an altered state of consciousness, used occult symbolism, was in a secret brotherhood, had psychological disorders, or that he was a heretic. These accusations were very dangerous during Bosch’s time as they all went against the established norms.

Many have tried to explain his work without much success. You can immerse yourself in writing about Bosch and memorize detailed descriptions of his paintings but you’ll still feel like you’re missing something.

Humans have always been fascinated by mystery, and old, enigmatic paintings certainly provide a lot of fodder for our imaginations. That’s why, in today’s article, we’ll talk about Bosch’s life, what he painted, and why, and review some of the theories that try to explain his perplexing life and work.

Hieronymus Bosch, whose original name was Jheronimus van Aken, was a Dutch painter born in 1450 to a comfortable family of Dutch artists. He was the son and grandchild of painters. Bosch produced some of his most famous paintings about halfway through his life. They were full of evocative symbology and fantastic elements, scenes of dreamworlds filled with infernal monsters.

Some historians believe that Bosch was a member of a kind of brotherhood by the name of Brethren of the Free Spirit. This confraternity was actually a sectarian community of heretical Adamites, who didn’t believe in sin or redemption.

Bosch was opposed to the established order of things, and his ideas were labeled anarchist. Keep in mind, however, that this is only one of the many versions that exist in his biographies. Other historians write that the confraternity he belonged to was called The Illustrious Brotherhood of Our Blessed Lady, whose principles stood in exact opposition to the Brethren of the Free Spirit.

Bosch was relatively free of financial concerns thanks to his marriage to the daughter of a successful, well-positioned businessman. As often occurs when we talk about mysterious historical figures, their biographical data is based on a whole lot of conjecture. Many experts from different fields have tried to clarify the information, but they still haven’t quite figured it out in 500 years.

Hieronymus Bosch and his paintings

Experts often include his paintings in the medieval tradition of painting of exemplary figures of life, death, and sin. In recent decades, however, interpretations of his work have resulted in new theories that contradict the classic theories.

Several authors suggest that his work, especially The Garden of Earthly Delights, which is possibly his most difficult-to-understand painting, could have been done under the effect of some kind of hallucinogenic drug. In other words, altered states of consciousness that immersed him into the same fantasy world of semi-human figures that grace his canvas. His paintings are sometimes truly nightmarish. The worlds he paints resemble something from an awful dream.

In 2016, a team of researchers reviewed and qualified his paintings, which are spread across several countries. They also eliminated some of the questionable paintings and included new ones. All in all, the origins of 21 paintings are uncontroversial. The reason it’s so difficult to know is that he didn’t often sign his work.

Some of the paintings that experts are sure about are The Garden of Earthly Delights, The Last Judgement, The Haywain, The Extraction of the Stone of Madness, The Ship of Fools, and Tryptic of the Adoration of the Magi. You can find some of these paintings in the Prado Museum, thanks to King Phillip’s obsession with Bosch’s work.

Was Bosch painting under the influence of mind-altering substances?

There certainly isn’t a unanimous opinion on the subject, although that’s a rule we could apply to every aspect of his life and work. Erich Peuckert, a professor of German folklore, is one of the most outspoken proponents of this theory. After several studies at the University of Göttingen, Peuckert and other researchers have some evidence to support their theory.

Part of the research was to experiment with a recipe. The concoction was a combination of natural ingredients that they found in a 15th-century recipe. In medieval times, they called it “witch’s balm”.

Researchers exposed their volunteers to the substance to see what would happen. Most of them were sleepy and had strange hallucinations. During their sessions, some of them saw visions of a sexual nature or hellish creatures. Monsters and other elements from Bosch’s paintings also came into their visions.

On the other hand, some studies point to the possibility that Bosch suffered from mental disorders. Whether he was under the influence of a psychotic disorder or some kind of witch’s potion, the fact remains that Bosch’s style is transcendent. It’s hard to know whether he directed the message in his paintings “from” or “towards” the subconscious.

Either way, we’re lucky enough to be able to continue to enjoy Bosch’s work in the modern-day. Try immersing yourself in his art to see what kind of emotions you feel when you get the chance to appreciate one of history’s greatest artists.

3 Lessons from the Ship of Fools Myth
The Ship of Fools myth is, in its very essence, the construction of the concept of madness, society's response to it and the treatment that should be given. Read more »
Link copied!
Interesting Articles
Biographies
Fernando Pessoa, a Most Prolific Writer