Hating the Person You Love: Is it Possible?

Hating the person you love is normal since human beings are paraxodical within themselves. When love is genuine, hate is nothing but a short episode that can be processed. 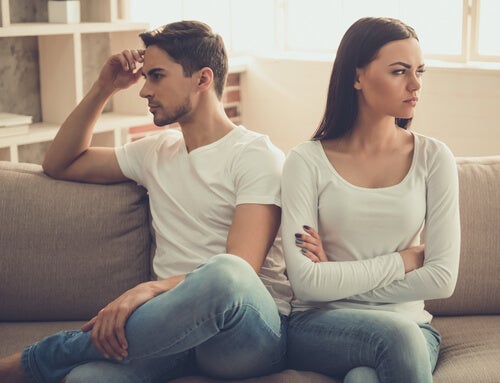 To a certain extent, hating the person you love is quite normal. Many people think that the opposite of love is hate when, in reality, it’s indifference. Hate and love are two feelings that are completely related.

On the other hand, it’s important to remember that only machines are one hundred percent consistent and obedient. If you press a button, it’ll do as you wish. Basically, its own nature prevents it from processing the order in a different way. It has no other choice but to do what it’s told.

On the other hand, human beings process all external and internal stimuli. Many factors affect everyone differently and, as a consequence, we don’t think and feel the same way every day. It’s true that all individuals move within certain parameters that are pretty much stable. However, it’s also true that they’re always changing to some extent. For this reason, it’s possible to hate the person you love.

Love and hate, two sides of the same coin

People rarely ever experience feelings and emotions in a pure way. At any given moment, even the most tender and evolved love can leave some space for hate. Even the most solicitous mothers, for example, may experience rejection at some time toward the children they love so much.

You can end up hating the person you love because love and hate are quite similar. The similarities they share are what makes it possible for you to talk about a shared territory, an emotional interdependence where the other person exerts influence on you and vice-versa. Whatever they do affects you in some way, whether for better or worse. After all, when we love, we’re particularly sensitive to that person’s actions.

Therefore, when your loved one responds to your expectations, feelings of affability, proximity, and positive predisposition become principal. On the contrary, if you’re hurt by that person’s actions, a feeling of hate may appear. It doesn’t have to be a visceral and destructive hatred but a deep rejection of their actions. All of a sudden, you may find yourself sad and angry at the same time. As you can see, it’s possible to hate the person you love.

You let others down and they let you down

Most people idealize their partners when they fall in love. This is like an almost superhuman feeling where there’s no room for contradictions or negative emotions. However, sooner or later, people start seeing that it isn’t really like that. Everything human is paradoxical (humans themselves are a world of paradoxes). Humans are intelligent and clumsy, brave and fearful, and mature and childish at the same time. However, some traits may predominate.

Not even the love humans feel for themselves is completely stable. It’s possible to hate yourself a little from time to time. This may happen when you’re feeling particularly bad about a situation, perhaps even remorseful. You may also feel this way after getting carried away by impulses and doing something that you shouldn’t have.

The bottom line is you let others down and they also let you down. And these letdowns can be major sometimes. You can hate the person you love because, in the end, no affection is exempt from such contradictions.

Hating the person you love

Every great love leaves scars, just like childhood. In fact, most of the time, balance in love only arises after facing difficult or challenging situations such as coexisting. That’s the dynamics of these intense affections. You might hate the person you love sometimes, but it’s also possible to rebuild affection and find a new balance. This is what authentic love is all about.

Each of us could be better. After all, everyone has pieces of themselves they aren’t very fond of. For example, intolerance, conformism, hesitation, or selfishness. Some believe they’re incapable of changing these traits for the better. Nonetheless, that doesn’t make them better or worse, it just talks about their nature.

Don’t be scared of those feelings of hate that sometimes manifest in love. It’s not a pathology, you’re not going mad. Also, they don’t necessarily mean that your love for them is gone or that you’re an evil monster. It’s healthier to accept that it’s possible to hate the person and process this fact in order to keep the feeling from turning destructive. When love is genuine, hate becomes transitory and hardly ever leaves scars.

Feeling Love and Hate at the Same Time
We know what it is to feel love, and also what it is to hate someone. But what happens when they're both felt at the same time? Why do we feel both love and hate towards someone? Read more »
Link copied!
Interesting Articles
Romantic Relationships
What are Growth-Focused Relationships Like?