Haloperidol is mainly used as an antipsychotic to treat schizophrenia and other psychotic or agitation states. In fact, both adults and children can take it. Read on to learn more about it! 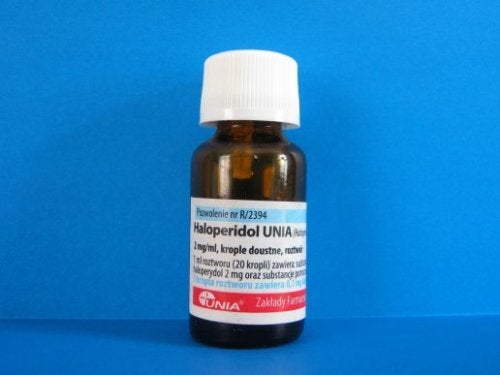 Haloperidol is an antipsychotic or neuroleptic medication. Due to its chemical structure, it’s a butyrophenone. It was first discovered in 1958 by Paul Janssen and it’s a typical antipsychotic.  Therefore, it helps treat schizophrenia’s positive symptoms, such as hallucinations, delusions, or agitation.

It’s a central nervous system depressing agent, so it has sedative effects. This effect is used to treat aggressiveness and agitation.

In people over the age of 18, doctors prescribe haloperidol to treat:

In children, experts prescribe haloperidol as a last resort when other treatments aren’t working or when the patient is intolerant to them. Haloperidol is prescribed to treat:

Also, scientists are currently studying the use of haloperidol to prevent delirium. In low doses, it seems to be useful to reduce the effects of delirium in high-risk patients and patients who are about to undergo surgery. It can also help prevent nausea and vomiting, especially after surgery or chemotherapy. Several studies have confirmed how effective and safe it is for this last specific use.

Haloperidol is a powerful antagonist of dopamine receptors. It acts by blocking central D2 receptors non-selectively. It also blocks alpha-1 adrenergic receptors, but to a smaller degree.

By blocking the reception of dopamine, it reduces any excess of it in the brain. Thus, haloperidol suppresses delusional ideas and hallucinations. It also produces psychomotor sedation, which is useful in many schizophrenia and bipolar disorder cases.

Haloperidol, like almost all psychotropic drugs, can have some side effects. These tend to relate to the mechanism of action. In fact, most of haloperidol’s adverse reactions are due to the dopamine blockage in other areas of the body. The most common side effects are:

Other less common adverse reactions include:

Haloperidol and Other Medications

Experts don’t recommend this medication to be taken with other antipsychotics because it can increase the intensity of adverse reactions. Also, extrapyramidal symptoms might worsen.

A severe adverse reaction can mean the manifestation of neuroleptic malignant syndrome (NMS). Although it isn’t common, it’s best to know about it in order to get an early diagnosis if there’s any suspicion of its manifestation, which is usually at the beginning of the treatment. It produces muscle stiffness, high fever, and arrhythmia, among other symptoms. Thus, it’s important to follow the expert’s advice, as they’re in charge of controlling the treatment and of evaluating its effectiveness and potential risks.

Treatment with haloperidol must start with a small dose. Then, the doctor might suggest to increase it depending on the patient’s response and needs, and also evaluating the relationship between the benefits and the treatment’s cost. Plus, in order to avoid side effects, the dose must always be as low as possible.

Doctors must be careful when it comes to prescribing haloperidol to older patients and young children. In fact, they must adjust the dose and watch for other side effects that may appear.

Paranoid Schizophrenia: Definition, Causes and Treatment
Surely on more than one occasion you've heard someone say "they're paranoid". It is not uncommon for us to use the term "paranoid" for someone who things someone is following them, who wants to hurt them, who makes fun of them or who is against them. Read more »
Link copied!
Interesting Articles
Psychopharmacology
The Use and Abuse of Anxiolytics and Hypnotics

Psychopharmacology
The Indications and Uses of Psychotropic Drugs

The uses of psychotropic drugs are many and varied. They're undoubtedly an important tool in psychology and psychiatry. They've helped…