Greta Thunberg: The Activist Who Wants to Shake Up the World

Greta Thunberg is a young activist who started the Fridays for Future movement. As of now, she's an inspiring symbol for change as she challenges the climate crisis. 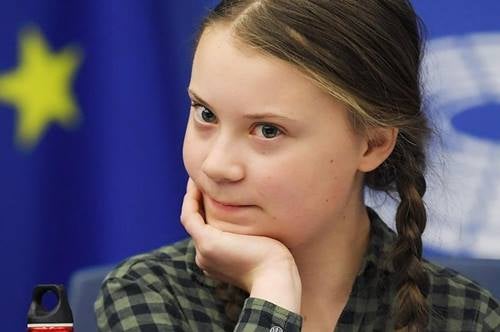 Greta Thunberg may not save the world from the climate disaster that’s on the horizon. However, we’re sure that this 16-year-old girl will achieve something. She’ll be able to wake up a whole generation and rise up as a figure capable of challenging “rich men in grey suits”. Although we may not see results right away, this inspiring movement may help improve our planet and ecosystems.

Sometimes, what society needs are figures such as Greta Thunberg. In some way, most of us don’t like leaders but do enjoy symbols. This young Swedish activist is building a transcendent phenomenon with each of her performances and appearances. She’s the “green girl”. She’s the young woman who wants to change the world. Her message has touched thousands and thousands of people.

Clearly, she isn’t talking about anything new. Most of us were aware of this problem. Climate change is real; it’s happening and the consequences can be irreversible. However, Greta Thunberg is sending the message in another way. She’s focused on getting the youth on her side by giving powerful speeches and  exhibiting challenging behavior. It’s important to note that Greta herself has claimed that her ever-so-strong commitment is due to her Asperger’s.

This young woman has become an icon, making climate change one of the main concerns of schoolchildren around the globe.

Greta Thunberg was born in Sweden on January 3rd, 2003. You may not know this, but her family is well-known in the world of arts. Her mother, Malena Ernman, is an opera singer; her father Svante Thunberg, is a well-known actor, as is her grandfather, Olof Thunberg. Without a doubt, this would make us think that, given the “power” of her closest environment, Greta could be the orchestrated result of a well-planned strategy.

However, her parents have explained more than once that their daughter has always been very conscious of the environment. On top of that, she suffers from Asperger’s syndrome, which usually causes hobbies, interests, or concerns to become obsessions. That’s exactly what happened with Greta Thunberg.

Greta convinced her parents to become vegetarians. When she was 11 years old, she went into a depression due to climate change. She couldn’t understand how the main countries of the world went on with policies that were so abusive and detrimental to the environment. When she was in ninth grade, she refused to go to school. She wanted the Swedish government to reduce carbon emissions based on the provisions of the Paris Agreement.

Moreover, Greta has also suffered episodes of selective mutism. Additionally, she suffers from an obsessive-compulsive disorder, which is why she can’t avoid the planet, as well as its balance, defense, and well-being, from being her main concerns.

No one is too young to change the world

This year, Greta published the book No One is Too Small to Make a Difference. Also, just a few days ago, the young woman crossed the Atlantic on a sailboat to attend a conference on climate change in New York. This conference’s aim was to raise awareness of the need to reduce air travel to avoid carbon dioxide emissions.

Once again, she got media attention from around the world; she was the headline of many newspapers and Twitter was flooded with hashtags related to her. Once again, she spoke to all of us about those rich men who don’t care about the next generations because, according to Greta herself, they’ll be dead before the planet comes to an end.

We must note that she writes her speeches herself and that she was the one who initiated school strikes every Friday. She didn’t care to stand alone. Nonetheless, classmates started to join her little by little. A few months went by and the “Fridays for Future”. speech in defense of the environment crossed the borders of Sweden and reached the whole world.

To conclude, some of what we’re witnessing today is that this era’s key figures are nothing like the ones that existed before, such as Martin Luther King or Mahatma Gandhi. As of now, the younger generations are leading the way, such as Malala and Greta Thunberg herself.

The climate crisis is incredibly alarming and it deserves people like this girl; people who engage others from around the world. We truly hope that her message reaches as many people as possible. Those who are young today will have to face the reality of our world in the near future; and if we don’t make changes now, there’s not going to be a future for them.

Malala Yousafzai: A Young Human Rights Advocate
Malala Yousafzai won the Nobel Peace Prize in 2014, at the age of 17. She stands out because she fights for the education of young girls.  Read more »
Link copied!
Interesting Articles
Biographies
Bob Dylan - Biography of a Legend