There's nothing quite like good conversations, both the ones that you have with your friends or even people you just met, forming a quick and inseparable bond. 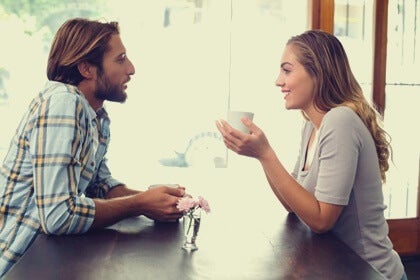 A dynamic chat, stimulating and productive between two or more people, strengthens neuronal mechanisms. You might barely notice it, but with each piece of information received, your “empathy motor” turns on. The dopamine and serotonin circuits activate to regulate a lovely sensation of well-being and motivation.

Most of you have experienced that wonderful injection of positive energy. Even though we talk to several people a day about all kinds of things, people don’t have really gratifying dialogues that often.

Usually, a casual encounter will have you meet with someone you strike a conversation with. Coincidences, affinity, and those good conversations give rise to a magical relationship. For example, this is supposedly how Henry James and Robert Louis Stevenson met.

These two great writers met each other after the publication of Treasure Island. After this first encounter and despite the fact that they had very different personalities, nationalities, lifestyles, and writing styles, they built a close friendship. It lasted for decades through written correspondence, and when they saw each other, they had all-night conversations.

Good conversations and the emotional connection

Surely Henry James and R.L. Stevenson, in addition to being authentic references in the world of literature, would characterize what we now call conversational intelligence. Judith E. Glaser, a psychologist, introduced this term that refers to a basic personal development tool.

Actually, not everyone knows how to keep a good conversation going. Truman Capote, for example, used to say that a conversation is, above all, a dialogue, not a monologue.

However, it’s not a lack of intelligence that limits the quality of good dialogues; it’s the lack of emotional competence. Conversational intelligence is gaining more ground as it touches on dimensions as basic as empathy, social abilities, good judgment, confidence, and integrity.

Conversing is more than talking

Conversing is much more than a communicative process for exchanging information. It’s a profound and enriching act. In the end, dialogues are spaces where two or more individuals interact, something that happens in the animal world as well.

When you converse with someone, only two things can happen: you’re either comfortable or not. It doesn’t matter if you know the person or not. Everyone has work colleagues or family members who they never want to stop talking with.

Other times, you might begin a good conversation with someone you just met, someone you connect with beyond just the interesting information you share. This can give you a subtle feeling of confidence and comfort. In these cases, a path to an emotional universe where high-quality interpersonal connections can be built opens up.

As much as possible, it’s good to foster these connections. Studies such as the one published by Dr. Matthias Mehl in specialized magazines such as Psychological Science remind us that empty, idle, and forced chats cause tension and discomfort.

Because of this, people should be social explorers who know how to establish good conversations. You should always enjoy exciting, comfortable, and enriching dialogues. In the end, that’s where happiness lies: in those safe spaces where you can learn and understand.

Conversation Techniques to Obtain Information
Would you like to learn how to get information without actually asking for it? Here are some conversation techniques that may help. Read more »
Link copied!
Interesting Articles
Friendships
Significant Relationships: Friendships Made of Laughter and Shared Burdens

The countless studies on the health benefits of physical contact basically came to the same conclusion. They found that touching…