Is "Friendship at First Sight" a Real Thing? 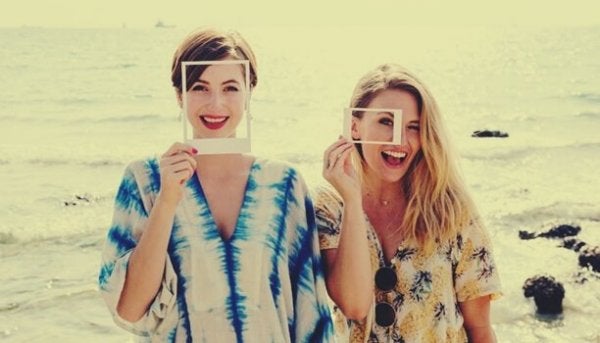 “Friendship at first sight” really does exist. But it’s more about shared laughter than “sight”. It’s born out of that magical “you too??” It’s a happy coincidence, a friend crush that starts with positive interactions which will later be consolidated through emotional support and, most of all, trust.

We’ve all heard of love at first sight. Physical attraction plus the always mysterious but undeniable power of our neurotransmitters come together here. Now, something personality psychologists have wondered recently is if something similar happens with friendship.

Let’s think, for example, about all the social scenarios we navigate every day: workplaces, classrooms, apartment buildings, gyms, parties, public transportation… Is an exchange of glances with a stranger all it takes to know that they could be a good friend? Can first impressions give us reliable, accurate clues?

This same premise was researched by a group of social psychologists in an article published in the journal Social Psychological and Personality Science. The results were fascinating. For example, it became clear that the “friend crush” does exist. We make snap judgments about what kind of friends the people around us would be. We base these judgments on small clues and subtle nuances.

Obviously, our judgments aren’t exactly right. However, that “feeling” that comes from our somewhat skewed impressions is usually right — in 70% of cases. For psychologists and sociologists, friendship is just as fascinating as love, and maybe even more so.

The forces that attract us to a certain type of person and not to others is what makes up our social identity. We all have a desire to surround ourselves with personalities similar to ours.

“Friendship at first sight” happens every day. It happens for that frightened child on his first day at a new school. The child who nervously looks over his classmates and suddenly connects with another child. A child a bit more confident than him, who smiles at him from the last row. Luckily, he’s someone who encourages him to sit down next to him.

It also happens when you start a new job. In the middle of the routine, something unimportant but unexpected happens and it makes you smile — you and just one other person. A smile turns into laughter and then you discover that a special friendship has just begun.

First impressions are like that. They are full of coincidences, emotional nuances, sudden connections. They’re made of quick glances, instant readings, commonalities.

That said, something that may seem magical to us actually has a lot of biological and neurochemical factors behind it. The areas of the brain that orchestrate this type of friendship spell are the amygdala and the anterior cingulate cortex.

The former is related to emotions and, more specifically, to the impulses related to our survival instinct. We all feel that having a good friend by our side will make life more bearable. It makes you feel more protected, happier, and content.

On the other hand, the anterior cingulate cortex is the sophisticated brain region that helps us make decisions and assign a value to both objects and people. Sometimes we do incredibly quickly, and it undoubtedly plays into “friendship at first sight.”

After “friendship at first sight”

Columbia University psychologists Jeremy C. Biesanz and Elizabeth W. Dunn were the authors of the study mentioned above about the “friend crush.” They found something very interesting. “Friendship at first sight” exists, but behind it there are sophisticated mechanisms we have to take into account.

When we connect with someone, we do it based on certain expectations. For example, that frightened child on his first day of school who meets a smiling classmate will say to himself that this child may be his ally in the unknown and somewhat threatening environment of school. He’ll think that the child might be someone to share things with, to play with, and to count on.

“Friendship at first sight” is actually a way to monitor someone we believe has similarities and common interests with us. A person who will be worth investing our time and emotional energy on. Human beings are demanding, and we unconsciously always expect things in return. In the best friendships, it’s a win-win situation, a give and take.

In conclusion, we can say that the “friend crush” is real. And sometimes, it only takes a few minutes to connect with someone in an intense and wonderful way. However, after that first connection based on  a bunch of tiny, biased judgments, only time will tell whether we guessed correctly or not.

After all, any lasting, meaningful, and valuable friendship is based on three things: trust, understanding and positive emotional support.

6 Quotes on Friendship to Make you Think
As social beings, friendship is vital to us humans. But it can be hard to distinguish a true friend from a false one. Check out these quotes on friendship. Read more »
Link copied!
Interesting Articles
Culture
Living with Albinism: Beyond Physical Appearance

Living with albinism isn’t easy. This hereditary metabolic disorder is characterized by the absence of pigmentation (melanin) in the skin,…

Although many of us are spending a lot of time locked away in our houses these days, we still feel…

Culture
Can You Trust Someone You Just Met?

Not trusting people has a lot of negative consequences. You end up isolating yourself from the world and you can…

Culture
Omega-3: The Best Neuroprotector Ever

Culture
5 Ways to Access Visionary Experiences According to Aldous Huxley

Huxley was the author of famous novel Brave New World. He was also a curious and restless man who was…