The Four Paths of Yoga

Discover the four paths of yoga in this article! 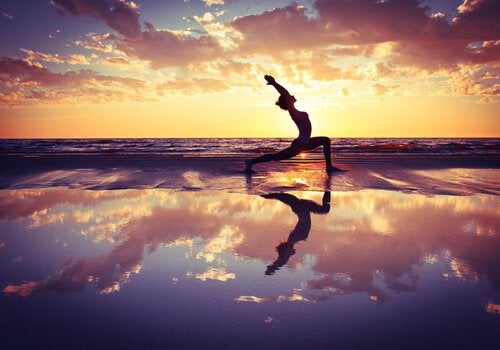 Yoga is an ancient discipline that people nowadays practice like a sport. However, if what we’re looking for is its true practice, we must follow a series of guidelines. In doing so, we have to keep in mind both physical and mental aspects that are equally important. For your comprehensive development, we recommend following the four paths of yoga.

These four paths of yoga stimulate your development on different levels: action, spirituality, wisdom, and physical and mental control.

Karma yoga: The first of the four paths of yoga

Karma yoga is the so-called “yoga of action.” As its name suggests, you consciously practice it. It’s associated with things such as attitude, duty, motivation, and self-sacrifice.

The main goal of the first of the four paths of yoga is religious devotion. We must unconditionally surrender to what we believe in, never second-guessing the outcome. By doing this, we accept that the journey is much more important than the destination. Therefore, we must comply with dharma or religious duty. Karma (or action) must have God as its destiny allowing for moksha (freedom).

There are different ways of understanding this kind of yoga, although this idea of selfless service (which may or may not be material) is common among them. The outcome of this service will be the right one, regardless of whether it’s beneficial or not, depending on the person’s level of devotion.

Doing all of these things helps bring a person closer to their deity. This, in turn, leads to all different kinds of relationships. That’s why some people consider this yoga a religious and non-religious discipline at the same time. Engaging with God through Bhakti yoga can mean befriending a deity while also serving them.

This is the branch of yoga that believes wisdom or absolute knowledge is the most appropriate way to approach God. With this discipline, you discern between the material and the immaterial, between what’s real and what’s not. You also have to control your senses and impulses in order to test your wisdom. Renouncing pleasure and concentration are also very important key aspects.

The followers of this doctrine must have total control of their emotions and sensory experiences and dedicate their existence to knowledge. This is part of their devotion to God.

The last of the four paths of yoga is Rāja yoga. This doctrine considers mental and physical control an essential part of how to approach God. This doctrine isn’t well-defined, which is why it’s been confused or merged with other types of yoga. Of all the yoga types related to this doctrine, Hatha yoga is the one that’s most widespread in the world. It’s based on asanas (poses).

Rājay yoga involves meditation. To practice it, you need to find a quiet place where you can focus on the present and not on external noise. It helps you achieve peace in your day-to-day life.

These four paths of yoga are very old religious practices that are described in books that are hard to understand. Today, we interpret yoga from our Western perspective. It definitely helps people manage stress, relieve back pain, or connect with their spirituality in a different way.

Culture
How We Explain Other People's Behavior

Although it's hard to believe, and even though you see it in others but not in yourself, it's a very…

Coloring, the simple act of illuminating bare surfaces is an exercise of liberation, allowing us to connect with our inner selves. It's quite…