There have been many influential philosophers in psychology. In fact, some of them have greatly contributed to the construction and conception of psychology as we know it. 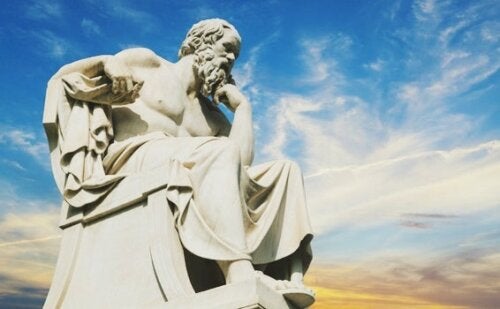 Psychology, as a discipline, was born in 1879 at the hand of Wilhelm Maximilian Wundt, in Leipzig, Germany. He was one of the most influential physiologists and philosophers. In fact, he created the first experimental psychology lab. Since then, this discipline began to answer questions about human behavior by adhering to the scientific method.

Before that, human behavior and any questions circumscribed to it were dealt with by many philosophers through thought and reflection.

It’s difficult to know when psychology originated. Nevertheless, its contributions to human knowledge are over 2500 years old. However, it’s a lot when compared to the age and the path of psychology. Still, it’s quite evident that psychology wouldn’t be the same without a discipline like philosophy. This is because it derives from it.

Many ancient Greek philosophers sought answers to the question “Why do humans behave the way we do?” How did they try to answer it? Through reflection and argument, mainly. In fact, many of the reflections and arguments became philosophical currents, such as Rationalism or Empiricism.

Philosophy has contributed a lot to psychology in these 2500 years. Below, discover five of the most influential philosophers and their contributions to psychology.

He was born in Cordoba, in IV B.C. and was one of the best-known thinkers in history. Furthermore, his philosophical contributions centered on the practical aspects of life. He wasn’t given to the theorization of life, of wandering as an exercise for personal growth.

In a certain way, he’s one of the most influential philosophers. After all, coaching is nothing more than the adaptation of the thoughts of philosophers like Seneca to the current world. Curiously, there are certain parallels between Seneca and the figure of the current coach. This is due to his vocation to help find people’s best version of themselves.

Born in France in 1596, Descartes was one of the most influential philosophers. Psychology isn’t the only discipline he influenced. In fact, other disciplines such as mathematics greatly benefited from his contributions.

The ordinate and abscissa axis used for representing mathematical functions are proof of this. Many people also refer to them as a Cartesian coordinate system.

This distinction is still valid. You may not be conscious of it but people speak of either mental problems or physical problems, ignoring the fact that one and the other are related. This is because it’s a more didactic than real distinction.

“It isn’t enough to have a good mind. The main thing is to use it well.”

Jean-Paul Sartre, one of the most influential philosophers

This Parisian philosopher and playwright born in 1905 gave importance to the concept of freedom, especially in his book, Existentialism Is a Humanism.

According to Sartre, people are fully aware of who they are and how they behave. However, his position is extreme for many. This is because he denies any kind of biological or social determinism. He claims that people are architects of their own destiny because they’re free.

This extreme freedom makes humans undeniably responsible for their behavior and its consequences, and also for their happiness. Even though it’s an extreme concept, this responsibility is definitely granted to patients in therapy.

The heritage of perspectivism in psychology is important, especially in applied psychology. Without going any further, psychologists shouldn’t impose their point of view on their patients in the clinical field. This is because they’d be committing malpractice if they did. Their main task is to make the necessary tools to evoke change available to the patient.

He was born in Athens in 470 B.C. Many consider him the father of philosophy. In fact, he’s one of the philosophers who’s added the most to the construction of psychological intervention.

In psychology, carrying out a good Socratic dialogue is determinant for the future of the intervention. In other words, it’s a question of the casuistry a psychologist treats.

Socrates has been one of the most influential philosophers for psychology, especially in its more clinical aspect. In it, what’s popularly known as Socratic dialogue directly alludes to the Mayeutic, a Socratic method that consisted of making students discover truths by themselves, through questions that made them think and reach their own conclusions.

Some psychological interventions would be meaningless without this method. This is because it allows patients to evoke their own changes without a therapist determining them.

Philosophy is a part of human life, so much so that it not only influences psychology but many other disciplines as well.

Happiness According to 5 Famous Philosophers
Happiness is one of the hardest words to define. Mystical happiness has nothing to do with the happiness of a powerful man, or with that of everyday people. Read more »
Link copied!
Interesting Articles
Philosophy and Psychology
Fulfilling Your Values through Moral Obligation