Élisabeth Roudinesco is an intelligent psychoanalyst who has been able to use the most essential and valuable aspects of Sigmund Freud's theory. Also, she's brought them up to date regarding classical psychoanalysis. 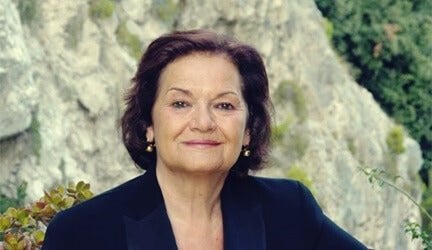 Élisabeth Roudinesco is a French historian and psychoanalyst of great international prestige. She’s currently a researcher at the Paris Diderot University and one of the most authoritative voices in contemporary psychoanalysis. She’s also the author of one of the most beautiful and interesting biographies of Sigmund Freud.

Born into a high-class family of intellectual parents, Élisabeth Roudinesco graduated in Literature from the Sorbonne University. Then, she got her Master’s degree in Linguistics and studied with famous authors of her time, such as Michel Foucault and Gilles Deleuze. She later received her degree of Doctor of Literature.

In 1969, she joined the École Freudienne de Paris founded by Jacques Lacan. She stayed there for 12 years and trained as a psychoanalyst. She has written several books and is currently a contributor to the famous newspaper Le Monde in Paris.

One of Élisabeth Roudinesco’s most interesting works is her biography of Sigmund Freud. Entitled Freud: In His Time and Ours, it’s an extensive story, with great literary beauty, which has received many literary prizes. She declared that her intention was to make a balanced summary of the Freudian legacy. This is mainly because, in the last few decades, the figure of the father of psychoanalysis has been caricatured.

The biography isn’t a vindication of Freudian work, but rather an exhaustive investigation. Élisabeth Roudinesco investigated various myths that circulate around the figure of Freud and their veracity. She was also able to contextualize the genesis of psychoanalysis and its historical meaning.

Roudinesco was able to show psychoanalysis as one of the aspects of a great intellectual ebullition in Europe. Feminism, surrealism, and different approaches to anarchism all occurred at the same time as people acquired more knowledge regarding the unconscious. Freud wasn’t a solitary genius, but one of the mainstays of a very prolific historical moment.

For Élisabeth Roudinesco, one of Freud’s most transcendental contributions was to have ascribed each person the responsibility for their own destiny. Each person must be the hero of their own life. They’re responsible for what happens to them, and even for what doesn’t. In the psychoanalytic field, each individual creates their own story and gives it meaning.

This is diametrically opposed to what behaviorism proposes. Élisabeth Roudinesco defines this theory as “a rather stupid technique, even though it sometimes works”. She expresses this by focusing on the radical nature of what, in this school of thought, is called “objective behavior”. This is the observable or external behavior, which ignores or minimizes the importance of unconscious phenomena.

There are many controversies surrounding psychoanalysis, which some have called “anti-scientific”. Roudinesco points out that it isn’t an easy theory to digest. She claims that, in Freud’s time, everything became psychic and that, today, everything has become organic. She thinks that, in today’s world, the people who suffer just want a pill to try to prevent or solve their problems. That’s why psychiatrists have become drug distributors. However, this model is in crisis.

The evolution of psychoanalysis

For Élisabeth Roudinesco, psychoanalysis must also evolve in several aspects. One of them is to accept new realities, such as homoparental families and sexual diversity. She comments that some of her colleagues think that homoparental families shouldn’t be configured, since they oppose the Oedipus complex. In response to this, Roudinesco says: “In that case, the Oedipus complex should change”. She believes that this conservatism doesn’t suit a doctrine that’s always been libertarian.

She also thinks that psychoanalysis should consider the option of shorter treatments. The speed that the world moves at is different now. Therefore, while retaining the basic option of performing analyses that could last for years, the possibility of shorter processes should also be offered.

Élisabeth Roudinesco believes that it’s possible to approach a specific problem psychoanalytically and not necessarily have to consider the entire life story.

Roudinesco doesn’t believe that there’s more anguish or more mental problems than before. In her opinion, our culture has changed. In Freud’s time, there was a great repression of suffering and unrest. Now, however, this angst isn’t only openly expressed but also clearly displayed. That’s why it may seem that there are more problems these days, but that isn’t actually the case.

Élisabeth Roudinesco is, without a doubt, one of the psychoanalysts who has contributed most to the dissemination of her school of thought. She’s also a brilliant woman, who isn’t afraid of change or self-criticism. She’s an author who’s worth reading and analyzing.