Dolors Aleu Riera was the first Spanish woman to get a medical degree. 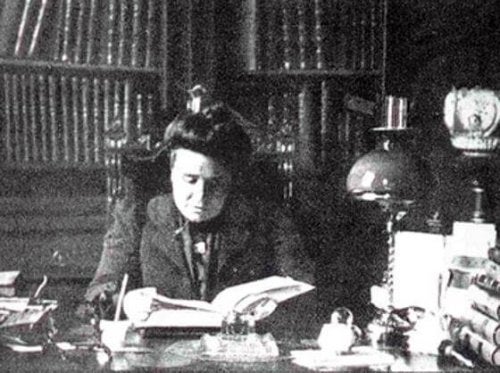 Each and every one of these remarkable pioneers dared to do something different from what others expected of them given their gender. They overcame barriers in areas that, until then, only men could be a part of. Despite the fact that they weren’t allowed to study, teach at a university, or participate in scientific institutions for a long time. Thanks to their courage, determination, and strength, they didn’t only make a difference and leave their mark but also inspired many others. This article is about one of them: Dolors Aleu Riera.

Dolors Aleu Riera was born in Barcelona, Spain, in 1857. Her family enjoyed a well-off position in the 19th-century bourgeoisie in that city. Given her persistent desire to pursue a university degree, her parents allowed her to enroll in medical school at the age of 17.

Dolors was a brilliant student and did well at school, due to the fruit of her effort and vocation. Her parents and peers fully supported her. However, she was also despised by those who didn’t understand how the college could accept a woman. Thus, they booed her and even knocked her against doors. They bullied her to such an extent that she had to have bodyguards for a while. It was a condition imposed by her parents; she couldn’t go back there otherwise.

At first, the Ministry of Education denied her request to sit for the bachelor’s exams and ger her medical degree. Ministry workers wrote to the university to verify that Dolors had in fact completed a medical degree because she wasn’t a man. The university replied that she had enrolled after presenting her high school certificate.

In 1882, at her teachers’ insistence, she obtained permission to take the test at the Ministry of Education. As you can see, this is how she became the first Spanish woman to get a medical degree, and she passed the test with flying colors.

Months later, she decided to do her doctoral thesis and contacted Professor Joan Giné y Partagás. He wasn’t clear on whether he should defend a woman’s right for education before a council that consisted of men. This is because they previously denied her the right to do so, just for being a woman.

Her plea for equality

In the presentation of her doctoral thesis, she wrote a clear plea in favor of equality and equity between men and women. She also harshly criticized the social treatment of the female sex. The fact that women could only raise children and that the system stripped them of all political rights. That they locked women in their homes.

Dolors specialized in gynecology and pediatrics. Subsequently, she opened a clinic in Barcelona with the full support of her family. For 25 years, she cared for bourgeois women who had gynecological ailments and didn’t want to seek medical help from male doctors. Also, she gave medical attention to single mothers, poor working women, prostitutes, and orphaned children.

In contrast, Dolors Aleu Riera also worked as a professor of domestic hygiene at the} Academy for the Enlightenment of Women. There, she taught a general education program and discussed issues of hygiene, domestic medicine, family finances, childcare, and general care.

She passed away at 56, after suffering severe depression as a result of her son’s premature death from tuberculosis.

“We shouldn’t look so intently and so sorrowfully upon the closed door that we don’t see the newly open door.”

Nuria Cuyàs, the great-granddaughter of Dolors Aleu Riera, is currently a famous actress and theater director who paid tribute to her grandmother through the play Barbes de Balena, for overcoming a path full of obstacles. This work uses corsets as a metaphor. These were the garments used for stylizing a woman’s body in the 19th century. They compressed their waist to the point of leaving them breathless.

This play tries to raise awareness about Dolors Aleu Riera’s history of struggle and how she overcame it. She was able to survive and thrive in a world led by men. A world that cornered, drowned, and oppressed women and gave them no possibility to contribute their talents to society.

Marie Curie: Biography of a Woman Trailblazer
As you become familiar with the life of Marie Curie, you realize that she was a trailblazer in every way. She was also the first woman to win a Nobel Prize. Read more »
Link copied!
Interesting Articles
Biographies
Erich Neumann, Jung's Brightest Disciple