Did You Know There Are Different Types of Dyslexia? 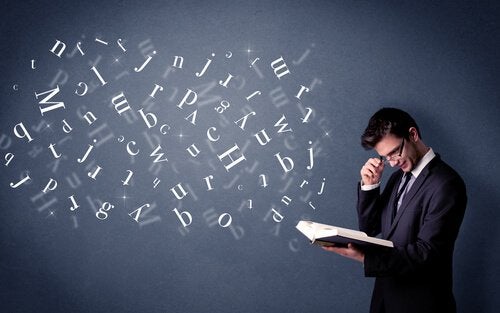 Dyslexia is a disorder that affects the ability to read and understand written language. It involves difficulty in reciting the alphabet, naming letters and analyzing and classifying sounds. Furthermore, in dyslexia, it is common to omit, substitute, distort, invert or add words. There is usually a certain slowness and hesitation, along with visual monitoring problems and understanding deficiencies. However, not everyone with dyslexia suffers from all of these symptoms, and there are actually different types of dyslexia.

To understand these types of dyslexia, it is necessary to know that in reading there is a dual process route. This means that our brain has two ways of reading words, one visual and another phonological. The first of these, the visual route, consists of reading the words as a whole, and using the our surface memory to recognize them. This can only be done with familiar words, since unknown words are not stored in our memory. The phonological route involves reading through a grapheme/phoneme transformation and treating the words individually. This is very useful for reading unknown words.

So, if any of these routes are damaged, then this will result in one particular type of dyslexia. In this article we are going to talk about the different types of dyslexia that arise when different reading functions are damaged. In particular we will look at surface dyslexia, phonological dyslexia, and deep dyslexia.

Surface dyslexia shows that there is damage to the visual path or direct access to words. People with dyslexia can read the regular words perfectly, through a one to one translation of grapheme to phoneme. However, with irregular words that strategy is of no use. They also have no problem reading non-existent words or pseudowords, which is further evidence of damage to the direct path.

Another key aspect of this dyslexia is that the semantic capacity is not damaged. Even dyslexic people are not able to read the word correctly, they can still understand it if someone reads the words aloud to them and pronounces it correctly. Therefore, the damage is restricted only to the subject’s reading ability.

Subjects suffering from phonological dyslexia have a selective disorder of their ability to read unknown words, or pseudowords; while at the same time maintaining their ability to read familiar words. For example, they would have difficulty reading “famulus”, but they could read the word “famous” without any problem.

This shows us that the damaged route is the the phonological path. Therefore, people suffering from phonological dyslexia would be unable to translate words from the grapheme to the phoneme. Because of this they will have difficulty reading those unknown or non-existent words, and ones that are not familiar. On the other hand, since the direct route is perfectly intact, they won’t have any problems reading familiar words.

In these people there is also an added difficulty of being able to read functional words (the, it, a, for example). This is probably because they are very abstract and lack content. But the results of the investigations are sometimes conflicting, and we must be cautious about phonological dyslexia, since there may be more damage than that which directly affects the phonological route.

At first glance, it may seem that surface dyslexia and phonological dyslexia exhaust the possibilities regarding types of dyslexia related to injuries on the dual process route. However, there is one more type of dyslexia, which is quite a surprising one. It is called deep dyslexia. Despite its similarity with phonological dyslexia, it has a defining characteristic – semantic paralexia.

Semantic paralexia occurs when the subject, instead of reading the written word, produces a different word but one that has a meaning that is related to the original word. For example, instead of the written word “daughter”, the patient is likely to say the word “sister”. It is a very interesting phenomenon, which indicates the existence of injuries which affect how the person determines the semantics of different words.

Another key aspect, which can show us the extent of the semantic damage, is that the imaginability of the word shows the degree of difficulty in the person’s reading. Where the person has difficulties in building a mental image of the concepts involved, then there will be a worse reading performance. On the other hand, when those concepts are easy to represent mentally, then the reading performance will be better. This shows us that the person has difficulties when searching for the word within the semantic network. Because of this, the more mental data there is available, the easier it is to locate and read it.

Dyslexia is a complex disorder that gives us a lot of information about our ability to relate to language, and how this function works. Understanding the different types or categories helps us understand the structure and functionality of the language. For this reason extensive research and investigations are necessary if we want to have a deep understanding of the fundamentals of communication and to be able to detect the origin of possible failures in it.

If Your Child Has Dyslexia
If your child has dyslexia do not despair; your child can still achieve anything he or she wants. Read more »
Link copied!
Interesting Articles
Psychology
It's Good to Let Go: Freedom from Resentment

It's good to let someone go, but it's better to do it without any leftover resentment. Free yourself from the…