A recent study analyzed how four of Erik Erikson's dimensions of personality evolve as people age. The results suggest that, contrary to popular belief, middle age is actually a very attractive stage of life. 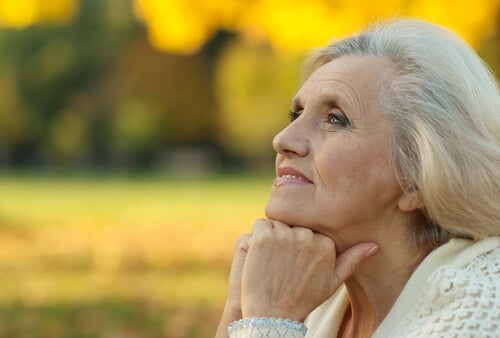 The passage of time leaves a profound mark on all of us. Getting older every year seems to make people sad. A recent study analyzed how four dimensions of personality evolve over time and how, for many people, things actually improve. Surprisingly, researchers found that more often than not, despair dissipates with age.

The four dimensions of personality that the researchers focused on were generativity, stagnation, ego integrity, and despair. These come from Erik Erikson’s personality theory and they refer to the extreme ends of two of the eight psychosocial stages that he proposed. The two psychosocial states in question correspond to the last stages of life.

A series of conflicts that you have to face for your own personal development characterize each life stage. Between the ages of 40 and 60, the conflict happens between stagnation and generativity. Ego integrity and despair, on the other hand, correspond to ages 60 and above.

In this article, we’ll take a look at the traits of each personality dimension in question. We’ll also review the conclusions of this fascinating study from a group of researchers led by psychologists Nicky J. Newton and Elisabeth A. Vanderwater, published in the Journal of Research in Personality.

Generativity is the personality dimension that’s related to the degree of active participation in building a healthy future. This dimension develops understanding and consideration of others. It’s what allows you to look beyond the surface to get at the heart of the problem and offer advice from the wisdom you’ve gained over time.

Stagnation, on the other hand, refers to the lack of personal growth or development of these generative abilities. It’s characterized by a low tolerance for frustration and uncertainty. If you’re stagnant, you’re not good at dealing with issues that require complex analysis.

Ego integrity is the ability to bounce back from difficult situations. In other words, it refers to resilience. Ego integrity is characterized by feelings of satisfaction with one’s life, which is the foundation for good self-control.

Despair, on the other hand, relates to a lack of ego integrity. It’s associated with feelings of desperation, a sense that your life has no meaning. Despair makes you hostile towards others and towards situations that you don’t understand.

166 women between the ages of 43 and 72 participated in the study. The study had four phases over the course of 28 years (1986-2014). During that time, researchers kept track of the four personality dimensions that we mentioned above.

The data showed a consistent increase in generativity and ego integrity between ages 43-70. Stagnation, however, reached its highest levels around age 60 and then started to drop.

Lastly, despair was the first dimension to reach its pinnacle. The highest levels manifest at around age 50, but then drastically drop between ages 60-70.

The research showed that despair dissipates with age, while positive emotions gain strength. During the participants’ last life stages, feelings of despair dissipated as a consequence of increased ego integrity.

Stagnation also fell markedly, while generativity and integrity stayed constant or rose over time. Researchers believe that this reduction in stagnation also relates to a new sense of personal development generated by ego integrity.

In conclusion, these results are very hopeful. It seems as if some good conflict resolution in later life stages could generate a considerable reduction in despair and a significant increase in positive personality dimensions. That’s why it might be wise to face middle-age with enthusiasm and an open mind. If this research holds true, you’ll be more active and resilient during your later years.

Erikson’s stages of life theory
Knowing the stages of an individual, from birth until death, helps us understand their lives. This is where the theory of Erikson's stages of life comes in. Read more »