Description of the Stroop Color and Word Test

The Stroop Color and Word Test is widely used in school and neuropsychological situations. It measures a person's attention, executive functions, and inhibitory behavioral control. 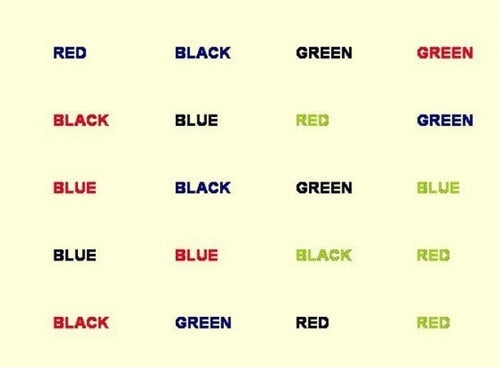 The Stroop Color and Word Test has been used since 1935. It measures people’s attentional control using an interference system. For example, one of the challenges might be to read a series of color names written in a different shade from the one they designate. It seems simple but is actually difficult in practice.

This is one of the most common and popular psychological tests. It’s quite old and largely studied. In fact, it was J.M. Cattell who realized the relevance of this concept in 1886: human beings discriminate colors before words. The reading process is more complex and requires a higher level of attention and concentration.

However, it was experimental psychologist John Ridley Stroop who delved much deeper into the relationship between cognition and inference. He coined the term “Stroop effect”. This idea summarizes the difficulty people have when reading the word “green” written in red. Something like this is quite difficult and doctors use it to evaluate neuropsychological problems.

What does the Stroop Color and Word Test measure?

This test is an attentional test with which to evaluate the ability of a person to classify information from the environment and to react selectively to that information.

How to apply the Stroop Color and Word Test

This test is quite simple to use and apply.

The three phases of the Stroop Color and Word Test

This test consists of three specific yet simple phases. There are three different sheets and five columns in each of them that contain three elements. The subject must do the following.

Read in the first phase

The first task is the simplest and intended to break the ice. At the same time, it introduces the person to the test. To do so, the person gets a list of three words repeated in an arbitrary manner: red, blue, and green. The difficulty lies in the fact that these words are all written in black. Furthermore, the objective is to not make mistakes while reading them quickly.

The second phase is about accuracy in color vs. figure

In this phase, the person gets a second card with a series of figures in different colors. The objective is simple, although not without difficulty for those who aren’t paying attention. The person must first identify the color of each figure. Then, they must state what symbol or figure it is (a square, cross, star, etc.).

The third phase is about inference

This is the best known. There’s a set of words in different colors in this card — red, blue, and green. The purpose here is for the person to read each word quickly and without making mistakes. The difficulty, of course, lies in the fact that these words are names of colors and the color of the type with which they’re written doesn’t correspond to their actual meaning.

How to evaluate the Stroop Color and Word Test

There are two variables to evaluate this test: the number of hits and the response time. Both factors are important because some people might spend an excessive amount of time performing a single task. Thus, the professional must take all the data into account, including the difficulty in understanding the instructions (something common in cases of dementia or drug abuse).

On average, the Stroop Color and Word Test is particularly useful for assessing executive functions in patients with Alzheimer’s disease, schizophrenia, and Huntington’s chorea. This is because damage to the anterior cingulate cortex and prefrontal cortex is usually progressive and noticeable. As you can see, this instrument is as simple as it’s useful. In fact, it’s still valid despite its age but remarkably effective, above all.

The Szondi Test
One of the most curious projective tests in the history of psychology is, without a doubt, the Szondi test, also known as the "fate analysis test." Read more »
Link copied!
Interesting Articles
Clinical Psychology
The SIMS Screening Test: Are These Symptoms Real?

A few years ago, a fellow psychologist said she was unable to understand alcoholics. She didn't understand that self-deception and alcoholism go hand in hand and wondered why people had…