How Depression Affects the Mother-Child Relationship 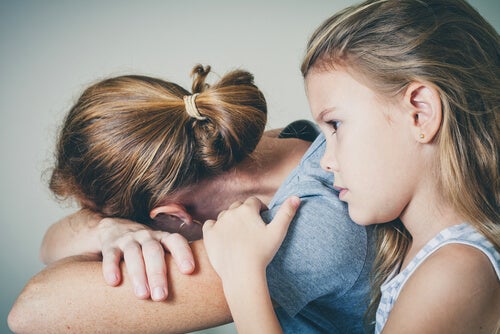 Edwin Hubbell Chapin had it right when he said that “no language can express the power, and beauty, and heroism, and majesty of a mother’s love.” But when depression affects the mother-child relationship, is there something that can be done to help?

Only a mother and her child know the bond that unites them. It’s powerful, strong, and unbreakable if both are determined and the love is sincere. However, there are many external and internal factors that can affect this powerful bond.

Without a doubt, depression is one of the most frightening illnesses of our time. This condition is characterized by feeling misunderstood and lonely. And for a mother, this problem extends to her entire environment, especially her children, who can feel it more intensely than if it were their own.

The influence that parents have over their children determines their development. The mother’s mood has a powerful effect that will be highly important in the first few days of the child’s life.

After giving birth, it’s normal for mothers to be afraid. But this can easily turn into psychological regression, which directly affects the baby. If this occurs, the mother must put herself back together and rise above the situation, but not everybody can do it.

If the depression lasts a long time, the environment will affect the mother-child relationship and the child’s development. The child will suffer and try to fulfill the parent’s demands before asking for their own needs to be met.

Studies on the effect of depression on the mother-child relationship

Donald Winnicott, a celebrated psychoanalyst, was one of the most important figures in the treatment of maternal depression and its effect on children. In fact, his interest in the subject doubled when a woman came to his office worrying about her child’s weight loss.

Winnicott noticed that the mother was depressed. He also identified how being preoccupied over her little one gave her a sense of relief, as it took her mind off of other things she habitually worried about.

Through contact with the child, he discovered that the woman was abused by her husband. He took care of his own self-esteem and happiness at the cost of his wife’s pain and suffering. And it wasn’t until the child became aware of the situation that he started to eat again.

However, despite the child’s improvement, Winnicott recommended that the mother receive psychological treatment, since it would have positive repercussions on her son as well.

Depressed mothers disconnect from their life impulses and deprive their children of the affection they need, to the point where it can affect the child’s behavior. In this article, we told the story of a child who stopped eating, but the effects can vary from child to child.

If children don’t receive security and affection from their caregivers, they’ll create a false sense of self that will lead them to fulfill other people’s desires and please others instead of pleasing their true self.

This whole process can result in them being unable to relate to their peers and their environment. There have even been cases of babies who stopped smiling naturally. They simply maintained the gesture to please others.

How to improve the mother-child relationship

Depression is a complicated illness that’s difficult to overcome. Mothers who have it need a lot of willpower and encouragement to overcome it. Showing affection for the child is one thing that can help.

It’s also important to know that we’re not gods. Being a parent doesn’t mean you know everything. And even if their physical are needs met, children aren’t immune to conflict. We have to face our own problems and help our children do the same.

“Motherhood is the greatest thing and the hardest thing.”

And of course, psychotherapeutic help is indispensable. A good professional can help resolve the situation, prevent the depression from becoming resistant to treatment, and alleviate the suffering of both the patient and their loved ones, especially their children.

Depression can be a determining factor in the mother-child relationship, and it can seriously influence the child’s development. It’s necessary to treat it in the best way possible so the children can have all the happiness they deserve.

The Emotions that Come with Being a New Mother

Link copied!
Interesting Articles
Psychology
The INFJ Personality, the Most Rare Personality (According to Carl Jung)

In 2002, Lundy Bancroft wrote one of the most profound books ever written about the mentality of psychological and emotional abusers.  His…