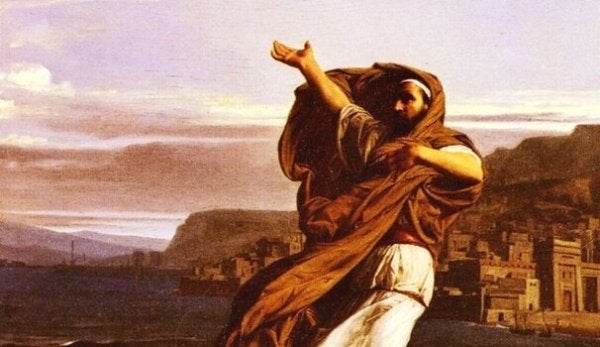 Demosthenes went down in history as the greatest of all the Greek orators. This in itself is a great accomplishment. However, the truly surprising part of his story is everything he had to do for glory. His is one of the most uplifting stories in history.

Demosthenes had many physical defects to overcome. His health was fragile, and he was constantly getting sick. But his most serious condition was his stammering. This, of course, was an enormous obstacle in his path towards becoming the public figure he longed to be. However, with perseverance and hard work he finally found a way for his voice and thoughts to be heard.

“Demosthenes, what talent he had, received from nature and increased with practice. He used everything in oratory. Exceeding in energy and vehemence all of those who competed with him in the gallery and in the forum.”
-Plutarch-

Demosthenes was born in Athens in the year 384 BC. He was a member of a wealthy family. However, his father was a merchant and therefore they weren’t  “aristocracy.” The members of the aristocracy saw trade as unworthy of recognition. Even so, the father of this great orator had a lot of goods and wealth. Among them, he had a knife factory, a furniture factory, and an armory.

When Demosthenes was 7 years old, he confronted the first great challenge of his life. He became an orphan. His inheritance was entrusted to three guardians until the boy became of age.

Two of them were nephews of his father, and the other was a childhood friend. The temporary guardians slowly squandered away his incredible inheritance. When Demosthenes reached the proper age to manage it, there was nothing left.

The legend of Demosthenes

Demosthenes received an education fitting of his position. He had many serious health problems but was a curious and motivated student who always wanted to learn more. That’s why he became a voracious reader. Demosthenes became one of the most educated young men of his time. In fact, a whole story was created around him, which may be some mixture of real and mere legend.

This young Athenian wanted to become the best orator in Greece. He was interested in matters of politics and longed for his ideas to have as much influence as he thought they deserved. He carefully studied the speeches of great orators.

But it’s said that at a very young age he attempted to give his first “conference”, and it was a fiasco. People say that he was booed by the audience. This was due to the fact that Demosthenes had a serious problem: he had a stutter.

His words collided with his lips and couldn’t make himself understood. It’s said that someone in the audience shouted: “Draw the air into your lungs, not your brain!” This really impacted Demosthenes. However, he was determined to reach his goal despite this obstacle, which at the time seemed so imposing.

A process of evolution

Demosthenes viewed the ridicule and criticism as a challenge to his character. He had grown up alone and that had strengthened his temperament. Thus, he decided to fight against his own limitations in order to become what he yearned to be: the best orator. Nobody believed he could do it: How could someone with a stutter give a great speech?

The story or legend goes that Demosthenes set a strict regime for himself to overcome his setbacks. The first thing he did was shave his head. Back then it was very frowned upon to be seen without hair. He did so with the purpose of forcing himself to not go out so that he’d spend all his time working towards his goal. Demosthenes practiced oration until dawn.

When the first rays of sunshine lit up the sky, Demosthenes went to the beach. There he shouted at the sun with all of his might. His objective was to strengthen his lungs. He had accepted the advice of that anonymous person who’d made fun of him.

After performing this ritual, he went back home to practice. And he did so in a very peculiar manner. He put a handful of stones in his mouth and a knife between his teeth. He forced himself to speak without stuttering.

After several years with this training regime, Demosthenes managed to speak normally. From then on he actively participated in the legal and political issues of the city. It is said that his speeches were acclaimed by thousands of people. Not only was he a good orator, he was also an excellent writer. In fact, nowadays, over 2,000 years later, he is still one of the most outstanding figures in history.

Culture
The One Minute Rule: A Method to Fight Laziness

During the last annual meeting of the Society for Neuroscience at the University of Alabama at Birmingham, researchers presented a…