David Healy is one of the most critical and authoritative voices on the practices of pharmaceutical companies, especially in the psychiatric field. His critique raises very important questions about the industry. 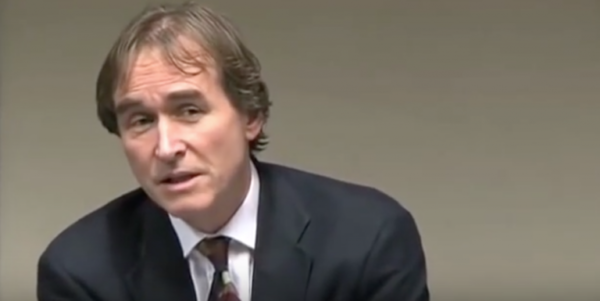 David Healy is part of a group of doctors and psychiatrists who raise critical questions about the practices of conventional healthcare, including mental health. One issue that’s of particular concern is the unethical behavior of pharmaceutical companies and how it’s had a significant impact on healthcare practices.

David Healy is a professor of psychology at Bangor University in the United Kingdom. He’s trained as a doctor, psychiatrist, psychopharmacologist, and researcher. He’s the author of over 150 peer-reviewed articles and another 200 articles published in specialized health journals. Also, he’s written over twenty books about medical subjects.

One of his most controversial and successful books is titled Pharmageddon. In it, Healy makes a detailed analysis of the history of psychiatry and provides some unsettling evidence of the serious mistakes the pharmaceutical industry has made, especially when it comes to mental health. To summarize, Healy spent most of the book showing that medicine stopped being a science to serve humanity and became a billion-dollar industry that exists to make some people rich.

One of the subjects that David Healy severely criticizes is medical patents. During the 19th century and well into the 20th century, the medical community was very vocal against the existence of patents because they took medicine into the world of economic interests. A patent protects the inventor’s rights. When you patent medications, these automatically become products that respond to the logic of supply and demand.

In 1922, for example, the pharmaceutical company Eli Lilly and Company tried to patent insulin. The medical community, however, soundly rejected the attempt. Likewise, Jonas Salk, the inventor of the polio vaccine, had a similar experience and ultimately declined to try to patent the polio vaccine.

Starting in the 60s, pharmaceutical patents started to become commonplace in several countries. As a result, pharmaceutical companies with patented products had a monopoly on certain medications. They could control their price, distribution, and, obviously, their production. While the situation is perhaps more nuanced now, it hasn’t really changed.

The point is that being able to patent medicine means that it’s subject to the rules of the market. Sell more, make the most money possible, and make business as lucrative as possible. The consequences have been disastrous, especially when it comes to psychiatric drugs.

David Healy has published a significant number of articles on antidepressants. He’s found that antidepressant drugs, SSRIs in particular, contribute to suicidal thoughts in depressed patients. There are many very famous and widely-used medications in this group, including Prozac, Paxil, and Zoloft. Healy has insisted that the warning labels on the medications include this information.

David Healy was also responsible for exposing the drug thalidomide, a medication that doctors prescribed for anxiety, sleep problems, and morning sickness, caused a health tragedy in 1962. More than 10,000 children worldwide were born with congenital abnormalities because their mothers took the medication while pregnant. The exposé led to some changes, but Healy believes that the root cause of the problem hasn’t been addressed.

Healy argues that many psychiatric medications cause serious damage. Patients aren’t aware of the risks because no one tells them about the real side effects. Withholding information from the patient is deliberate and complemented by fake research and publications about the medication in question.

One of the things that worries David Healy the most about the pharmaceutical industry is the existence of “ghostwriters”. The industry publishes articles written by unnamed “experts” in the field, but it’s hard to tell where the information actually comes from. Healy himself was a victim of this practice.

In a meeting with the pharmaceutical company Wyeth on the antidepressant Effexor, the company gave Healy the draft of an article for him to sign off on. Healy read it and made two annotations to the article. The first was that there wasn’t any evidence that this medication was better than others of its kind. The second was that taking the medication could cause suicidal thoughts. The company completely ignored his annotations and proceeded to publish the article under his name.

There’s also evidence that the authors of the Diagnostic and Statistical Manual of Mental Disorders (DSM) conduct studies financed by the pharmaceutical industry. The same thing happens in some sectors of the World Health Organization. These are obvious conflicts of interest that are kept under wraps.

In conclusion, it’s easy to see why David Healy has many enemies in the pharmaceutical industry. However, as is the case with other researchers who are also looking into these issues, no one has scientifically disproved his claims, nor has he been sued by any pharmaceutical company.

We can define social roles as the roles we play in society. Social roles detail and represent what activities or…

Culture
Organizing Your Closet to Organize Your Mind

Everyone knows the terrifying, exhausting, time-consuming task that is cleaning out your closet. Organizing, categorizing, and reordering objects and clothing…