Daenerys Targaryen: A Leader in a World of Men

In this article, we’re going to focus on one of the most iconic characters in Game of Thrones: Daenerys Targaryen. Read all about her here! 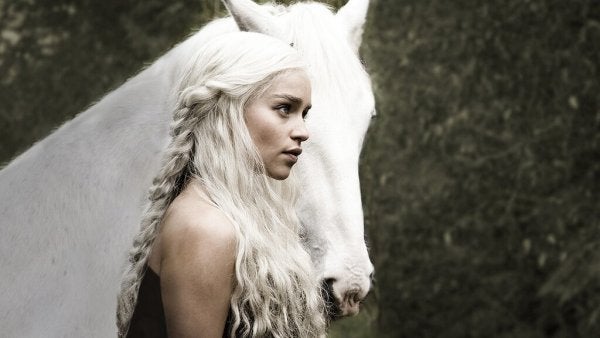 Daenerys Targaryen is a strong and mature woman whose behavior we should reflect on. After seven seasons, she’s become one of the most iconic characters in Game of Thrones. The young woman with white blonde hair has managed to establish herself as a leader after overcoming many obstacles and difficulties.

Brought to life in the TV series by the talented Emilia Clarke, the Mother of Dragons is fierce and determined. In a world where women are still fighting for equality, Daenerys knows exactly what she deserves.

However, Daenerys isn’t an excellent example of proper behavior. To be perfectly sincere, most of the Game of Thrones characters are far from being role models. However, Daenerys has many virtues in spite of her flaws. With a clear goal in mind, she’s decided to correct her ancestor’s mistakes.

Based on the books written by George R. R. Martin, Game of Thrones tells stories of epic battles and power struggles. In this setting, there are various kings and queens, knights, renegades, bastards, and murderers with a common goal. Daenerys also tries to become the ruler of the Seven Kingdoms. But her journey also involves a lot of personal growth.

“I’m a Khaleesi of the Dothraki! I’m the wife of the great Khal and I carry his son inside me. The next time you raise a hand to me will be the last time you have hands!”

Daenerys Targaryen: Breaker of Chains and Mother of Dragons

Game of Thrones is internationally acclaimed. Even those people who aren’t into the show have heard about it. The plot is brutal, unpredictable, and has very beautiful shots and settings.

Daenerys Targaryen begins the series as a princess in exile. She’s dominated by her brother, a crazed and abusive man who trades her for an army. Then, the Mother of Dragons is forced to marry Khal Drogo, who treats her like a slave. But soon after, she manages to gain his respect.

Unfortunately, her life as a wife and mother soon comes to an end. When Daenerys loses both Khal and her baby, she gets three dragons in return. Emerging from the flames as the dragon she is, Daenerys becomes a sort of messianic figure. Little by little, Daenerys organizes a loyal army ready to follow her on her quest to conquer the Seven Kingdoms.

What Does Khaleesi Teach Us?

Being a woman leader in a society dominated by men is hard. The challenges a woman faces in a position of power are varied. However, Daenerys provides a good example of how to manage this power.

1. Letting Go Is Winning in the Long Term

Throughout the series, Daenerys learns all about suffering, there’s no doubt about it. She’s used, wounded, betrayed, and abandoned by many people. And still, the Mother of Dragons continues to hold her head up high. The stronger she becomes, the more Daenerys knows that one of the ways to succeed is just to let go of negative things in order to win.

For example, Daenerys decides to free the slaves from the Bay. She could’ve kept them and send them to fight on her behalf in the battle to conquer the Seven Kingdoms. However, she prefers to release them. Why do this? Because by letting them go, Khaleesi made sure that those who stayed were those loyal to her.

2. Accept Fear but Don’t let it Take Over

As Khaleesi’s ambition increases, the challenges she faces become more difficult. However, this doesn’t stop her. Even when meaningful people die and she loses some battles, she continues moving forward.

During many scenes, one can see how Daenerys’ face reflects despair and confusion. However, she never gives up. Even when she’s afraid, she maintains her purpose. Fear is a normal feeling. And if you’re intelligent, you can benefit from it.

3. You Can Be Beautiful and Strong at the Same Time

Most of the time, society has very high expectations regarding women. In a world of business, women are expected to be both delicate and strong at the same time. Not only that, they’re constantly judged for their appearance and attitude. In some way, there’s prejudice against fashionable women, as if beauty or sensitivity were at odds with intelligence, strength, or courage.

Daenerys shows us that her decisions don’t make her less feminine. Khaleesi is careful and always tries to remain elegant and sophisticated.

Game of Thrones seems to be regretting the way it treated women in the first seasons. Thus, female characters gained light as the series progressed. Certainly, all the women in the series are special.

In our world, women are acquiring more and more power, leading companies, work teams, partnerships, and projects. It’s necessary for television to reflect that. Valar Morghulis means “All men must die”, meaning that death is unavoidable, that no man is immortal. But, as Daenerys noted, no one said anything about women.

Malala Yousafzai: A Young Human Rights Advocate
Malala Yousafzai won the Nobel Peace Prize in 2014, at the age of 17. She stands out because she fights for the education of young girls.  Read more »
Link copied!
Interesting Articles
Cinema, Television, and Psychology
Narcissism in TV and Movie Characters