Cherophobia, the Irrational Fear of Being Happy

Those who suffer from cherophobia are afraid of being happy. Consequently, this fear stops them looking for situations which may lead to happiness. 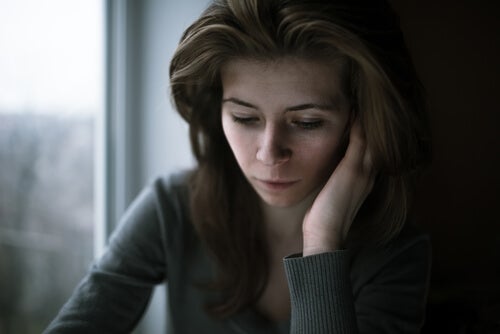 It might sound contradictory, but the fear of happiness exists and is known as cherophobia. It’s an irrational fear which is possibly connected to anxiety. It stops you from getting involved in activities that make you happy.

If you stop and think, you’ll probably realize you’ve occasionally witnessed this phenomenon, either in others or yourself.

The term could originate from the Greek ‘χαρά’ which means happiness, joy, and delight, and ‘φοβία’, which means fear and dread.  However, it’s quite complicated to trace its origins, since the actual disorder doesn’t appear in the Diagnostic and Statistical Manual of Mental Disorders (DSM).

Who’s afraid of being happy?

People suffering from cherophobia often avoid any inherently joyful situations. This doesn’t mean they want to feel unhappy or sad. On the contrary, people with cherophobia reject happiness because it accompanies sadness. What they’re seeking is to not feel sad.

A cherophobia sufferer will often avoid a social event that would make them feel happy. It might be because happiness isn’t permanent or because showing happiness makes others around them feel unhappy by comparison. Either way, they tend to avoid any situation that might awaken a feeling of well-being inside them.

They also tend to withdraw and avoid any kind of positive change in their lives. In short, they stay away from any possibility of ever feeling good, happy, and with any sense of well-being. Some of their typical thoughts include:

These types of people often act defensively. They also aren’t easily persuaded to interact with others. They’re often uncertain and insecure since they don’t control their emotions very well. These negative emotions build up, leading the sufferer to reject any kind of enjoyment and, consequently, happiness.

If you know a cherophobia sufferer, try to remember that inviting them to certain social events may upset them or cause an argument.

One clear example is a birthday party. Here, another person’s the center of attention but you expect the guests to display positive emotions and enjoyment. A person with cherophobia isn’t willing to show these feelings. Similarly, a family meal will be a source of stress for a cherophobia sufferer.

Business dinners, lunch with friends, or other types of social gatherings are also situations a cherophobia sufferer avoids. Basically, they’ll avoid any occasion which centers upon meeting other people.

You might choose not to invite that person or not attend an event they’re going to so you won’t feel worried, uncomfortable, or embarrassed on their behalf. However, the solution doesn’t lie in adopting either one of these positions.

Since it isn’t a clinically recognized disorder, there’s no specific treatment for cherophobia. Despite this fact, sufferers are advised to go see a mental health professional. A psychologist may recommend beneficial exercises, propose solutions to their problems, or offer possible treatments.

However, in the first instance, it’s important to accept that there’s a problem. This is often the most complicated step in the therapeutic process. For this reason, it’s normal for the sufferer to need outside help before making a decision.

Family and friends should be on the lookout in case a loved one begins to isolate themselves in a worrying way. This would be the first warning sign.

It’s important for them to visit the psychologist and to gradually reacclimatize themselves socially. You should urge the sufferer to reintroduce themselves into their social circles and situations they previously avoided.

You should know that you can’t change their personality. And it’s important that their personal choices are taken into account when setting up the therapeutic treatment plan.

You should accompany the sufferer throughout this whole process. This will improve your awareness of the problem. Also, better results will be obtained by being involved in their recovery.

Changes as big, as a person can’t overcome cherophobia overnight. Both the sufferer and the people who want to help must have patience and accept it’s a slow process.

For this reason, it’s better not to set high expectations. This way, the sufferer won’t become frustrated.

Sometimes, people with a psychological disorder are the only ones who don’t realize they need support in their recovery process.

This may happen either by denying the problem exists or being ashamed to talk about it. They’re unable to take the step of requesting professional help.

Only a professional is capable of managing the situation and giving the patient the key to gradually overcoming their problem. Thus, it’s important for the patient to listen to those who recommend them to seek professional help.

If you form part of the social circle of the cherophobia sufferer, it’s important that you assume a protective role. As we mentioned earlier, you must be patient but also take action. For this reason, you can’t remain oblivious to the problem, since this would harm the sufferer.

Finally, you should always take note if a person in your close circle of friends starts to socially withdraw. Like all psychological problems, it must be treated quickly and with professional help. In addition, you shouldn’t forget the people around the patient, as they play a vital role in the recovery process.

How to Break The Cycle of Irrational Fear
Fear is a perfectly normal response that alerts us about danger and activates our survival instincts. When this feeling is directed toward something unfounded, then it becomes "irrational fear." Read more »
Link copied!
Interesting Articles
Culture
My Routine: Energy Saver or Waster?

Psychology Today
The Role of Appearance on Social Networks

People are currently obsessed about their appearance on social networks. In fact, many people live their lives around it. For…