Characteristics and Causes of Metabolic Stress

What's metabolic stress? Why does it appear? What causes it? How is it related to physical activity and muscle mass? Continue reading to find out! 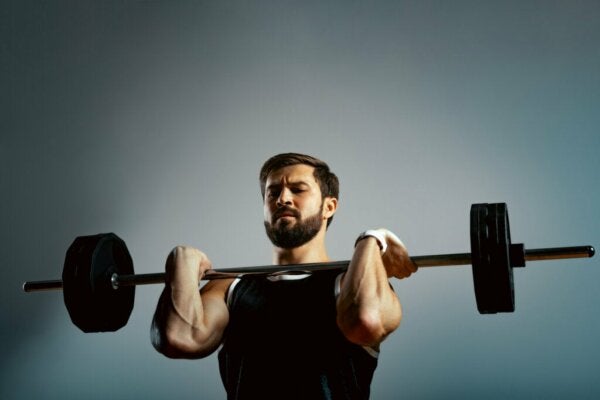 Are you familiar with the concept of metabolic stress? Do you link it to physical activity? This concept alludes to an organic process and, at the same time, to a factor that allows people to gain muscular mass (make their muscles grow). Thus, it’s a process that leads to muscular hypertrophy.

Muscular hypertrophy is muscle growth. In other words, an increase in its size, in the number of myofibrils (formed by actin and myosin filaments) that make up the muscle, or both. But what else should you know about metabolic stress? Why does it happen? What are its consequences? Is it enough to increase muscle mass? Are there other processes one can resort to?

“It would be nice if I had a faster metabolism, because I love food.”

As you read in the introduction, metabolic stress is an organic process that facilitates muscle hypertrophy. One could say that hypertrophy is what bodybuilders or people who work to increase their muscle mass are looking for. To summarize, they could achieve this effect through:

In addition, a person can achieve the maximum gain in muscle mass through metabolic stress without losing mechanical tension, at least according to some studies.

How does metabolic stress arise?

Metabolic stress happens when you increase the workload on a muscle or a certain group of muscles. It causes a progressive increase in muscle growth.

At a chemical level

When you load a muscle, a process called anaerobic glycolysis begins. It produces adenosine triphosphate (ATP), the energy needed for training. This process is what allows people to get the necessary energy to perform the muscle contractions from glucose molecules in a state of deprivation or insufficient oxygen.

Why does it all happen? It’s because the speed with which a person needs this energy is greater than the speed at which glucose oxidizes with oxygen. Thus, it’s a fundamentally anaerobic process.

Metabolic stress and the accumulation of metabolites

Specifically, the metabolic stress one attributes to exercise is the consequence of the accumulation of metabolites. These are compounds produced by the breakdown of nutrients.

Their function is to provide the body with the type of energy it needs, especially during endurance training. All this would cause the muscular hypertrophy response.

Lactate is the main metabolite to accumulate through the process of metabolic stress. It’s a glucose metabolite produced by body tissues in conditions of insufficient oxygen supply. Other metabolites in this process are phosphate, hydrogen, and glucose metabolite (anaerobic glycolysis), among others.

Therefore, what happens when these products build up in the body? Well, according to a 2000 study by Takarada et al., this could increase the secretion of several anabolic hormones. These are testosterone, somatotropin, or growth hormone (STH or GH), and insulin.

Also, according to a 1989 study by Ebbeling et al., an increase in waste products can lead to muscle damage along with a deficiency of energy substrates (ATP).

The importance of replication

Repetitions are one of the recurrent practices of athletes during training sessions, especially of bodybuilders. In addition, their training levels are rather intense. You may be wondering what happens when people train at such intense levels. Well, the oxygen demand exceeds the supply.

In fact, some people believe that hypoxia, the lack of oxygen in certain muscle cells, is a key factor that explains why certain intervals of repetition of exercises lead to increased muscle growth or muscle hypertrophy.

For this reason, it’s interesting to do reps during the exercises, as well as reduce the breaks (to a few minutes) if you want to increase the buildup of metabolites along with the anabolic response to them. Thus, the hypertrophy you achieve would be also greater.

As you can see, one doesn’t only turn to metabolic stress when it comes to gaining muscle mass or achieving muscular hypertrophy, but to other processes as well. Exercising muscle tension and causing muscle damage intense enough to stimulate muscle growth among them.

Metabolic stress is an organic process that would partly explain why the increase in muscle size occurs. You just learned a little bit more about how this process works. However, it’s best to go to a professional who specializes in the subject if you want to train in the healthiest and most effective way.

Stress Rashes and Spots: When Your Skin Reacts to Your Emotions
Stress is very much linked with the skin, and unpleasant manifestations are very common. We'll explain all about stress rashes. Read more »
Link copied!
Interesting Articles
Curiosities
Intimacy and Privacy - The Right to Protect It