Boredom Eating: What it Is and Why it Happens

Boredom eating can be natural but it can also be very unhealthy. Let's explore the nature of this behavior. 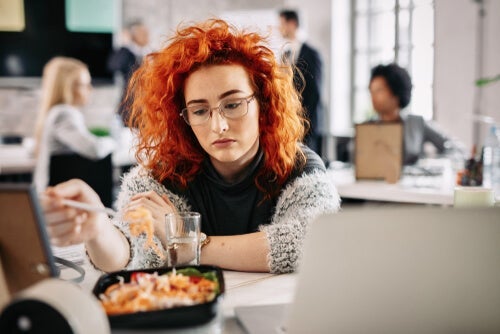 The act of eating can be explained from different standpoints. The most known is usually the biological one. However, there are other explanations everyone should learn. In this article, we’ll be showing you other perspectives that explain boredom eating.

This is something a lot (if not all) people do or have done at least once. For some people, it’s become something chronic, since they do it every day and can’t stop. They may think there’s no way to change it but they’re wrong. In fact, it is possible to change this behavior.

Furthermore, it’s important to remain attentive to the number of times a day/week one carries out boredom eating. This is an unhealthy habit. Remember that overeating can be dangerous.

Additionally, we’ll be delving into the tendency of boredom eating and why it occurs. Lastly, we’ll emphasize the strategies you can use to avoid it and when it becomes detrimental to one’s health.

Eating keeps the body working appropriately. However, this isn’t the only important mechanism in the human body. As you probably know, in order to achieve well-being, individuals need emotional and social balance as well. Sometimes, all those mechanisms come together, and that’s when boredom eating comes to be.

Now, let’s see how the Merriam Webster dictionary defines both of these words. For one, the verb to eat is defined as “to take in through the mouth as food: ingest, chew, and swallow in turn”. Secondly, boredom is defined as “the state of being weary and restless through lack of interest”.

Basically, boredom eating refers to ingesting food when your spirit is tired. This is related with the emotional realm. In fact, we speak of emotional hunger when we have issues we can’t seem to find a solution to and turn to food for comfort.

Why does it happen and is it ever healthy?

Eating is related to a person’s learning patterns. By analyzing various circumstances, it’s possible to determine what drives a person to eat food.

When an individual feels bored, they enter a vicious cycle where their feelings, thoughts, and behaviors intervene. Not knowing what to do can be overwhelming for anybody. As a result, the person tries to break that circle by looking for something to entertain themselves. In this case, it’s food.

We all know how difficult it can be to deal with the mind. Thoughts, negativity, and worries racing through your head. In a situation like that, it’s pretty common to find a defense mechanism that can help cope with all that anguish. Thus, the main characteristic of boredom eating is its urgency. It has no limits and produces guilt and shame; whereas physiological hunger is gradual, it can wait, and it usually doesn’t produce negative emotions.

In fact, different pieces of research emphasize the relationship between overeating and emotions. For example, Cordoba, along with his colleagues, in their article published in the Journal of Health Psychology, show how people tend to overeat in the face of negative emotions.

Furthermore, it’s vital to remember that eating is a learned behavior and that all individuals are conditioned to eat at certain times. It isn’t uncommon to unconsciously try to fill empty spaces with food. As a result, people begin to associate emotions with situations that they already experienced and where they turned to food to feel better.

This way, every time a similar situation comes around, that person instantly thinks about the one thing that comforted them at the time: food. This can become unhealthy if done excessively (when the individual makes a habit out of it).

Also, don’t forget that the act of eating causes the release of neurotransmitters such as dopamine. This, of course, may encourage someone to move forward with their boredom eating habit.

On the other hand, there are times, such as stressful situations, when not knowing how to react may instantly drive the person to eat out of boredom. This can be part of an adaptive and natural process as long as it’s circumstantial.

Some strategies to avoid boredom eating

Boredom eating is an act that doesn’t always occur consciously. Identifying it would for sure add to your well-being. Are there strategies to help you avoid doing it? Let’s see.

Now, you can seek help from a professional to carry this out. For example, you may turn to nutritionists, doctors, and psychologists. The important thing here is to find strategies that make your life as healthy as possible.

In short, boredom eating occurs for different reasons. Sometimes to fill a void, other times as a defense mechanism or learned behavior. For some people, this may be a way to break a vicious cycle. For others, it’s all about the satisfaction generated by the release of neurotransmitters. Whatever the case is, it’s important to identify whether it’s excessive or not. This way, you’ll be able to take measures and change this habit.

Junk Food and Its Negative Impact on Your Brain
Several studies have revealed the power we have over our brain’s health. Read on to discover the negative impacts of junk food on your brain! Read more »

Link copied!
Interesting Articles
Diet and Nutrition
Why Do You Eat More When You're Stressed Out?

Why do you eat more when you're stressed out? The relationship between stress and food has a long history. Stress…

Health
4 Benefits of Physical Activity for the Elderly

It's important for us to stay fit and healthy, taking into account that all of us are continually getting older.…

Health
Your Mental Health: Is It Worsening?

How do you know if your mental health is worsening? People tend not to notice when something's wrong with them.…